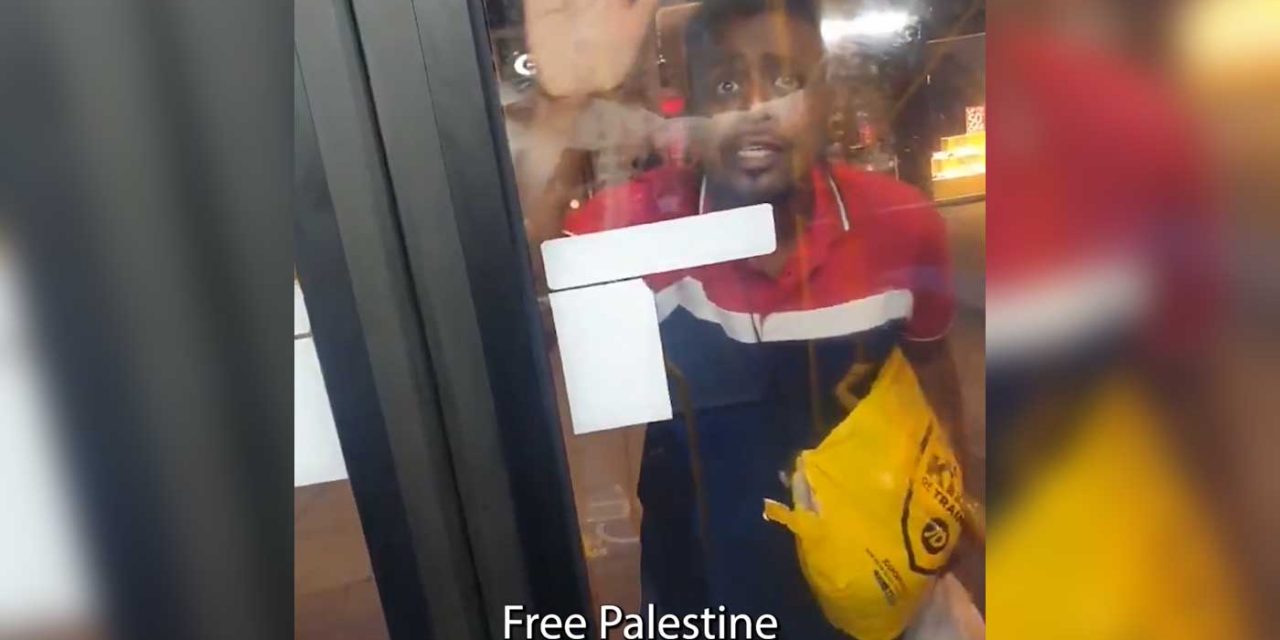 A Jewish man was subjected to vile anti-Semitic abuse in central London over the weekend when he was threatened simply for being Jewish.

Footage posted on Twitter by a user named Shlomie Liberow showed a male aggressively approaching the driver of the bus before leaving the vehicle via the front door and shouting: “He’s Jewish – you’re f**king Jewish too.”

The same male then put his face against the closed exit door of the bus and looked inwards at the person filming him, raising his middle finger and then shouting “free Palestine” while banging on the bus door.

The audio of the threats to “slit your throat” can be heard via the Sound Cloud audio below, along with the audio of the conversation before the man is kicked off the bus.

Liberow tweeted: “My brother [who is visibly Jewish] was attacked on the 113 bus, heading in direction of Oxford Circus, London at 11:33 PM and threatened to ‘slit his throat for Palestine’.

“Will anything be done about this rampant antisemitism.”

He added: “All information is there for Metropolitan Police (to) address (the) fact that identifiably Jewish people face extreme racism on a daily occurrence.”

My brother [who is visibly Jewish] was attacked on the 113 bus, heading in direction of Oxford Circus, London at 11:33PM and threatened to “slit his throat for Palestine”.
Will anything be done about this rampant #Antisemitism @tfl @CST_UK @antisemitism pic.twitter.com/iCKV62rA8b

Shockingly, this was only the first of two anti-Semitic incidents against this same individual in a single day in London.

A separate incident that happened an hour earlier inside the London Underground where a man shouted, “f***ing hate the Jews” while banging on the escalator.

One of a group below the man on the escalator shouts “shut the f*** up”, to which the man who chanted replied, “we’ve got a Jew behind us.”

Some of the men who were standing behind the man on the escalator are Jewish and one of the young men replies, “actually, you’ve got about nine Jews behind you”, referring to himself and his friends around him.

The difference is that only one of the men was visibly Jewish and he was the one being targetted for anti-Semitic abuse.

You can read more about the second incident here.

Responding to Liberow’s Twitter thread Metropolitan Police’s Chief Superintendent Rory Smith said: “This is awful and I’m sorry he had to experience this. I’ve tagged @MetCC and if you could DM them so that this can be fully investigated please?”

Siwan Hayward, director of compliance, policing operations and security at TfL, said: “We are appalled by the shocking incidents. All our customers have the right to travel without fear of abuse or intimidation, and hate crime has absolutely no place on our network.

“We stand against hate crime and are looking into these incidents urgently with the police. We urge anyone who experiences or witnesses hate crime to report it to the police immediately. It’s important that people tell us so we can stop it from happening again.”

The antisemitic incidents were condemned by the president of the Board of Deputies of British Jews Marie van der Zyl. She said: “It is absolutely intolerable that a Jewish passenger travelling on public transport should be subjected to disgusting racist threats and abuse in the UK in 2021 not once but twice on the same day. Those responsible should be must be tracked down and prosecuted.”

It is shocking that one individual could be subjected to two separate anti-Semitic attacks, both different in nature, in one single day. It shows there is much to be done to protect the Jewish community in Britain.