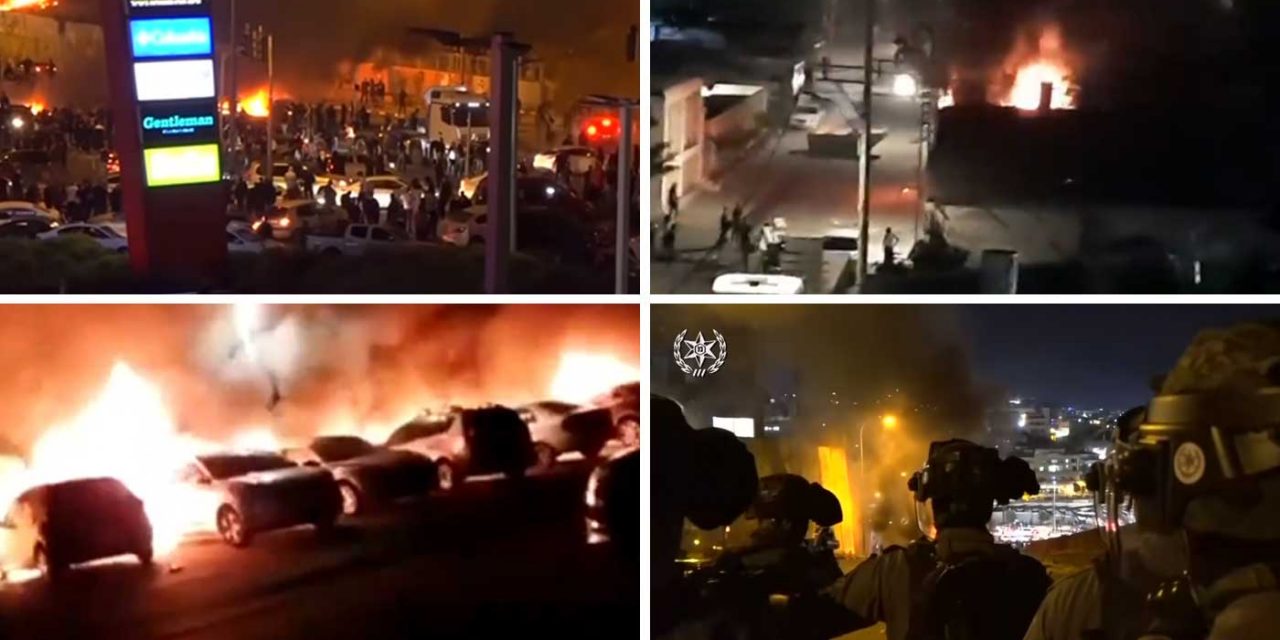 The Israeli city of Lod experienced intense anti-Israel and anti-Jewish rioting on Tuesday which overwhelmed police, threatened Israeli lives and have been likened to pogroms and Kristallnacht.

Lod is a mixed Israeli city where Jews and Arabs live side by side. Located in the centre of Israel, and well within Israeli territory, residents of Lod are Israeli citizens and all have the same rights as each other. However, the rioting of Arab Israelis in targeted attacks against Jewish places of worship and even on Jewish cars and home, has threatened to tear apart peaceful coexistence between the Israelis of the city.

🔴A synagogue is burning in Lod

Arab rioters ransacked the streets, burning cars and buildings, particularly targeting Jewish synagogues. These were religiously motivated attacks and shows that some Arab Israelis sadly appear to have more loyalty to the terrorism of Hamas than they do to the country they live.

Lod resident Shiloh Fried told Channel 12: “Gangs of Arab youths are going street to street, burning stores, smashing windows… Jewish families are huddled at home, terrified of going out… Their cars are being set alight outside… Police are nowhere to be seen.”

Some residents reported power was cut in their homes and petrol bombs were thrown through their windows, Channel 12 news said, and police acknowledged having to escort some residents from a community center to their homes as Arab mobs marauded in the streets. A local man, 56, was seriously hurt when hit by a stone slab in his car, and was hospitalized. Another local resident was seriously hurt.

The Israeli Defense Forces have now been called in to handle the unrest as the police force of the city was overwhelmed. Lod Mayor Revivo had warned “this is too big for the police.”

“This is Kristallnacht in Lod,” Revivo said on Channel 12. “I have called on the prime minister to declare a state of emergency in Lod. To call in the IDF. To impose a curfew. To restore quiet… There is a failure of governance… This is a giant incident — an intifada of Arab Israelis. All the work we have done here for years [on coexistence] has gone down the drain.”

Arabs set on fire a Synagogue in Lod city. In this video you can see Jews rescuing Torah scrolls from the burned house of worship. Breaks my heart. 💔 #IsraelUnderAttack #Israel pic.twitter.com/k3TkDsmOuV

“All of Israel should know, this is a complete loss of control,” Revivo added, sounding desperate. “This is unthinkable. Synagogues are being burned. Hundreds of cars set alight. Hundreds of Arab thugs are roaming the streets… Civil war has erupted in Lod… The Orthodox-nationalist community here has guns. I’m imploring them to go back home but they understandably want to protect their homes. Molotov cocktails are being thrown into [Jewish] homes. The situation is incendiary.”

Even though we hear from our media that Palestinian and Arab rioters are “armed with stones”, clearly this wasn’t the case in Lod. Below is video footage of Arabs firing machine guns at Israeli police.

Situation getting out of hand in Lod. An Arab citizen shoots at Israeli police with an automatic weapon. #Israel pic.twitter.com/nxPfcAh14V

A state of emergency was declared in the city for the first time in decades, and large Border Police forces deployed to work to restore order.

“Prime Minister [Benjamin] Netanyahu directed that lawbreakers be dealt with severely and that units on the ground be reinforced in order to restore quiet and order to the city forthwith,” a government statement said.

These riots happened as Israel was under fire from Hamas. As rockets rained down on Lod, where Israelis were killed by Hamas rockets, some Israelis reportedly were too fearful to leave their homes to hide in bomb shelters for fear of the Arab mobs.

Last night, Israel truly was under attack from outside and within.

There were reports of Jewish protests in the city, however, these have been dismissed as small gatherings by officials who said they paled in comparison to what the Arab rioters were doing. An Israeli man was arrested by police after shooting dead one Palestinian, however, this has been deemed an act of self-defence as he was being attacked by a mob of rioters at the time of the shooting and fearing for his life.

The mayor of the Israeli city of Lod, a mixed Arab/Jewish city southeast of Tel Aviv, just said on live TV “We have completely lost control of the city, and the streets are witnessing a civil war between Arabs and Jews."
pic.twitter.com/GeFd1eH4yb

“We are seeing a situation in the mixed [Jewish-Arab] cities that we have never seen before, including the incidents of October 2000,” said Shabtai, who rushed to the city. (Widespread rioting broke out among Arab Israelis in October 2000 at the start of the second intifada.)

Israel’s President Reuven Rivlin condemned what he called ‘pogroms’ in the city and said the Arab leadership needs to speak out in light of the recent upsurge in violence.

“The sight of the pogrom in Lod and the disturbances across the country by an incited and bloodthirsty Arab mob, injuring people, damaging property and even attacking sacred Jewish spaces is unforgivable,” Rivlin says. “Tearing down the Israeli flag by Arab rioters and replacing it with the Palestinian flag is a brutal assault on shared existence in the State of Israel.”

“The silence of the Arab leadership about these disturbances is shameful, giving support to terrorism and rioting and encouraging the rupture of the society in which we live and in which we will continue to live once all this has passed,” Rivlin says, adding that the rioters must be punished.

“This country belongs to us all, and more than anything we must be loyal to it and its laws,” Rivlin said.

As Jacob Bardugo said, “What is happening in Lod is an organized nationalist Arab attack on state institutions, Jewish symbols, and the city’s Jewish residents, simply because they are Jewish,” and warned that “the Lod riots are just the beginning of the wave of violence that will engulf the entire country if we don’t pull ourselves together and act now.”