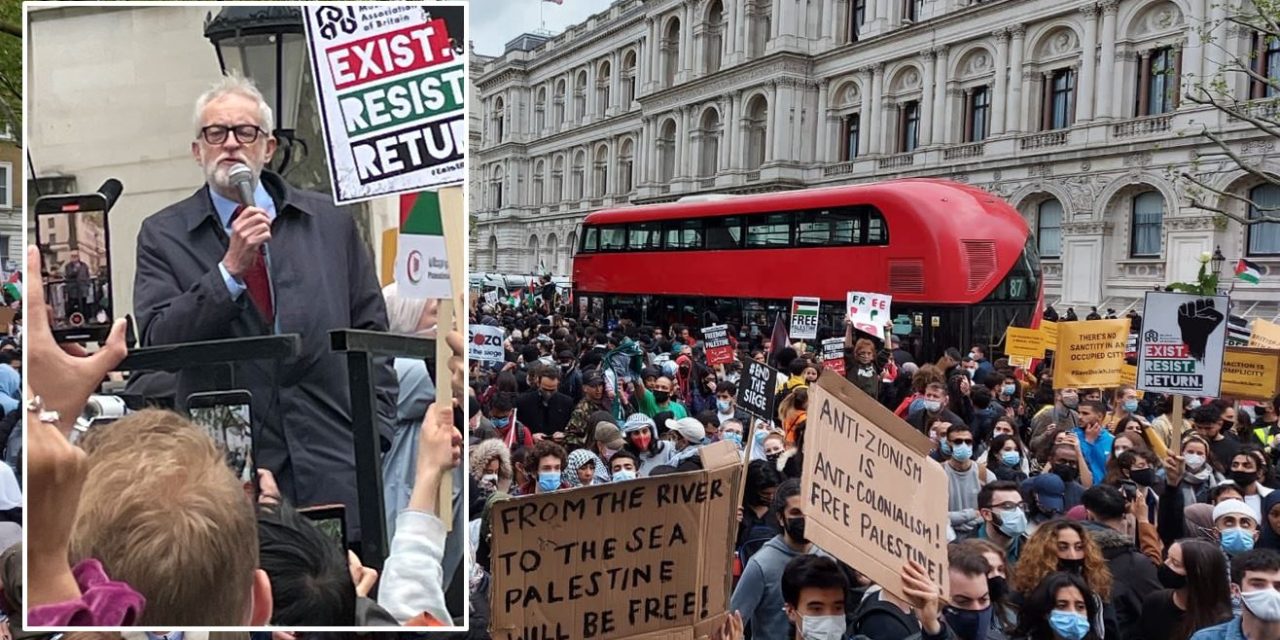 Whilst Israel was being targeted by hundreds of Hamas rockets on Tuesday, thousands of anti-Israel protesters gathered outside Downing Street.

Former Labour leader Jeremy Corbyn told the demonstration in central London that the mounting death toll is a result of this week’s escalating violence in the region was “all because of the occupation of Palestine.”

Corbyn failed to condemn the actions of Hamas, despite the fact that the Islamist terror group is committing a double war crime by targeting Israeli civilians and also using civilians in Gaza as human shields.

Instead, to the cheers of those in attendance, Corbyn said:”The scenes on our televisions of IDF forces attacking worshippers outside al Aqsa mosque, and planes bombing people in Gaza are truly shocking.

Innocent lives are being lost all because of the occupation of Palestine.

Meanwhile, another speaker Joshua Virasami a key leader of the UK’s Black Lives Matter movement told the crowds, “In the Palestinian liberation lies the freedom of black people… in resistance to Western imperialism lies the seeds of a freer world.”

"In the Palestinian liberation lies the freedom of black people… in resistance to Western imperialism lies the seeds of a freer world." @JoshuaVirasami speaking at our rally today to thousands and thousands of you! pic.twitter.com/5ri5TLZz5v

Whilst the former Labour leader was addressing the anti-Israel demo, current leader Sir Keir Starmer was criticised after issuing a one-sided statement that condemned Israeli violence against worshippers in the al-Aqsa mosque – but which failed to acknowledge the barrage of rockets fired by Hamas into the Jewish state.

The Labour leader’s tweet was made at 8.10pm on Monday, hours after news reports showed missiles fired from the Gaza strip into Israel.

Starmer wrote: “The violence against worshippers during Ramadan at the al-Aqsa mosque was shocking. Israel must respect international law, and must take steps, immediately, to work with Palestinian leaders to de-escalate tensions.”