LATEST: Hamas leader says it will work to spread violence to “West Bank” 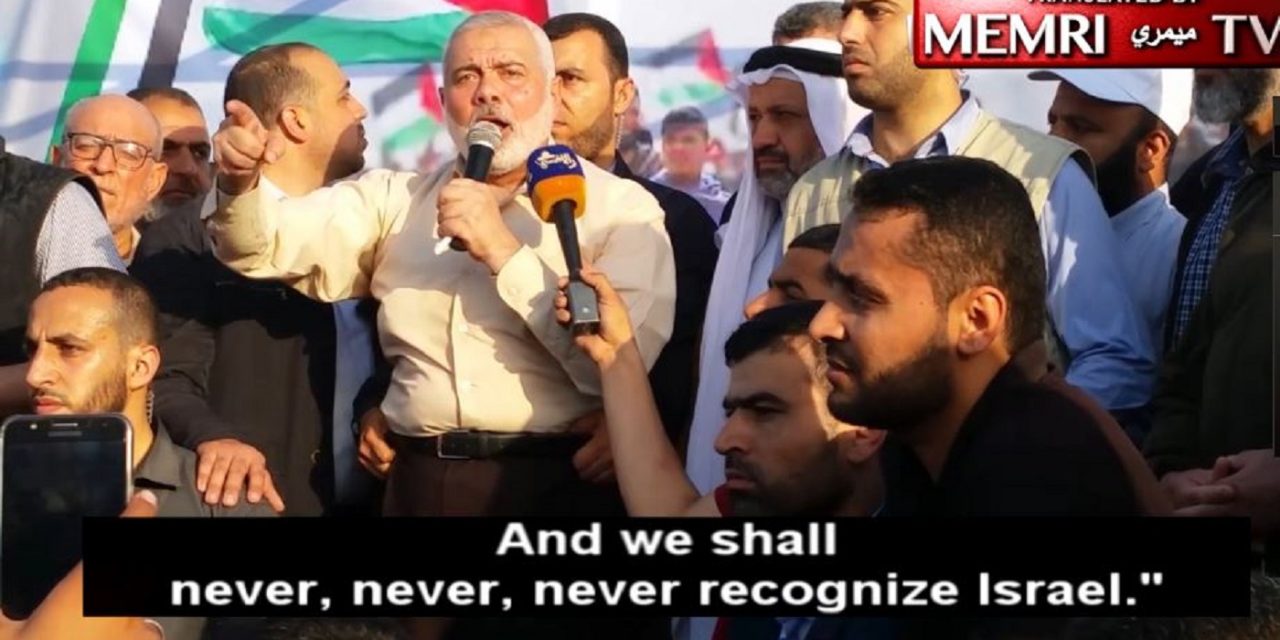 The leader of Hamas says the terror group will work to expand the violent border protests in Gaza to the West Bank.

Speaking at Gaza City’s Great Mosque, Ismail Haniyeh vows the violent “March of Return” protests will continue, after they quietened following Monday’s riots, saying, “The march will not stop until the blockade on the Gaza Strip is fully lifted. We won’t accept half-solutions.”

It follows a turbulent week at Israel’s border with Israel. Around 40,000 Gazans gathered at the border with violent attempts to attack the IDF and breach the border.

Timeline of events this week

~ Hamas leader Ismail Haniyeh vows the “March of Return” protests will continue, after they quietened following Monday’s riots, and they will work to expand to the so-called West Bank
~ Haniyeh dismisses warnings from Israel that it will target Hamas leaders if violence doesn’t end, saying “We grew up on the values of martyrs”
~ Oil and gas pipelines at Israel-Gaza border crossing partially reopen after Palestinians destroy by fire
~ Turkey’s President Erdogan has invited Islamic leaders from 57 countries, including the Iranian president, for an extraordinary summit in Istanbul to discuss development in Gaza

The true face of Hamas…in 100 seconds

MUST WATCH: The people of Gaza are victims of Hamas, a terror organisation which is committed to the destruction of Israel, putting its extreme Islamist ideology above and beyond the interests of Gaza's population.

Posted by Christians United for Israel – UK on Thursday, 17 May 2018

~ A Hamas official says “50 out of 62″ of those rioters killed by the IDF on Wednesday were members of the terror group. A further three were members of Islamic Jihad.
~ A British MP, Nick Boles, who had earlier this week condemned Israel has had the integrity to admit he was “quick to judge” and now says Israel has the right to defend itself. Let’s pray he is the first of many.
~ PM Netanyahu has thanked Angela Merkel for her comments in support of Israel’s right to defend itself.
~ Hamas has today refused humanitarian aid from Israel. Two lorries carrying much-needed medical supplies were turned back.
~ A Hamas official has admitted on Palestinian TV they are deceiving the public when they talk about “peaceful resistance”

Hamas admits it is deceiving the world

WATCH: This Hamas official has admitted they are deceiving the public when they talk about "peaceful resistence"He also confirms on Arabic TV the use of civilians as human shields for terrorists when he says it is “peaceful resistance bolstered by a military force”.#Gaza #Hamas #Israel #Truth

Posted by Christians United for Israel – UK on Wednesday, 16 May 2018

~ Hamas’s leader in Gaza said the terror group had reached an agreement with Egypt to prevent riots on the border with Israel from escalating to a fresh conflict with Israel, but warned it would not rule out the possibility of an armed clash in the future.
~ A number of bullets have hit a house in Sderot, Israel, caused by stray shots fired by Hamas in Gaza. An IDF tank has struck a Hamas post in response. Otherwise protests were relatively calm compared with earlier in the week.
~ Israel has reportedly offered to immediately accept Palestinian patients to Israeli hospitals or to allow the transfer of medical equipment and medicine to hospitals in the Gaza Strip. It follows the refusal by Israel to allow Turkey to airlift the injured.
~ The dispute with Turkey has deepened following the expulsion of Israel’s Ambassador yesterday. Turkish authorities humiliated the Ambassador as he departed for Israel, breaking diplomatic protocol by subjecting him to an airport security check that was filmed on Turkish TV.
~ An Israeli news crew have been physically attacked in Istanbul.
~ Iran’s Tasnim news agency reports Iranian President Rouhani will travel to Turkey in the next few days.

~UK government has called for “independent investigation” into deaths at Gaza border
~ Ireland has summoned the Israeli Ambassador
~ US and Australia have rightly condemned Hamas.
~ Labour leader Jeremy Corbyn has blamed Israel for current situation without condemning Hamas for violence.
~ Labour’s Emily Thornberry went further in placing blame on Netanyahu and Trump.
~ Speaking at the UN on Tuesday, US Ambassador Nikki Haley said Hamas would have been “pleased with the results from yesterday” when 60 Gazans were reportedly killed.
~ The IDF reports that so far 24 of those killed have been identified as belonging to the Hamas or Islamic Jihad terror groups.
~ Turkey has expelled Israeli Ambassador; Israel in return expels Turkish Ambassador to Israel; Speaking at Downing Street, the Turkish president Recep Tayyip Erdogan says country will never recognise Jerusalem as Israel’s capital.
~ Abbas has summoned the Palestinian envoy in Washington back to Ramallah.
~ Israeli Ambassador to the UN Danny Danon has called on the Security Council to condemn Hamas’ “war crimes.”
~ PM Netanyahu has said Israel holds Hamas responsible for placing women and children amid the riots. It follows revelations yesterday that families are being paid $100 to attend.
~ Hamas social media today has circulated maps on the shortest route to Israeli communities to carry out attacks should the border be breached.
~ Earlier, Hamas called for protesters to take knives and guns.
~ The main border crossing into Gaza has been reopened after Palestinians set fire to it for the third time in two weeks, cutting off Gaza’s fuel and gas pipeline. Shipments of medical supplies have crossed today, but Hamas prevented hundreds of lorries of goods, including food, into Gaza.
~ A student organisation in Iran has offered a $100,000 reward to whoever bombs the new US Embassy in Jerusalem, according to Farsi-language reports.

~ 10 explosive devices targeting Israelis were detonated during yesterday’s riots at the Gaza-Israel border; gunfire was reported on at least 3 occasions; 17 kites carrying firebombs were dispatched intoIsrael, igniting 23 fires.
~ Approximately 40,000 Palestinians protested in more than a dozen locations along border fence. Palestinians sources report that 58 rioters were killed in the violence, including a baby who died after inhaling tear gas.
~ Hamas is offering Palestinian families $100 to participate in violent riots at the Gaza-Israel border with higher monetary payouts for wounded rioters and fatalities.
~ There are also reports that Hamas have distributed maps showing shortest root to Israeli communities once border is breached.
~ Hamas press conference last night said, “The mass popular movement and the marches are continuing and will continue… Our people’s marches have provoked the enemy to more bloodshed.”

Today
~ Hamas social media is encouraging the rioters taking part in the violence on the Israel-Gaza fence to bring knives & guns with them, and to kidnap Israeli civilians.
~ Gaza border crossing was set on fire for third time – has reopened today. It follows setting on fire by Hamas of oil and gas lines to cut off supplies to Gazan residents.

Latest reaction:
~ Ireland has summoned the Israeli Ambassador
~ Jeremy Corbyn has condemned Israel for killing dozens of “unarmed protesters”, linked it to President Trump’s embassy move, called for action against Israel, and failed to condemn Islamist group Hamas.
~ The US has blocked call for UN investigation into deaths at Gaza border.