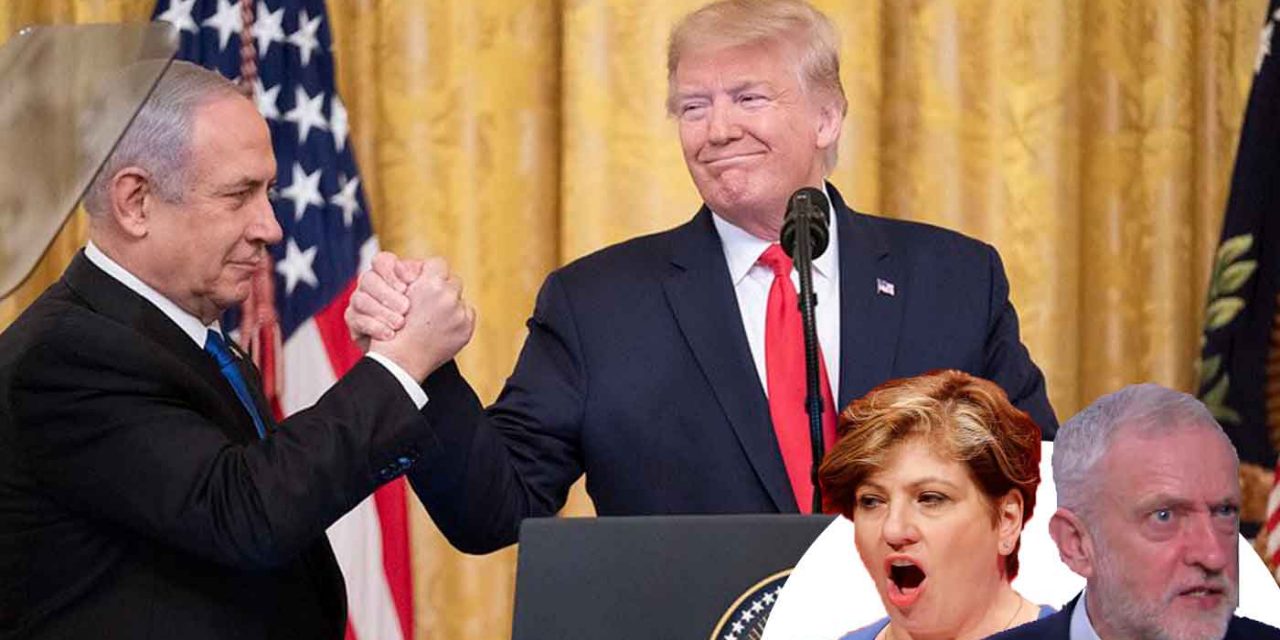 The Labour party has condemned President Trump’s peace plan as a “monstrosity” and called the UK’s support for it a “betrayal” in a scathing attack by Shadow Foreign Minister Emily Thornberry and Labour leader Jeremy Corbyn. One of the reasons they dislike the deal so much is because it recognises Israel’s sovereignty over Jerusalem.

Holding nothing back and using the extreme language we have come to expect from the Corbyn ally, Thornberry condemned the document and its backers, saying, “Trump and Netanyahu – two corrupt, racist, power-crazed leaders coming together not in the interests of peace, not to promote a two-state solution, not to end violence in the Middle East, but simply to further their chances of re-election by doing the opposite.”

She said the plan “destroys any prospect of an independent, contiguous Palestinian state. It legitimises the illegal annexation of Palestinian land for settlers. It puts the whole of Jerusalem under Israeli control. It removes the democratic rights of Palestinians living in Israel, and removes the right of Palestinian refugees to return to their land.

“This is not a peace plan, it is a monstrosity” she angrily declared before slamming the UK and the Foreign Office for supporting “this sham of a peace deal”.

Responding for the government, the junior Foreign Office minister Andrew Murrison accepted that the UK’s vision of a two-state solution was different to that of the plan presented, but said the US proposals should be welcomed as a possible route towards restarting peace talks.

Murrison returned the rebuke by accusing Thornberry of not fully understanding it. “I don’t know whether she’s done more than just skim through it and read the remarks of her researchers,” he said. He explained he had read and studied the 181-page document in full and challenged Thornberry to do the same.

Murrison stressed the UK’s position on the Israel-Palestinian situation by saying, “Our view remains that the best way to agree peace is through substantive peace talks between the parties leading to a safe and secure Israel living alongside a viable and sovereign Palestinian state based on 1967 borders with agreed land swaps, Jerusalem as the shared capital of both states, and a just, fair, agreed and realistic settlement for refugees.”

On Wednesday, Prime Minister Boris Johnson and Labour leader Jeremy Corbyn locked horns on the issue of the peace plan.

Corbyn, a stalwart defender of the Palestinians and an anti-Israel activist, challenged the Prime Minister to “make it clear” to the US that “the British government will stand for a genuine, internationally backed peace plan rather than this stuff proposed by Trump”.

Johnson hit back at Corbyn: “No peace plan is perfect, but this has the merit of a two-state solution. It would ensure Jerusalem is both the capital of Israel and the Palestinian people.

“I would urge him rather than being so characteristically negative to reach out to his friend, my friend, our friends in the Palestinian Authority, to Mahmoud Abbas – for whom I have the highest respect – and urge him for once to engage, to get talking rather than to leave a political vacuum.”

Corbyn angrily claimed that Trump’s plan “will not bring any move towards peace, has no support from any Palestinian anywhere in the world”.

It is true that no Palestinian leaders are supporting this peace plan. However, it is also true that the Palestinians have rejected peace, instead choosing violence with the continued aim of the destruction of Israel. The international community on the hand are singing a different tune.

The countries who have so far rejected the deal are the Palestinians, Iran and Turkey.

It seems that world opinion is more favourable to accepting the deal, at least in the terms of using it to start negotiations, which is positive. Labour and the left-wing of politics has clearly positioned themselves against world opinion on this issue.

US Secretary of State Mike Pompeo urged the Palestinian leadership on Wednesday to provide a counteroffer to the “Deal of the Century” rather than reject it outright.

“We are truly confident that this is a plan that is good for everyone,” he told reporters before taking off to Britain on a five-nation tour. “They are free to come up with a counteroffer if that’s what they think is appropriate. We’d look forward to that.”

“We’re prepared to listen, and I know the Israelis will be prepared to sit down and negotiate on the basis of the vision that the President laid out,” he added.

Pompeo expressed his disappointment that the Palestinian Authority quickly rejected the plan and called for a “Day of Rage” instead, rather than take a deal that provides an “enormous opportunity for a better life for the Palestinian people.”

“It’s the first time the Israelis have ever conceded to a map that actually lays down real outlines of what this will look like and what this means, and it provides a clear pathway for a Palestinian state. This is a real vision.” Pompeo said.

“We hope that all the parties – all the Palestinian people both in the West Bank and in Gaza – will consider it thoughtfully and move forward on this basis,” he added.

As an organisation, Christians United for Israel (CUFI) has also welcomed President Trump’s peace plan as the most pro-Israel peace plan ever put forward.

A brief overview of the plan, released by the White House, said the proposal intended to: