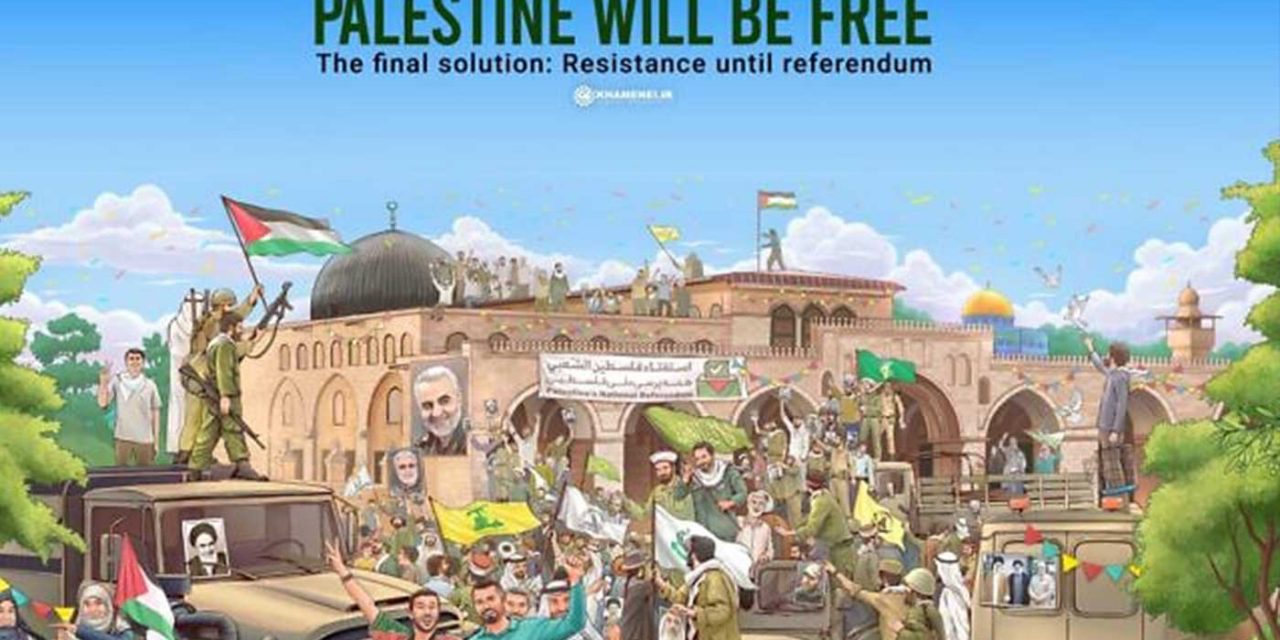 Iranian dictator Ayatollah Khamenei sparked outrage this week after his website shared a “Final Solution” poster depicting Jerusalem as being captured by Palestinian and Hezbollah forces. The ayatollah also this week called for Israel’s destruction.

The poster was shared on Khamenei’s official website and social media accounts and used the phrase “Final Solution”, which is commonly associated with Nazi leader Adolf Hitler’s “Final Solution” to irradicate the Jewish people.

“Palestine Will Be Free. The final solution: Resistance until Freedom,” the text on the poster says.

The United States and Israel immediately condemned the anti-Semitic statement.

“The United States condemns Supreme Leader Khamenei’s disgusting and hateful anti-Semitic remarks. They have no place on Twitter or on any other social media platform,” US Secretary of State Mike Pompeo wrote on Twitter. “We know Khamenei’s vile rhetoric does not represent the Iranian people’s tradition of tolerance.”

Khamenei has in the past referred to Israelis as behaving like a “cancerous tumour” and earlier this week called for the West Bank to be armed just as Gaza is. Pompeo used this anti-Semitic rhetoric to further enforce his condemnation.

“The leader of the world’s top sponsor of terrorism and anti-Semitism denies the Holocaust, sends money and weapons to anti-Israel terrorists, and now has invoked the Nazi call for the Final Solution,” Pompeo said.

Noting Iran’s desire to obtain nuclear weapons, Pompeo added: “I ask all nations: Is this someone who can be trusted with deadly weapons?”

The United States condemns Supreme Leader Khamenei’s disgusting and hateful anti-Semitic remarks. They have no place on Twitter or on any other social media platform. We know Khamenei’s vile rhetoric does not represent the Iranian people’s tradition of tolerance. pic.twitter.com/cfBhyOfFa9

“Khamenei’s threats to carry out ‘The Final Solution’ against Israel bring to mind the Nazi ‘Final Solution’ plan to annihilate the Jewish People,” a statement on the Twitter account of the Prime Minister’s Office said.

“He should know that any regime that threatens the destruction of the State of Israel faces a similar danger.”

Following the public condemnation’s the poster on the website was deleted and Khamanei attempted to explain himself by stating he only wants Israel destroyed and not all Jews.

“This is ‘Eliminating Israel’” he explained, insisting “it will happen.”

Khamenei continued to demonise Israel by claiming that “The nature of the Zionist regime (Israel) is incompatible with peace because the Zionists seek to expand their territories & will certainly not be limited to what they have already occupied”.

Additionally, he said Iran would back anyone opposed to Israel.

“We will support and assist any nation or any group anywhere who opposes and fights the Zionist regime, and we do not hesitate to say this,” the Iranian leader said.

We will support and assist any nation or any group anywhere who opposes and fights the Zionist regime, and we do not hesitate to say this.#FlyTheFlag

“Disgusting that those whose civilization found a ‘Final Solution’ in gas chambers attack those who seek a real solution at the ballot box, through a REFERENDUM,” Zarif tweeted on Thursday.

“Why are the U.S. and West so afraid of democracy? Palestinians should not have to pay for your crimes, or for your guilt,” he added.

Disgusting that those whose civilization found a "Final Solution" in gas chambers attack those who seek a real solution at the ballot box, through a REFERENDUM.

Why are US and West so afraid of democracy?

Palestinians should not have to pay for your crimes, or for your guilt. pic.twitter.com/0jjB9jaljw

The claim by Zarif is that Israel should have a referendum where every “Palestinian” can vote and overthrow Israel by democratic vote. A nonsensical argument coming from a tyrannical regime that has not held elections for the Iranian people for the past 41-years and brutally oppresses the same people it is supposed to represent.

Furthermore, there is no indication that Iran wants to bring about its “final solution” for Israel peacefully. Just this week Khamenei said he wanted to arm the West Bank just as he was already arming Hamas in Gaza. Iran funds and controls Hezbollah, the Lebanese terrorist organisation on Israel’s northern border, an organisation that declares Jihad (armed conflict) against Israel and seeks to destroy Israel and the Jewish people. Iran is also amassing forces in Syria and Iraq, further surrounding the Jewish state militarily. They are sending hundreds-of-millions of pounds to terrorist causes each year whilst the Iranian people struggle for their basic needs.

To top all of this off, the Iranian regime is advancing its nuclear capabilities with the expressed aim of developing a nuclear weapon to destroy Israel. They test ballistic missiles (which are capable of carrying nuclear warheads) and write “death to Israel” on the side of these missiles while they test them.

Sadly, despite all of this obvious aggression towards Israel, there are many countries who are ignoring these threats and continuing to trade with Iran, because of it’s vast oil reserves.

The United Kingdom is one of these countries, which is why we need to put more pressure on our government to end all ties with the Iranian regime until they completely turn away from their hatred of Israel.