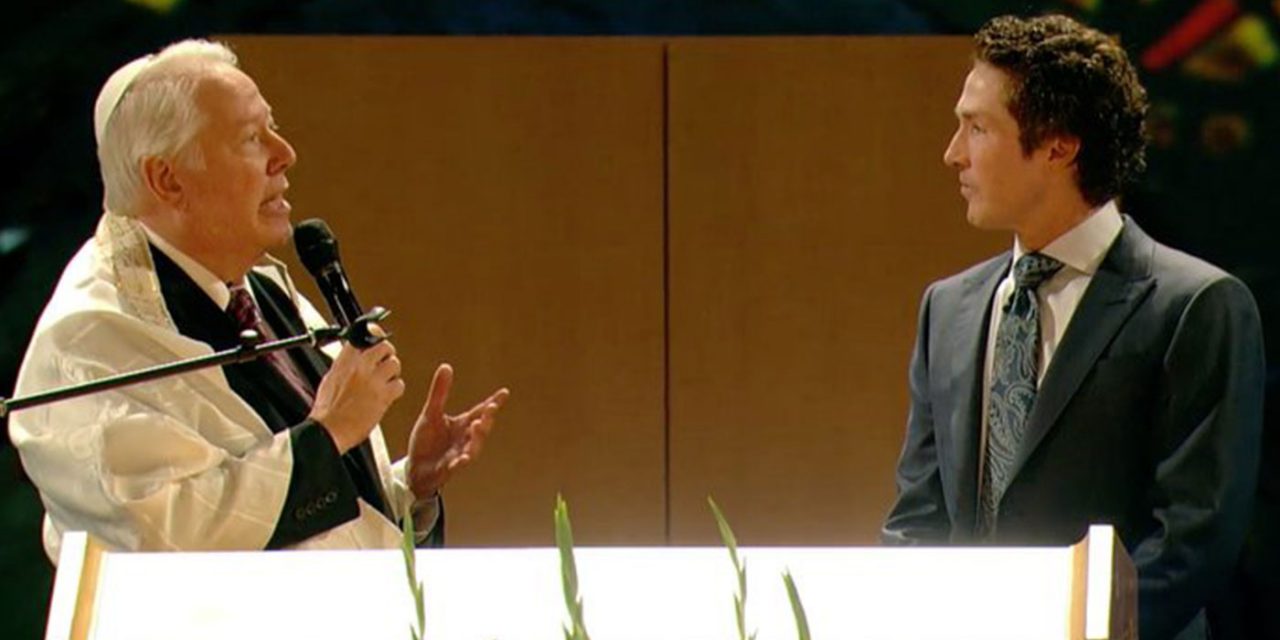 Joel Osteen, an American televangelist and Pastor of Lakewood Church in Houston, has opened his church building to a Jewish congregation after their synagogue was damaged in flooding caused by Hurricane Harvey.

The Jewish New Year (Rosh Hashanah) began last Wednesday, but one of the largest Jewish congregations in America, Congregation Beth Yeshurun in Meyerland, could not use its synagogue because Hurricane Harvey left more than a foot of water inside the building.

“This is the first time in our congregation’s history, since we moved to this site in 1962, that we took on water,” said David Rosen, senior rabbi of Beth Yeshurun. “It wasn’t just a room or a series of rooms. Every square inch of the temple flooded.”

This temple in Meyerland is out as the high holidays are around the corner. What they're doing in meantime at 10 #khou11 pic.twitter.com/aJR8QwCyED

More than 2,000 families attend the synagogue and the high holidays were coming up, the most important time of year for the Jewish people, where more than 4,000 people were expecting to attend services for Rosh Hashanah and Yom Kippur.

In Beth Yeshurun’s time of need their Christian neighbours came to their aid in the form of Joel and Victoria Osteen who offered their 16,000+ seat Lakewood Church to be used while the synagogue was undergoing repairs. The church even moved and cancelled its own events to accommodate their Jewish neighbours.

The first meeting for Congregation Beth Yeshurun took place last Thursday where Osteen received a standing ovation from the Jewish community. Giving a short speech in the middle of a Rosh Hashanah service, Osteen asked those gathered to “make yourselves at home”.

“This is what it’s all about, being friends, being neighbors, being brothers and sisters,” Osteen told the congregants. “It’s interesting how God can take something negative and turn it around and somehow bring good out of it.”

Rabbi David Rosen expressed his gratitude to Osteen, saying, “We found a place where we could gather and pray. You’ve made it so warm for us and so comfortable for us. And we thank you so much.”

The rabbi also gave Osteen a bound version of the Hebrew Scriptures and a shofar, the ram’s horn typically blown at Rosh Hashanah services.

“It’s a call to renewal of your soul, that you’ll be shaken and stirred, if you will, by the sounds of those bright and stirring notes, you’ll be woken up from your inability to respond when you should,” Rosen said of the shofar. “When you hear the shofar blown, you’ll be stirred to action to do your best.”

Lakewood Church announced it would be helping the Jewish congregation in a 19 September post on its website, saying the following:

“During Hurricane Harvey, Houston’s largest synagogue, Congregation Beth Yeshurun experienced devastating flooding. This came at an especially bad time for Beth Yeshurun as the Jewish High Holy Days, (Rosh Hashanah and Yom Kippur), are this week.  Beth Yeshurn’s leadership reached out to us and Pastors Joel & Victoria offered to help. We are honored to announce that we will be opening our doors to the Beth Yeshurun congregation so that they may celebrate their High Holy Days at our church.”

In a letter to his congregation, Rabbi Rosen said, “This may be the time when we need to know we belong to something bigger than ourselves, that we are not alone, that we are part of a beautiful community of family, neighbors and friends from whom we can draw strength and with whom we can face the future together.”

And speaking to Houston’s KHOU-TV, Rosen said, “This is the first time in our congregation’s history, since we moved to this site in 1962, that we took on water. It wasn’t just a room or a series of rooms. Every square inch of the temple flooded.”

“It’s very hard to be out of our temple. There’s a lot of emotion that is captured in this sanctuary. We’ve had people who for 50 years have been sitting in the same seats,” he added.

“I cannot thank Joel Osteen enough for his sensitivity and his encouragement. It’s a reaffirmation of the beautiful spirit of collegiality and interfaith conversation we have here in Houston.”