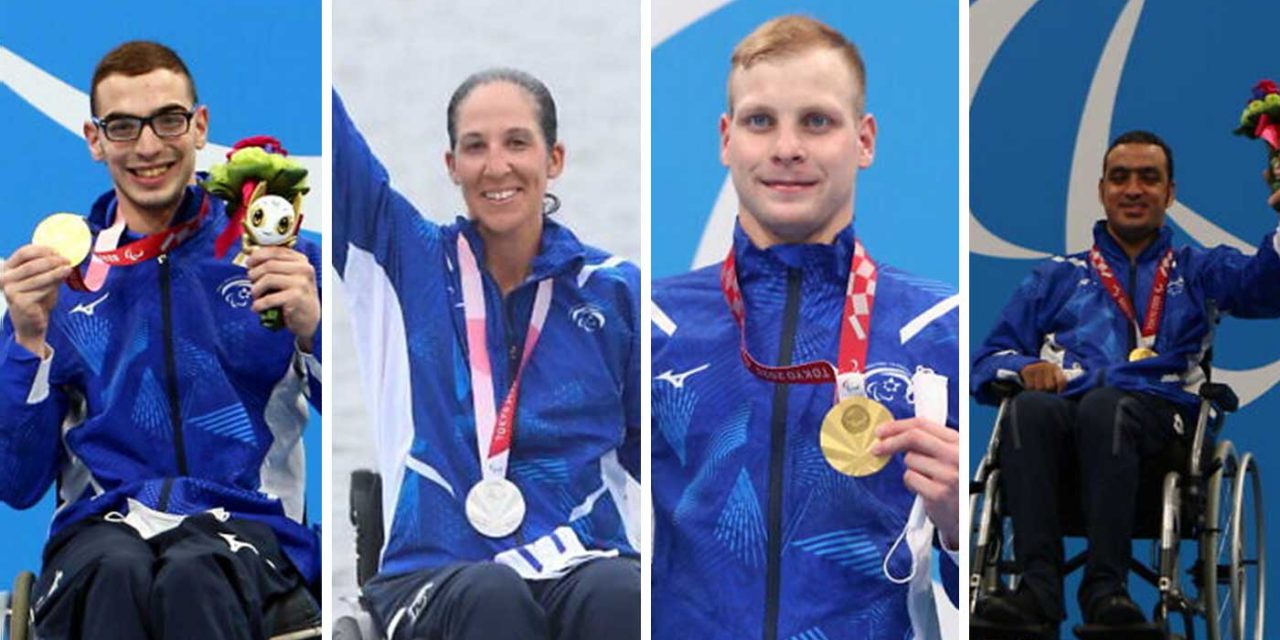 Israel’s Paralympics athletes earned themselves a grand total of 9 medals at the Tokyo Paralympic Games 2020, six golds, two silvers and one bronze. It was the country’s best result at the Paralympics since 2004.

Four Israeli athletes won all of the country’s medals. Three of them were swimmers and one was a rower.

Here’s the rundown of the Israeli Paralympic medallists.

Iyad Shalabi, 34, brought home two gold medals. One for the 100m backstroke and the second in the 50m backstroke both in the S1 category, the most severe disability category. Shalabi was deaf from birth and was paralysed after falling from a roof as a child.

The Tokyo Games were Shalabi’s fourth Paralympics, but his first time winning a medal. His achievement also marked the first time that an Arab Israeli took home a medal at either the Olympics or the Paralympics.

“For many years he didn’t win any medals,” Yusef Shalabi, his father, told Kan last week. “Now, thank God, he won a medal — even two medals. We’ve been waiting for this for many years. [Iyad] is very happy.”

Mark Malyar, 21, brought home three medals — gold in both the 200m medley and the 400m freestyle in the S7 disability category, and bronze in the 100m backstroke. Both Malyar and his twin brother, Ariel, were born with cerebral palsy, and both competed in the pool in Tokyo, although only Mark returned home with hardware. This was their first Paralympics so we expect to see the brothers compete again at future games.

“It’s great to see all of our hard work led us to success,” said Mark on Sunday after landing at Ben Gurion Airport. “There is nothing better than that. I think that we did excellent preparation even amid COVID.”

“I’ve always felt connected to the pool, and I came to prove my abilities without fear,” Dadaon said after landing at Ben-Gurion on Sunday. He noted that while he was disqualified in the 100m freestyle for starting too early, “I had to keep moving after that. I spoke to my coach and he really helped me… we brought home medals and pride and I’m happy.”

Moran Samuel won Israel’s only non-swimming medal at the Games, winning silver in the single sculls rowing competition. She won bronze in Rio 2016 and was overjoyed at improving upon her past performances to take home a medal in Tokyo.

“I’m so happy I could improve it,” she said after he win. “I promised my children that mom is coming home with a medal.” And that is exactly what she did!

Well done to all of Israel’s Paralympic medalists and all the other athletes who represented their country in Tokyo. They have all worked so hard and made their country proud!

We also want to congratulate the British Paralympic team who came second in the medals tally overall in Tokyo. They earned an impressive 124 medals, 41 golds, 38 silvers and 45 bronze medals. Incredible!