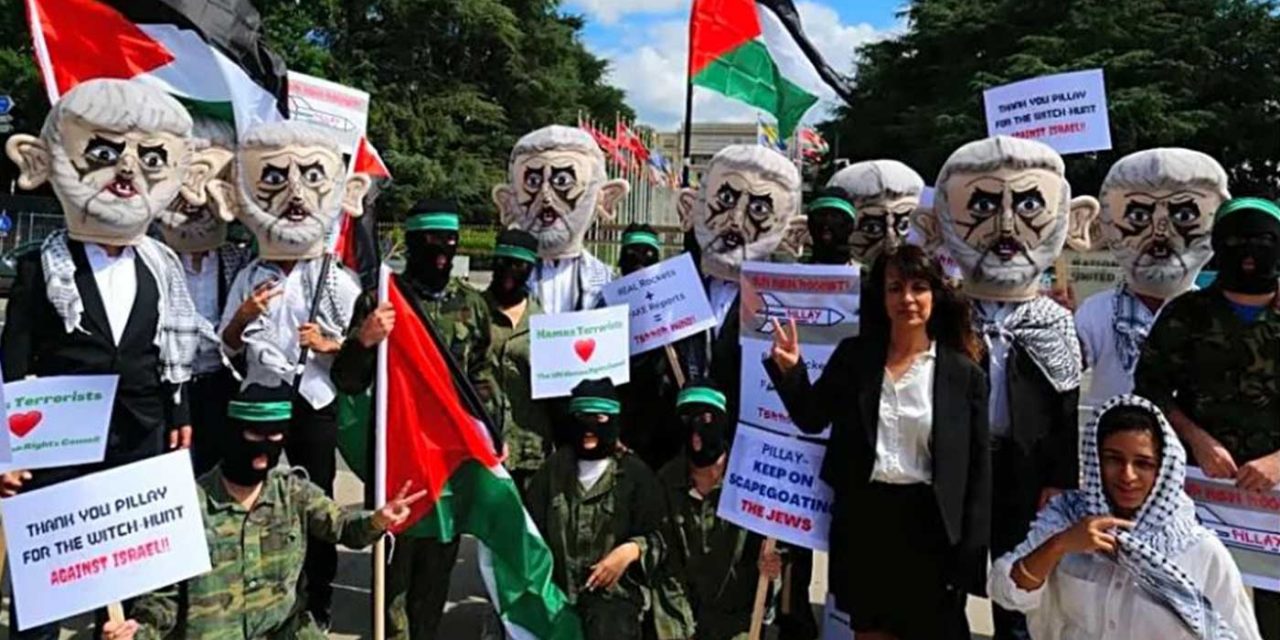 A group of Israeli activists have taken part in a unique protest outside the United Nations headquarters in Geneva in a way that mocks the absurdity of the UN Human Rights Council (UNHRC) and its anti-Israel bias.

The demonstration was held ahead of the publication of a report by the UNHRC which is expected to condemn the State of Israel over alleged war crimes during Operation Guardian of the Walls in May 2021.

Not only is the inquiry more intrusive than any other inquiry in the UN’s history, but it only focuses on Israel’s actions and ignores those of Hamas and other terror groups in Gaza. It is also headed up by an anti-Israel activist.

To show their disdain at the UNHRC’s bias, dozens of Israeli students and IDF soldiers pretended to be members of Hamas, including the groups leader Yahya Sinwar, and held up signs such as, “Pillay – Keep on scapegoating the Jews” and “Hamas Terrorists love the UN Human Rights Council”.

The group who ran the protest, Shurat HaDin, said in a statement: “The UNHRC has long been accused of an obsessive hatred of Israel. Each of its three annual sessions devotes an inordinate amount of time focused on accusing, reporting and condemning Israel exclusively. The Council regularly denounces the Jewish State as a human rights violating regime, while wholly ignoring the terrorism perpetrated against Jewish civilians by the Palestinian Authority and Hamas terrorist organization in Gaza.”

“But even by UNHRC standards, the ‘Pillay Commission’ takes its anti-Israel hostility to new extremes. Established after last May 2021’s armed conflict between Israel and the Hamas terrorist group in Gaza, to investigate so-called “Israeli crimes,” the new COI unfairly directs all its allegations against Israel and the IDF while turning a blind eye to the intentional targeting and murder of Israeli civilians by the Islamic terrorist group. Shurat HaDin accuses the Pillay COI of following in the anti-Semitic footsteps of dozens of prior anti-Israeli resolutions and reports that blatantly ignore heinous human rights violations and genocide worldwide but remains obsessively focused on the Jewish State,” the organization added.