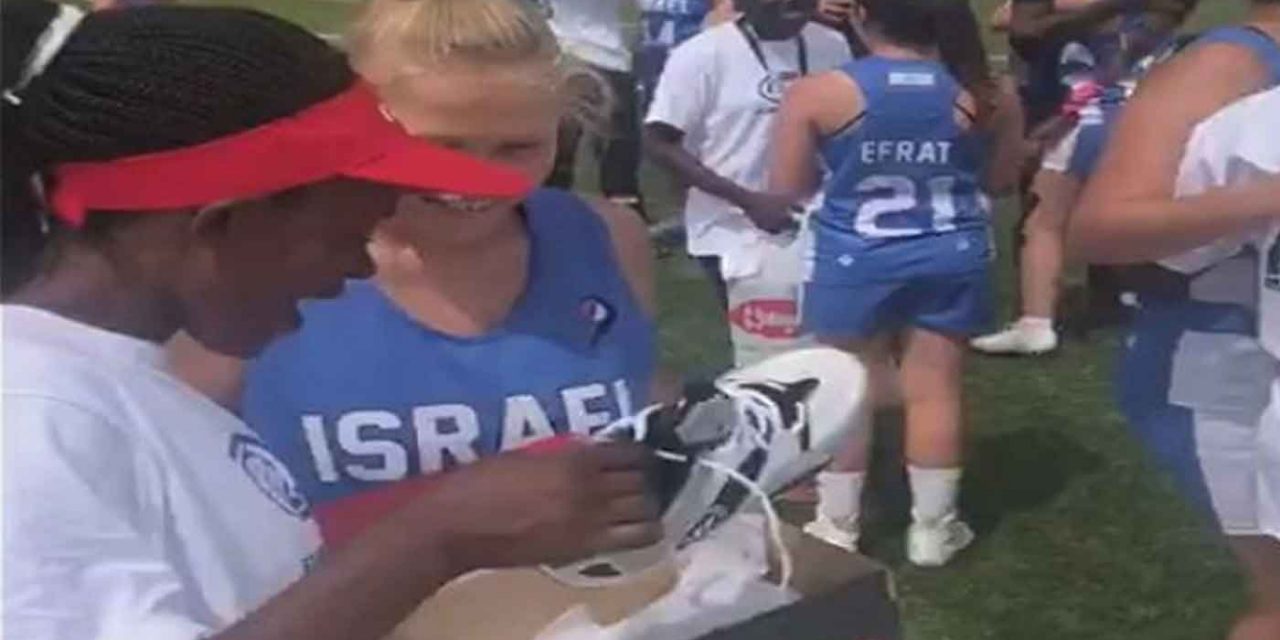 (Times of Israel) Israel’s under-19 Women’s lacrosse team showed some true sportsmanship during the World Championship in Ontario, Canada, last week, after they realized their opponents were playing at a disadvantage.

During their match against Kenya in Peterborough on August 6, the Israelis noticed the underfunded African team did not have cleated shoes as is standard in the sport. The grass was wet from rain and the Kenyans were slipping and having great difficulty with the field conditions. Israel eventually won the game 13-4.

Ashlee Aitken, a liaison for the Kenyan team in Canada, told Global News: “Unfortunately the cleats that they had ordered and sent to Canada all came in the wrong sizes so they had no shoes to play.”

The Israeli team members decided to take action, and spoke with their parents who agreed to fund shoes for the Kenyan athletes. The Israelis contacted the Kenyan coach and discretely obtained the girls’ sizes, then found a store in town that could quickly supply the order.

The next day the Kenyan coach brought his team to watch Israel play Belgium, supposedly in preparation for a game against the Belgian team. When the game ended, the Israeli girls sprung their surprise and presented the Kenyan players with the shoes.

Yesterday we played @Israel_Lacrosse and had no cleats …: after supporting their game today, Israel surprised the whole Team on the sideline with brand new cleats!! 🇮🇱❤️ pic.twitter.com/5ikvEmAihm

Kenya’s Lacrosse Association posted videos of the exchange, with the girls from the two teams hugging each other.

A day later Kenya beat Belgium 16-9. It later played against Israel again and lost, but this time 11-10 — and with a level playing field.

“Our players, coaches, and supporters take pride in representing our country, using our sport as a way of building bridges and connections to Israel,” David Lasday, COO of the Israel Lacrosse Association, told JNS. “They continue to inspire the world winning on and off the field.”

IsraAID is launching a humanitarian response to the earthquake that struck eastern Afghanistan on June 22 and killed at least 1,000 people, injured more than 1,600 and damaged thousands...
Read More
Share
Tweet
Email
More
380 Shares