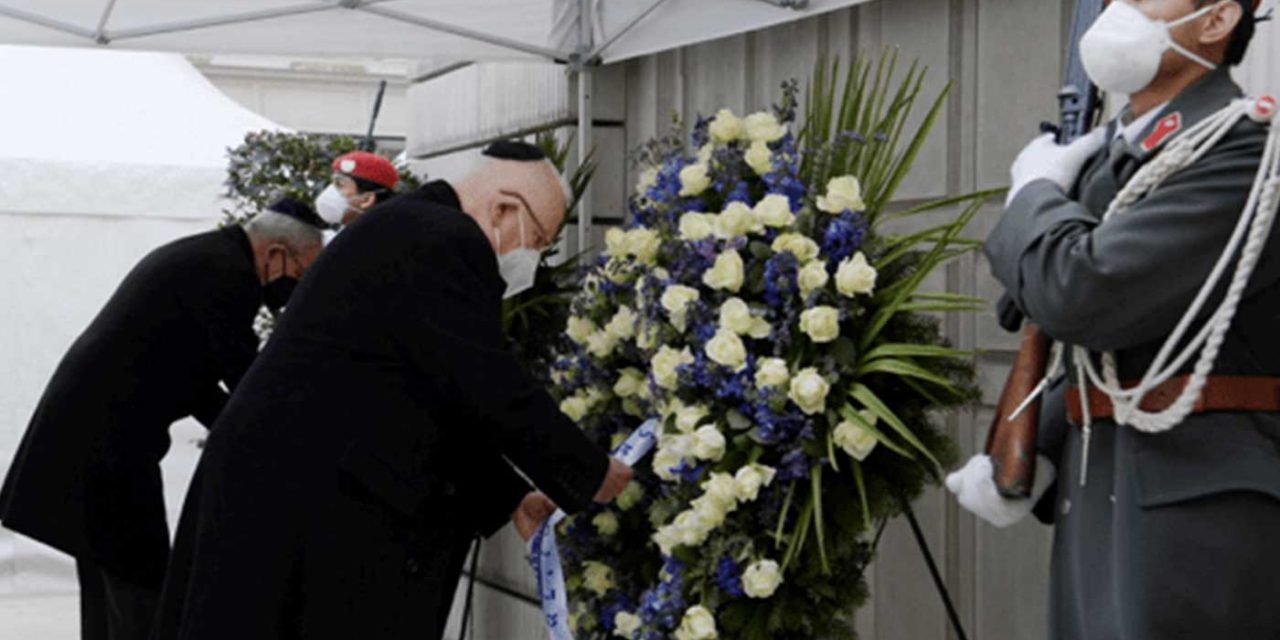 President of Israel Reuven Rivlin and President of Austria Dr Alexander Van der Bellen attended a ceremony this week in Vienna to honour Holocaust victims. The ceremony took place as part of Rivlin’s short visit to Europe where he is meeting with leaders from Austria and France.

The ceremony in Vienna was attended by local residents, Holocaust survivors and members of the Vienna Jewish community, as well as the two Presidents.

At the event, President Rivlin said: “In this very place, Judenplatz, the Jewish community lived in Vienna until the ‘Viennese Decree’, exactly 600 years ago. Here in Vienna, Jewish culture flourished. Here, the Zionist movement was centered. And here was the centre of the Haskala, the Jewish Enlightenment, and Hebrew literature. 180,000 Jews lived here until the Anschluss. They played a key role in local and global culture. Only a few hundred had survived by the time the city was liberated by the Red Army. The Jewish community was almost completely destroyed. And burnt in the fire of the crematoria were respect for humanity, love of humanity, liberty, mutual responsibility and human solidarity.”

He added, “Austria did not wake up one morning to the swastikas of the Third Reich. Antisemitism, racism and xenophobia had been incubating for years. That is how the horrors were born – out of apathy and disregard,” recalling the Global Leaders’ Forum held last year at Beit HaNasi. “We gathered I Jerusalem, the capital of the State of Israel, leaders and heads of state from around the world to voice our shared responsibility and commitment as members of the family of nations, to pass on the facts and the historic lessons of the Holocaust to future generations. We pledged to remember, to take responsibility to wage a determined and uncompromising war on any expressions of antisemitism, racism and xenophobia and on the desecration of human dignity in any form, because ‘Beloved is man for he was created in God’s image’ (Avot 3:14).”

Rivlin touched on the current day pandemic and how there is hope for the future. “The global pandemic which has attacked us since then has only emphasized our shared commitment and the need for human solidarity, caring, compassion. I cannot deny the joint global effort to fight the virus has given me hope. Hope that we have, perhaps, learned a lesson about the overriding commitment to be there for one another in times of trouble.”

“In the spirit of that hope, and in the spirit of this remembrance, we stand here today in the Judenplatz in Vienna. The place from which tens of thousands of Jews left, never to return. May the memories of our brothers and sisters be forever engraved in the hearts of the entire world,” concluded the president.

President Van der Bellen of Austria said: “Our two countries share the experience of the Holocaust, where many people – too many people of my country – became criminals. Austria officially recognized its part in the Holocaust late, very late. Only at the beginning of the 1990s. For me, the fight against antisemitism and racism is very important. Nazi antisemitism and racism did not fall from the sky. They were here before, buried deeply in Austrian society. The Holocaust was the dreadful peak. Therefore, it our strong and commonly held desire, and even our duty, to oppose any resurgence of inhumanity, racism and antisemitism decisively and without compromise. Our aim today is to allow Jewish life without interference in any place – Israel, Europe, Vienna or any other place. It is the right of the Jewish people to live in any place I peace and safety.”

Earlier, the president held a working meeting with Austrian Chancellor Sebastian Kurtz. During the meeting, the president expressed his thanks for Austria’s commitment to fighting antisemitism with a new national strategy, and for its support for Israel regarding the International Criminal Court.

Rivlin was in Vienna as part of trip to Europe to meet with leaders from Austria and France. Earlier in the week he met with Austrian Chancellor Sebastian Kurz who has been a stalwart friend of Israel.

A working meeting with Austrian Chancellor @sebastiankurz.
I thanked him for his consistent support in the fight against antisemitism, and for Israel’s security and his work to promote Israeli-Austrian relations 🇮🇱🇦🇹

Rivlin also met with French President Emmanuel Macron on Thursday. During this time Rivlin took the opportunity to condemn the attempt of the International Criminal Court (ICC) to investigate Israel for alleged war crimes, despite the fact the ICC has no legal jurisdiction to enact such an investigation. The ICC also ignores real war crimes around the world.

At a press conference with Macron, Rivlin said. “Any attempt to pressure Israel through international bodies and the cynical political exploitation of international law is doomed to fail and will contribute nothing to improving relations between Israel and the Palestinians.”