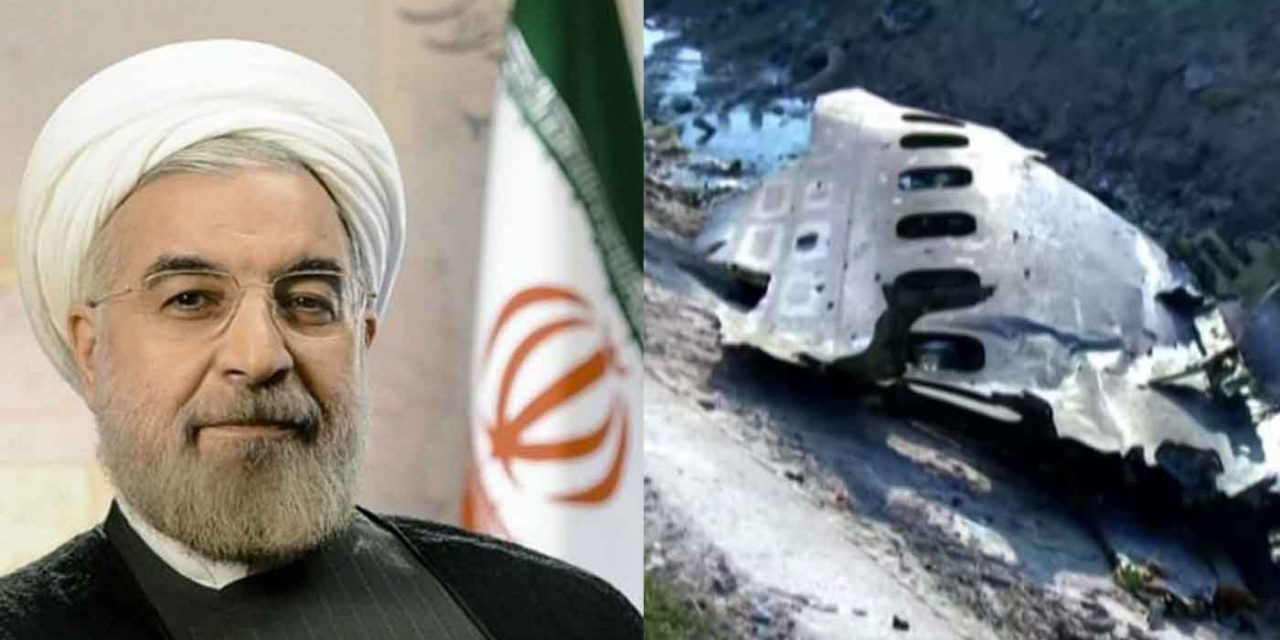 In the early hours of Wednesday morning, following Iran’s launch of 22 missiles at a US airbase in Iraq, a Ukrainian Boeing-737 carrying 176 people crashed in Iran shortly after taking off from Imam Khomeini airport in Tehran. All those on board were killed. The news came hours after the Iranian President sent a cryptic tweet threatening another Lockerbie, where 270 people were killed when a flight was blown up over British airspace.

Two days before the plane crashed, the President of Iran, Hassan Rouhani, posted the following tweet: “Those who refer to the number 52 should also remember the number 290. #IR655. Never threaten the Iranian nation.”

The number 290 is a reference to the number of passengers on board Iranian Airways flight IR655 who died when the US Navy accidentally shot down their plane over the Persian Gulf in summer 1988.

Five months later, 270 people died when Pan Am flight 103 crashed in Lockerbie after a bomb exploded on board. This was the deadliest terror attack to happen on British soil.

Robert Black QC, Professor Emeritus of Scots Law in the University of Edinburgh, said: “I think Rouhani’s tweet does refer to Pan Am 103 … The 290 clearly refers to those killed on Iran Air 655 and with ‘Never threaten the Iranian nation’ it seems to me that he’s saying that Iran responded to those Iranian deaths caused by US action.

“The only response that I can think of was the bombing of Pan Am 103 six months later.”

Libya and Gadaffi were long blamed for the Lockerbie attack, however, Gadaffi always claimed he had no knowledge of the attack and did not give the order. Instead, some experts have long thought Iran could be behind the attack.

This speculation was sparked once again in 2014 when Abolghasem Mesbahi, who once reported directly to former Iranian president Akbar Hashemi Rafsanjani, said to Al Jazeera, “Iran decided to retaliate as soon as possible. The decision was made by the whole system in Iran and confirmed by Ayatollah Khomeini.”

“The target of the Iranian decision-makers was to copy exactly what happened to the Iranian Airbus. Everything exactly the same, minimum 290 people dead,” he added.

Secret documents obtained separately also suggest that the bombers themselves belonged to the Popular Front for the Liberation of Palestine-General Command. And a similar conclusion was relayed to The Times of Israel in 2013 when a former senior member of the Israeli security establishment said he was certain the bombing was carried out by Ahmed Jibril’s PFLP-GC.

Therefore it seems strange that Lockerbie is mentioned by Iran’s President days after Iranian General Qasem Soleimani was killed by a US airstrike, an attack the Iranian regime has vowed to retaliate for and only days before a Ukrainian plane crashed in Iran.

At this time, there is no knowledge of what happened on board the Ukrainian flight until a thorough investigation has taken place. This is likely to take weeks, and if there was fowl play involved on behalf of the Iranians, it is likely it will be covered up as it took place in Iran and is under the control of the Iranian regime.

What we know so far is that the plane crashed in the moments after takeoff. Video of the crash shows the plane was on fire whilst it was still in the air. If there was a technical fault, the crew made no emergency calls or sent a distress signal. If the plane was shot out of the sky it would likely have disintegrated in mid-air, not been intact and on fire as it fell.

What happened to the Ukraine Airlines Flight from Iran?

There are already reports that Iran will not release the aircraft’s “black box” which records flight data, Boeing could find its path into the investigation blocked.

“Standard practice is for Boeing to get investigators on the ground to help with the work of domestic flight regulators but they have to be invited into the country – which is normally a formality,” said independent aerospace analyst Howard Wheeldon. “It’s hard to see how that will happen at the moment with the current climate.”

According to an aviation expert at the Telegraph, according to flight data the 737-800 climbed to 8,000ft before information from the jet was lost.

With the 737 able to fly on a single engine, the loss of one its two jets should not have been a problem. Even in the unlikely event of both engines failing simultaneously, the aircraft should have been able to glide for about 15 miles from its reported altitude.

If the flight had a technical issue, the crew would have had time (even with engine fires) to send a distress call. The BBC reported that Iranian media are quoting an Iranian aviation official who said no emergency had been declared.

A video showing a fiery object falling from the sky is said to be the Ukraine International Airlines and hints a serious and sudden catastrophe, if the video turns out to be genuine.

Ukraine International Airlines has suspended flights to Tehran indefinitely. The airline said that the Boeing 737-800 was built in 2016 and had its last scheduled maintenance on Monday. There was no sign of any problems with the plane before take-off and the airline’s president said it had an “excellent, reliable crew”. UIA has never had a fatal crash before, this was their first.

Mr Zelensky said Ukraine’s entire civil aviation fleet would be checked for airworthiness and criminal proceedings would be opened into the disaster. However, UIA isn’t grounding its other planes of the same model, instead, they appear to be viewing the location their plane was flying from as the problem.

A series of other airlines also announced on Wednesday that they were avoiding both Iranian and Iraqi airspace. Air France and KLM said they would use alternative routes while Lufthansa said it was also cancelling its daily flight to Tehran. Qantas, Air India, Japan Airlines, Singapore Airlines and Malaysia Airlines were among other airlines taking action.

This is not the usual response from airlines if they suspect it was a technical failure. Instead, they are avoiding the region.

Whilst this is pure speculation, the only information we have at the moment is the plane is said to have crashed without any distress signals being sent. Communication was lost with the plane at 8,0000 feet, long before it hit the ground. Video of the crash appears to show it was on fire before it crashed and the crash site shows the plane was not intact but reduced to very small pieces on the ground. The airline, including their experts, are not grounding other planes of this same type, which suggest they are not seeing it as a technical issue. In fact, airlines are reacting by stopping flights in that area and from that airport. Iran for its part is giving false information and refusing to release the black box. And this all happens to coincide with Iran’s President seemingly mentioning the Lockerbie plane bombing, a very specific incident, just hours before this tragic incident occurred.

Questions will have to be answered, which will hopefully be achieved with a full investigation.