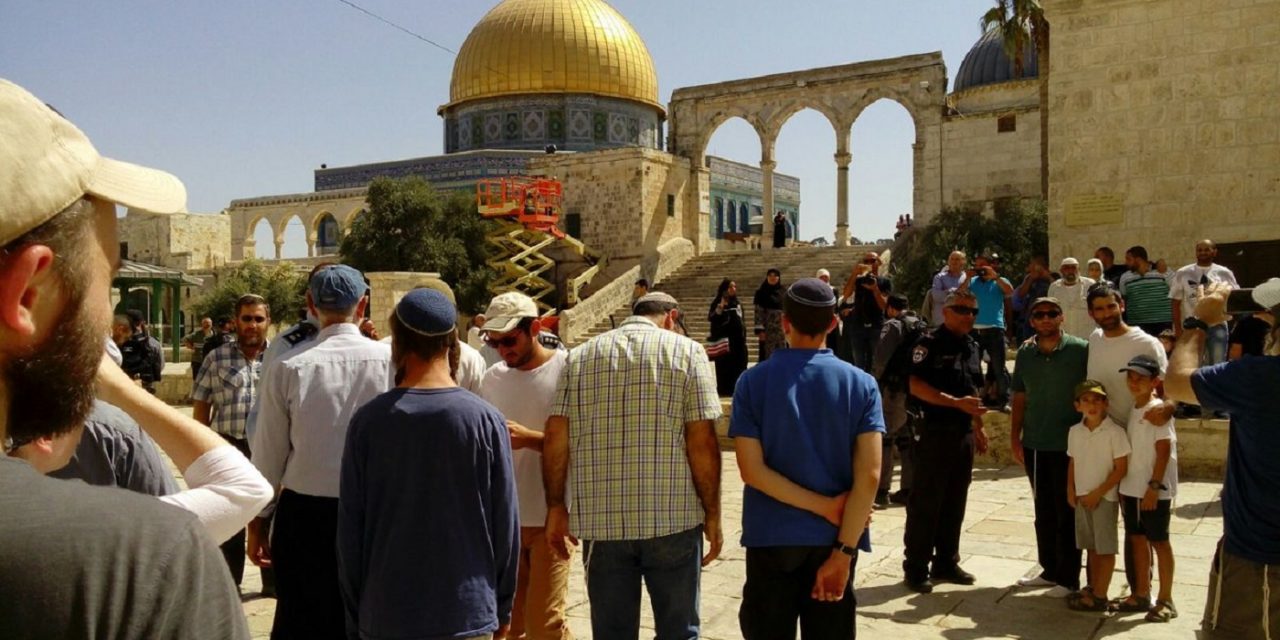 Unbelievable! Over 1,000 Jews so far have ascended the Temple Mount… This number is unprecedented! Times are changing,”noted activist Joshua Wander, one of the visitors to the Temple Mount

More than 1,200 Jews braved a searing heat wave Tuesday morning to visit the Temple Mount on Tisha b’Av, the saddest date on the Hebrew calendar, while thousands more sat on the floor – a traditional Jewish sign of mourning – at the Western Wall Plaza to commemorate the destruction of ancient Jerusalem by the Roman Empire in the year AD70.

The event, the largest visit by Jews to the Temple Mount in years, comes on the heels of weeks of tension surrounding the holy site that began on 14 July when three Palestinian terrorists murdered two Druze Israeli policemen at the compound, leading Israel to install metal detectors and security cameras for the Muslim worshippers. This was followed by massive Muslim protests outside the site and a 12-day standoff.

Entering the ramp leading to the Mount, Jewish visitors passed through metal detectors and thorough security checks to ensure no forbidden items, including prayer books, religious items and Israeli flags, made it up to the Mount. Officers briefed visitors on visitation rules, including prohibitions on praying and bowing down.

Jewish visitors were also required to leave identification at the checkpoint.

To accommodate the unprecedented number of Jewish visitors, police allowed large groups to enter the site, a practice they usually frowned upon, and eventually limited the visitors’ presence on the Mount to an abbreviated route.

One person, a 15-year-old boy, was lightly wounded when a Muslim threw a chair at him. He was given first aid by security officials and did not require further treatment. The man was not arrested.

In addition, six people were ejected for violating the rules and four people were arrested when a fight broke out adjacent to the Chain Gate between three Jews and an Arab man as the group left the Mount.

Throughout the morning, hundreds of people stood in line adjacent to the Mughrabi Gate, the only entrance to the Temple Mount for non-Muslims, to visit the site. There are 11 entrances for Muslims only.