Hero Israeli father shoots terrorist metres away from his home 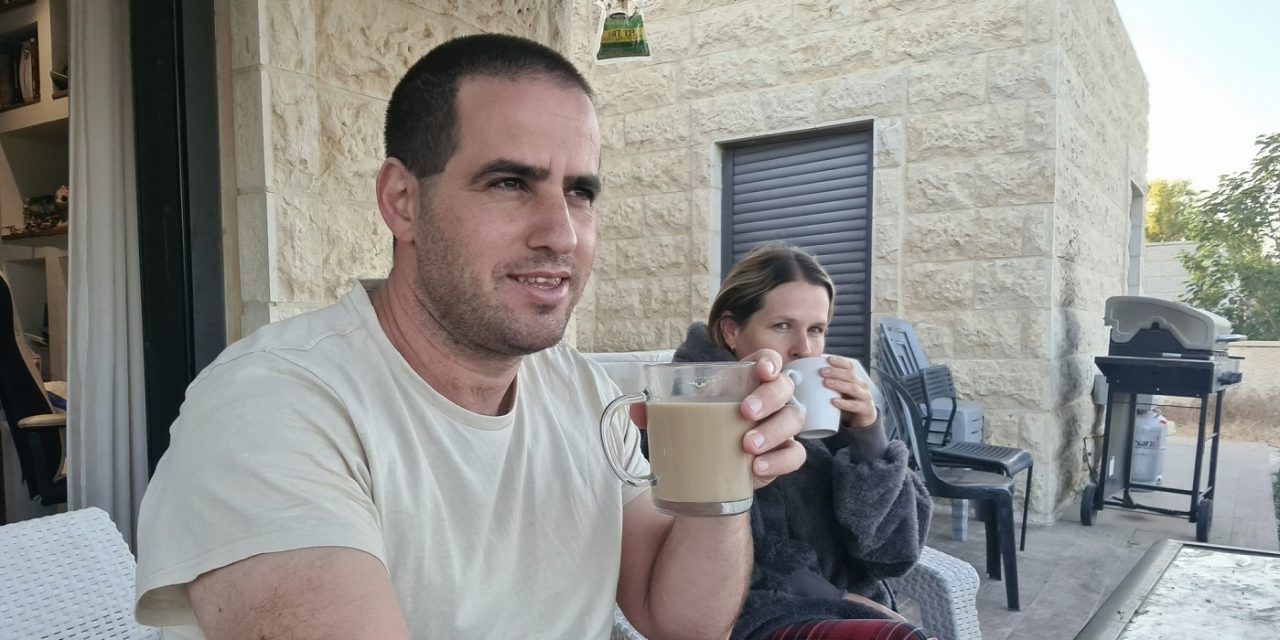 “Even a chubby high-tech worker becomes something else when he realizes someone is coming to murder his family.” – Yair Maimon

Yair Maimon, hailed as a hero this week in Israel, was sitting on his front patio drinking tea with his wife on Sunday evening when an armed Palestinian terrorist infiltrated the small Jewish community of Tekoa in Gush Etzion.

“We have seven kids, so this is our quiet time,” Yair said.

Suddenly they spotted a man with a knife scaling a security fence just metres away from their home.

“We were sitting on the porch, on the western side of Tekoa. Suddenly, within that serene landscape, we spot a face, a person climbing the fence right in front of us,” Maimon said in an interview with Radio 103FM Monday morning.

“That made us jump right out of our chairs,” he said. “I shouted toward him, ‘Stop, who is that?’ He mumbled something unclear and continued climbing. From that moment, we realized it was a terrorist attack.”

“There’s a lot of adrenaline, and you only have a second to decide what to do,” he said. Yair ran to grab his M-16, which he possessed as a civilian member of the community’s security team, rushed his family inside and told his wife to call the local security patrol.

“I ran inside to grab my weapon, I cocked it and continued toward the door, when I realized I had to alert security forces that there’s a terrorist here, but I couldn’t do that, so I asked Merav to make the call,” he said.

When he made it outside, Maimon realized that the terrorist had managed to outflank him. Turning around, he encountered the terrorist waving his knife toward him and shot him at point-blank range, right outside his home.

“Even a chubby high-tech worker,” he said, referring to himself, “becomes something else when he realizes that someone is coming to murder his family.”

Maimon’s 13-year-old daughter filmed part of the incident, despite her father repeatedly telling her to move back.

In the video, Maimon can be seen approaching the dead terrorist, who is laying in his front yard, while continuing to aim an M-16 rifle at his body.

The incident came shortly after a Palestinian man who had illegally entered Israel stabbed a police officer in the neck at Jerusalem’s Damascus Gate.

On Monday, Maimon uploaded a picture to his Facebook page of his wife and himself sipping coffee on their porch with the caption “Waiting for the next terrorist,” alongside a winking emoji.

Interior Minister Ayelet Shaked called Maimon a hero who acted “exactly as expected” in such a scenario.

“Well done to a Tekoa resident, a hero, who prevented a terrible disaster, protected his family, and took action in order to end this incident exactly as expected — by eliminating the terrorist. I call on anyone who is able to carry a weapon to do so, in order to strengthen our security forces. Together we will win,” she said.