Germany’s commissioner on anti-Semitism sparked uproar when he said in an interview that he could not “advise Jews to wear the kippa everywhere all the time in Germany.”

Israeli President Reuven Rivlin voiced shock at Felix Klein’s warning and said it was a “capitulation to anti-Semitism” and evidence that Jews are unsafe in Germany.

“The state must see to it that the free exercise of religion is possible for all… and that anyone can go anywhere in our country in full security wearing a kippa,” Steffen Seibert told a press conference.

The statement sets a challenge for Germany’s police force, as the annual Al-Quds (Jerusalem) rally is taking place in Berlin on Saturday. The anti-Israel hatefest was attended by a higher-than-usual 1,600 people last year calling for Israel’s demise.

The Jewish community is planning a counter-demonstration. They should bring their skullcaps, Klein said.

“I call on all citizens of Berlin and across Germany to wear the kippa next Saturday if there are new, intolerable attacks targeting Israel and Jews on the occasion of al-Quds day in Berlin,” he said.

Bild, Germany’s top-selling daily newspaper, called on readers to “stand in solidarity with (their) Jewish neighbours” by making “their own kippa”, bearing the star of David, to “raise the flag against anti-Semitism”.

The paper’s editor-in-chief, Julian Reichelt, wrote that if Jews couldn’t wear a skullcap, “we have failed in the face of our history.”

“If even one person in our country cannot wear the kippa without putting themselves in danger, then the only answer must be that we all wear the kippa,” he added. “The kippa belongs to Germany!” 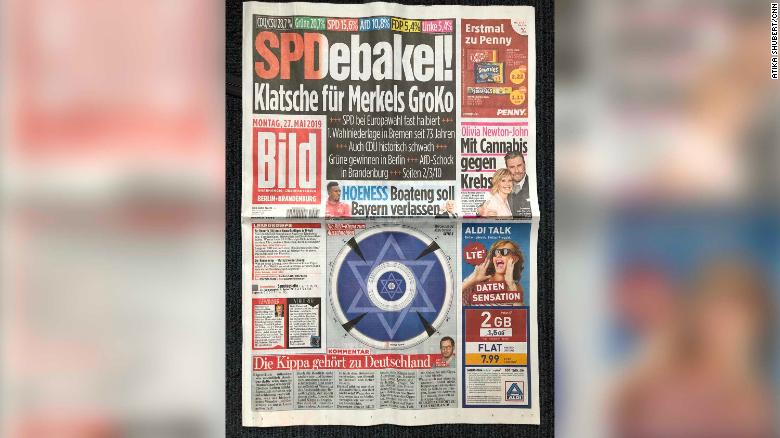 There has been a noticeable rise in anti-Semitic offenses in Germany, with violent attacks up over 60 percent in 2018 according to the country’s police statistics. More than 1,600 anti-Jewish incidents were recorded, with 62 physical attacks leaving 43 people injured.

Merkel has also deplored “another form of anti-Semitism” stemming from a major asylum-seeker influx, with many coming from Muslim countries like Syria, Afghanistan or Iraq.

The Central Council of Jews in Germany has already issued several warnings about wearing the kippa in public.

In one prominent case last year, a 19-year-old Syrian man was convicted for assault after lashing out with his belt at an Israeli man wearing a Jewish skullcap while shouting “yahudi”, Jew in Arabic.