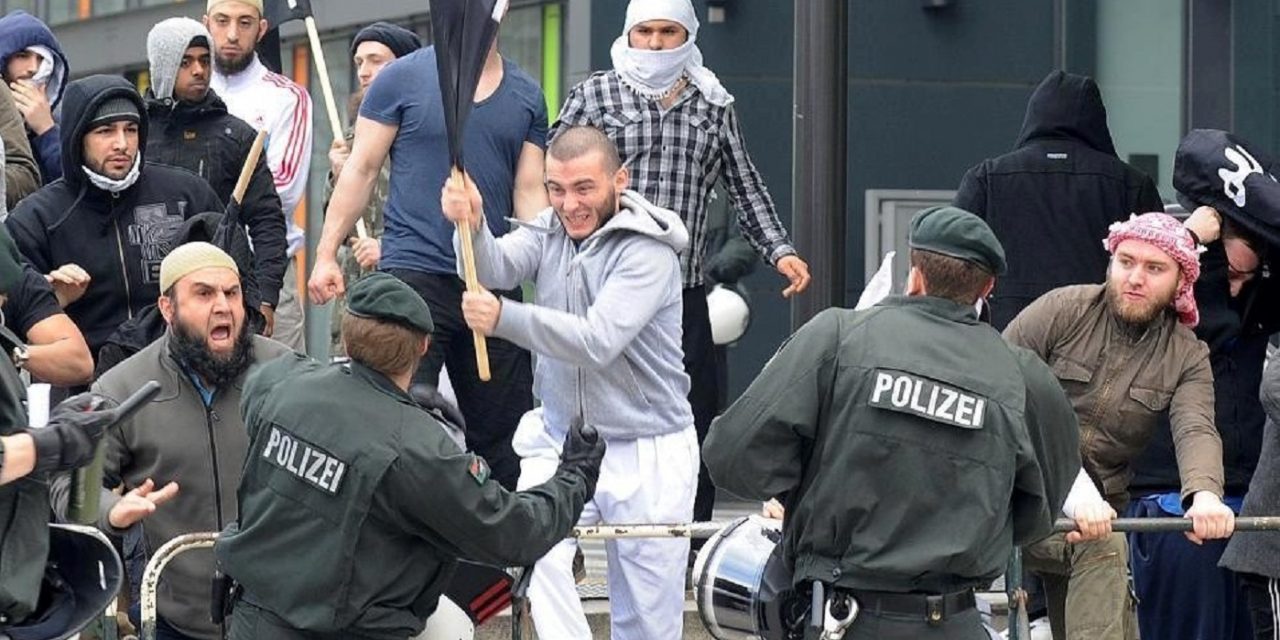 Germany’s domestic intelligence agency, or BfV, has reported a significant rise in the number of Islamist extremists living in the country. Officially classified as Salafists, or radicalized Sunni Muslims, their numbers have reached a new all-time high according to the agency’s annual report issued on Tuesday.

The number of Islamists in the country has doubled in the past five years, crossing 10,800 individuals. This significant growth in the Islamist scene can be attributed to more than a million Arab and Muslim migrants taken in by the country since Chancellor Angela Merkel opened borders in the autumn of 2015.

According to the report, intelligence agencies are finding it increasingly hard to monitor and infiltrate Islamic groups as they increasingly revert to closed private circles and internet.

The 359-page intelligence report reviewed by Legal Insurrection links mass migration to Islamic terrorism and violent antisemitism, describing the trend as a “serious challenge to the free and tolerant coexistence” in Germany.

The number of Salafists in Germany has once again risen by 1000 persons in 2017, taking their total to 10,800; thus making Salafists the strongest Islamist group in terms of manpower. (…)

The basic acceptance of violence is an intrinsic part of the Salafist ideology. The recent analysis of terror attack in German and Europe shows that a Salafist radicalization often leads to acts of jihad. (…)

Antisemitism is a fundamental component of this ideology across the Islamist spectrum. Religious, territorial or national-political motives blend together in an antisemitic worldview that basically projects a “worldwide Jewish conspiracy. The Jews are seen as the masterminds of a global plot and collectively blamed for various ills and grievances. (…)

Antisemitic incidents linked to Islamism reviewed by the BfV point towards the fact that antisemitism incited by Islamist organizations pose a serious challenge to the free and tolerant coexistence in Germany. This is especially valid in the case of numerous migrants who have entered Germany.  [Verfassungsschutz­bericht2017; emphasis added; translation by the author]

The German intelligence report also showed an increase in left-wing violence. Leftist extremists committed 1648 violent crimes in 2017, a year-on-year rise of 37 percent. A majority of these violent acts were directed at the police–a total of 1135 incidents including bodily harm, arson, and terrorism.

During the same period the right-wing violence went down by 35 percent, with 1054 reported acts of violence compared to 1600 in the previous year.

The official figures on right-wing crimes must, however, be treated with caution. There have been reports in the past that German authorities have been registering Islamist crimes as right-wing ones. According to a September 2017 report published in the Jerusalem Post, German Interior Ministry has been classifying antisemitic crimes committed by Islamic groups, such as the terrorist-outfit Hezbollah, as ‘far-right’ violence.

Germany is home to 950 members of the Iran-backed Hezbollah terrorist militia, as well as 320 belonging to Hamas, a Muslim Brotherhood-linked Palestinian terrorist group.

The intelligence report did not specify the number of ISIS or Al Qaeda members in the country, citing unavailability of reliable data. But in its newsletter issued earlier this week, the agency raised serious concerns over the return of large numbers of women and children belonging to ISIS fighters of German origin to the country. Merkel government had negotiated a deal with the Iraqi government and Kurdish authorities to bring back ISIS family members on account of ‘humanitarian considerations’ and ‘Germany’s duty to protect its citizens.’ This policy will result in “growing number of radicalised minors in the coming years,’ the newsletter of the German domestic spy agency predicted.

The German intelligence report also warned that these children are “educated from birth with an extremist world view that legitimises violence against others and degrades those who aren’t part of their group.”

The radicalisation of youngsters is happening faster and earlier, according to Hans-Georg Maassen, the head of Germany’s BfV.

Frank Jansen, a journalist with Berlin’s centrist paper Der Tagesspiegel, and an expert on extremism in Germany, notes that most of the Salafist minors in the BfV report are younger than eight-years-old. According to Jansen, the report calls these children ticking time bombs.

Salafism’s growing infiltration of the Berlin public schools also corresponds with an increase in anti-Semitism in the classrooms, according to an August 2017 study by the American Jewish Committee Office in Berlin.

Anti-Semitism is an essential element in the ideology of the entire Islamist spectrum, according to the BfV report. This propaganda uses age-old stereotypes and prejudices, prevalent from medieval times through the Nazi era.

Conservative members of the German parliament have reacted to the Salafist threat with a call for police monitoring of Muslim children under age 14, the lowest age currently permitted in most German states. Civil rights organisations, however, have voiced strong objections to such surveillance. Humanist Union, a civil rights group, says it is unreasonable to consider children a threat because their ideas and opinions are not fully developed and are subject to change.

“This is not about criminalising people under the age of 14,” counters Patrick Sensburg, a member of Chancellor Angela Merkel’s Christian Democratic Union, “But about warding off significant threats to our country.”