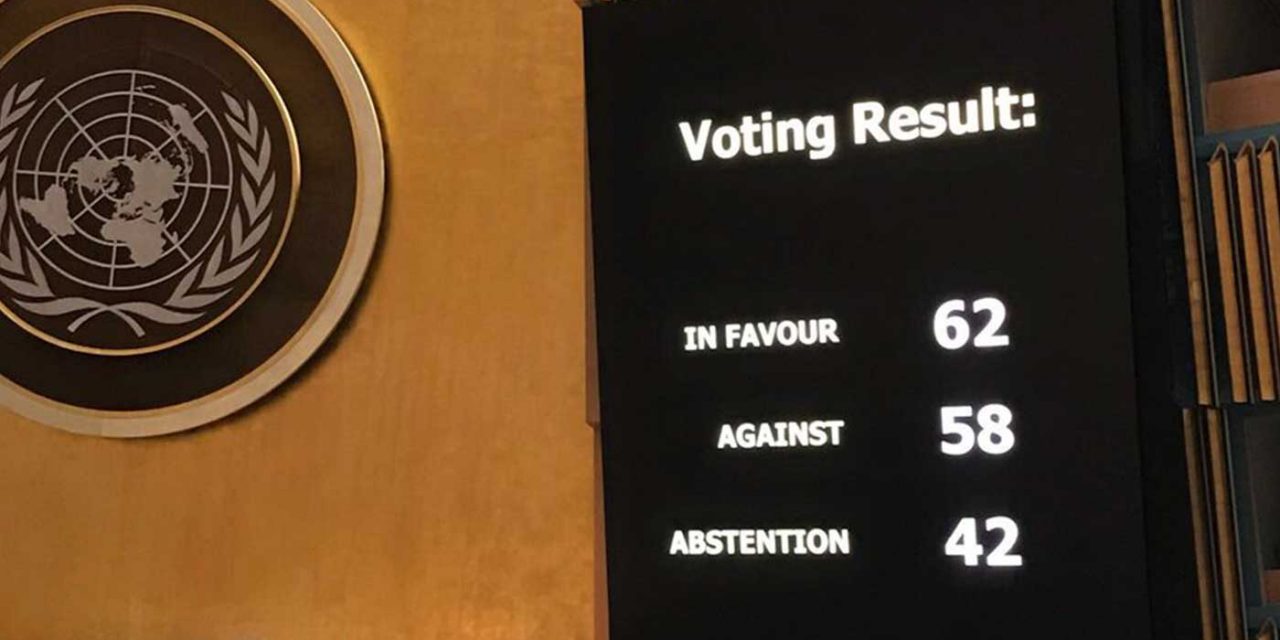 For the first time in United Nations General Assembly history, a majority of nations voted to condemn the Islamic terror group Hamas. Shamefully, the head of the General Assembly refused to pass the motion using “procedural manoeuvres”.

The vote happened when US Ambassador Nikki Haley put forward an amendment that condemned Hamas’s violence at Israel’s border. Haley’s amendment cleared with a slim majority, 62 to 58, with 42 abstentions.

However, General Assembly President Miroslav Lajčák, of Slovakia, ruled that a two-thirds majority was needed for an amendment to be added to a draft resolution.

Haley appealed his decision, stating a rule that said only a slim majority (which this had) was needed. This led to the session being adjourned for several minutes.

When the session reconvened, Lajčák put Haley’s appeal to a vote. Sixty-six countries voted in favour, 72 opposed and 26 countries abstained, which meant that the original draft was put to a vote without the condemnation of Hamas.

The Assembly passed the unamended resolution with 120 votes in favour and 8 votes against, with the UK abstaining. This resolution condemned Israel for the Gaza border violence and failed to even mention Hamas.

Haley condemned it as a “morally bankrupt judgement.

Ambassador Pierce puts on record the UK's disagreement with the head of the UNGA for not adopting the amendment that condemned Hamas but noted the significance of the majority voting for it.Whilst the UK Abstained from the main anti-Israel vote at the UN General Assembly, we did vote in favour of the motion that condemned Hamas.#CUFI #PrayforIsrael

Posted by Christians United for Israel – UK on Friday, 15 June 2018

UK Ambassador Karen Pierce stood with the US and Israel saying, “I want to put on record that we did not agree with the procedural decision partly because of rule 85, partly because of past practice, but I also want to put on record that a majority of member states at the General Assembly voted for an amendment condemning Hamas activity. That’s an important precedent for the future.”

Israel’s Ambassador Danny Danon tweeted, “While procedural manoeuvres were used to block it, We’re proud that by working with the Americans and our friends around the world, a majority of nations in the UN voted for the first time to condemn the terrorists of Hamas.”

While procedural maneuvers were used to block it, We’re proud that by working with the Americans and our friends around the world, a majority of nations in the @UN voted for the first time to condemn the terrorists of Hamas. pic.twitter.com/coyzqWPq1P

Some are claiming this to be a “silver lining” on a bad day for Israel at the United Nations. And it seems that there is at least some shift towards those condemning Hamas. Unfortunately, the United Nations is still far away from any moral clarity on the issue of the Israel-Palestinian conflict.

At CUFI UK we are saddened by the UK abstaining from this vote. We strongly feel the UK should be aligning itself with Israel and voting with a resounding “No” to the anti-Israel resolutions. Fortunately, they did vote “Yes” to condemn Hamas and they even went “on record” to show their disagreement with it not passing. This appears to be a shift from the previous Ambassador, but there is some distance to go until the UK is fully aligned with Israel in these matters.