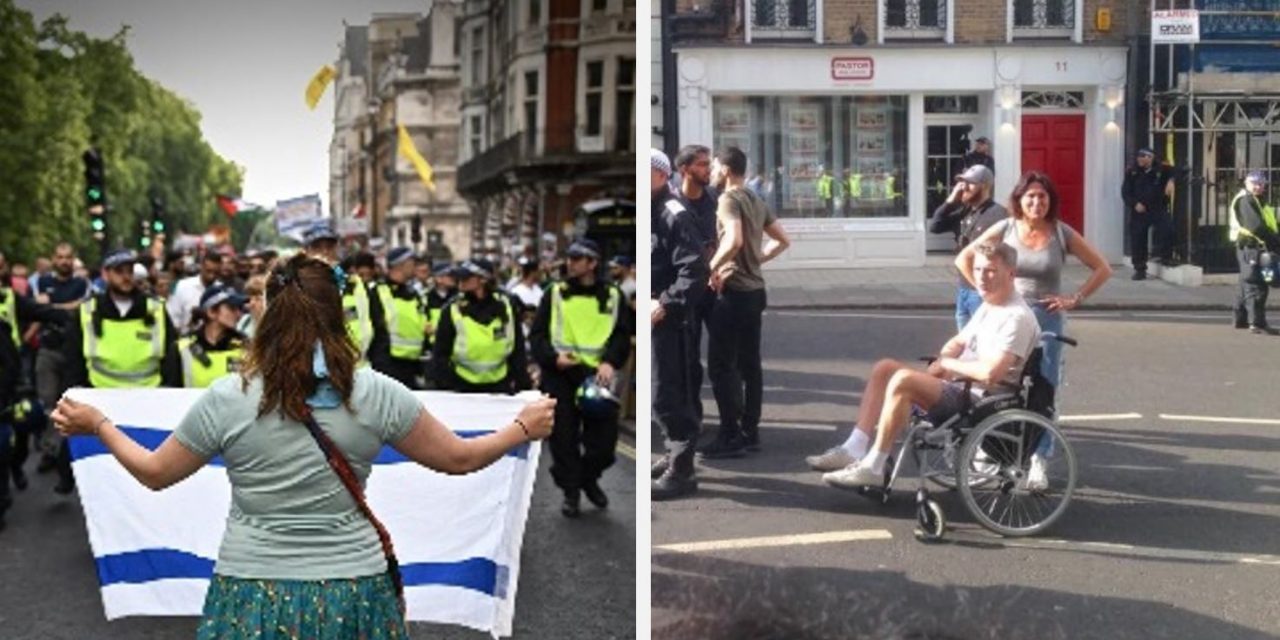 The photos above are from the counter-demo to the anti-Israel Al Quds Day rally last Sunday. They epitomise what courage looks like in the face of evil.

In the first photo, a woman bravely holds an Israel flag in the path of the pro-Hezbollah, Al Quds Day march, an event intended to call for the destruction of Israel, which was repeated on Sunday along with the flying of the terrorist group, Hezbollah’s flag. This lady was not content in allowing it to pass without declaring her support for Israel.

In the second picture, a man in his wheelchair prevents the Al Quds parade. Not only did he block the terror march with his presence, causing a significant delay, but when police asked him to move they didn’t realise that the man they were dealing with was a top lawyer, Mark Lewis. Mark, who suffers from Multiple Sclerosis, and who you may recognise from some high profile legal cases you have seen in the news, refused to be removed. He said,

“These people were supporting terrorists. We had to object and not give them a free pass. These are our streets. The Government were allowing them a free rein, we had to stop them. I thought I’d challenge the Police to see if they had a legal basis to stop me exercising my freedom to protest. They said they had an order blocking the street. I asked to see it. They looked flummoxed.”

He also said, “Amazingly, a little knowledge of criminal law and the rights of protesters baffled officer after officer who challenged me,” but also pointed out that police saw his wheelchair as a greater threat than a machine gun that was on the parading flags.

This lady and gentleman showed real bravery to put themselves in the line of the anti-Israel protesters. Whilst not all of us may be in a position to do the same, they symbolise the action that we all take when confronting the hatred for Israel and other forms of anti-Semitism. By standing with Israel, we are placing ourselves in the line of the enemy, yet we do not stand alone. The Lord is our defender. The courage we need, whether it is confronting evil of those that wish to destroy Israel, or indeed facing any other issue in our lives that cause us fear or anxiety, is found when we lean upon the Lord and trust Him. He is our rock and fortress as well as our shepherd and comforter. In the words of the Lord given to Joshua, “Be strong and of good courage, do not fear nor be afraid of them; for the Lord your God, He is the One who goes with you. He will not leave you nor forsake you.”

Let us draw upon the provision of the Lord today in facing the challenges that may be before us in our lives. Ask for Him for courage to help you face the problems you may be encountering, and ask the Lord to give you courage address issues that you may until now have been too fearful to face. The Lord is with you. He goes with you and will not forsake you.

And when it comes to defending Israel, the Lord sees your courage also. By committing to praying for Israel, you have chosen to place yourselves among those that are standing in the gap for Israel.

“He will not allow your foot to be moved;
He who keeps you will not slumber.
Behold, He who keeps Israel
Shall neither slumber nor sleep.”

We often quote verse 4 in relation to Israel, but we must not overlook verse 3. If the Lord has forsaken Israel then he has also forsaken you. If the Lord is unable to keep His promise to Israel, then He is unfaithful to keep His promise to you also. BUT, the Lord DOES keep Israel – proof that He also keeps you. He HASN’T forsaken Israel – comfort that He also hasn’t forsaken you. He refuses to slumber over Israel and He hasn’t slumbered over you.

Praise the Lord that He is faithful.