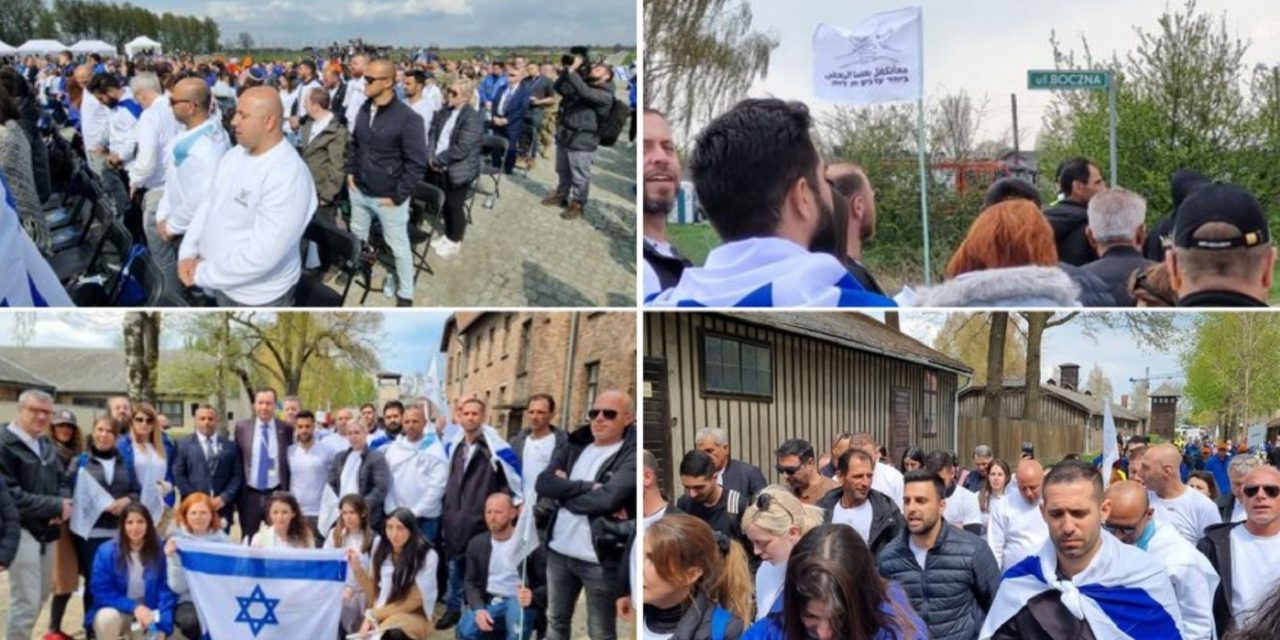 The first ever delegation of Israeli Arabs were among thousands who attended the March of the Living commemoration at Auschwitz this week.

Just across the border from war-torn Ukraine, Ukrainian refugees were also among 2,500 people from 25 countries for the annual march, which was the first since its suspension due to Covid. The event commemorates Israel’s Holocaust Remembrance Day and is known for bringing young people from around the world to study the history of the Holocaust.

The event on Thursday culminated in the traditional two-mile march between the Auschwitz and Auschwitz-Birkenau camps near Krakow in memory of the victims of the Holocaust.

The delegation of about two dozen participants, which included Arab Israeli Muslims, Christians and Druze, was organized by the non-profit organization “B’Yachad,” meaning “together.”

At Auschwitz, the group met with Holocaust survivors, one of whom told its members, “You give me hope.”

Time to sum up our special journey to Poland – Muslims Druze Christians and Jews singing together “ Salam-Peace “ after an intense emotive week@Vouch4Eachother pic.twitter.com/qGaWEnb15a

“We are Israelis in every way, and are supposed to live like Israelis,” said Mahmud Abu Ria, one of the group’s participants.

“I grew up with Jews and heard stories from my friends from all over the world, that there was persecution, they wanted to murder them and destroy them,” his brother, Amir, told the Kan public broadcaster.

“When they see some Arab group that wants to hurt them or a terror organization that wants to destroy and murder Jews, just because they are Jews, there is fear,” he said. “There are flashbacks to what their grandparents said.”

“I want to understand the pain of the Jews that I work with and live with every day. I need to understand their pain and what lies behind it,” he added. “I can’t live in the country without getting to know the other side.”

“You give me hope” – this is what Mala Tribich the holocaust survivor just said.
I was personally moved by her message to the next generation of this country. 🇮🇱#NeverAgain pic.twitter.com/zb428jmpH1

The brothers are from the town of Sakhnin in northern Israel and said their grandfather fought alongside Jews before the establishment of Israel in 1948. They said they came from a military family and their brother was currently serving in the IDF.

During the march, the group was accompanied by Knesset MK Abir Kara.

Before the trip, the group made a preparatory visit to Yad Vashem, Israel’s national Holocaust memorial and museum. After arriving in Poland, participants visited the old Jewish quarter of Krakow and Oskar Schindler’s factory.

As an Arab Israeli organization, we were honoured to meet with Holocaust survivor Ed Mossburg today and share with him our commitment to carrying on his legacy through Israeli society as well as the Arab world. pic.twitter.com/RkWMShaxZL

Ukrainian refugees also attended. Lila Buzeniuk, a mother of three and Ukrainian refugee from Vinnitsa said, “The war divided our family and forced us to leave our home and our country. But we survived and we are alive.

“We found shelter and refuge in a sister country,” she said of Poland. “Thanks to wonderful people we will live, we will remember — and never forget.”

Duda, walking as Holocaust survivor Edward Mosberg held him by the arm, took part in a wreath-laying ceremony at the Death Wall in Auschwitz, where prisoners were shot to death.

Later, during a ceremony at Birkenau, Duda spoke out against war, antisemitism and other forms of hatred, and paid tribute to Jewish victims of the Holocaust as well as the other victims of Nazi Germany, including Poles, Roma and Russians.

“We come here to show that while during World War II, Nazi Germany managed to wipe my country off the map, wipe it out and murder Poles, including Polish Jews, we will never again allow something like this to happen,” he said.

“We are also here to show that there is absolutely no consent to the attempt to take freedom and kill the Ukrainian nation with impunity, as is happening today in the occupied territories of Ukraine,” he said.

Also for the first time this year, the march included an official delegation from the United Arab Emirates and a ceremony in Arabic. Delegates also came from Syria and Lebanon, Saudi Arabia, Jordan, Egypt, Morocco, Turkey, and East Jerusalem, says Times of Israel.

A group of Muslim influencers also participated, part of a group called Shakara that aims to strengthen the bond between Israel and the Arab world following the Abraham Accords.