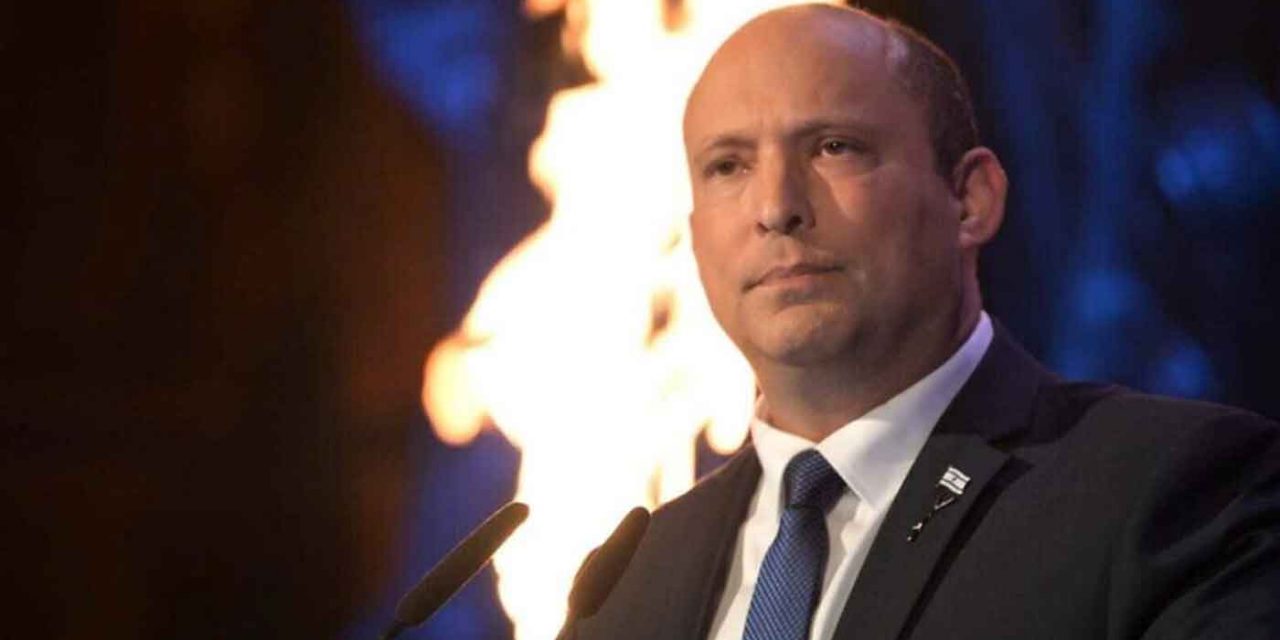 Speaking during a Holocaust Martyrs’ and Heroes’ Remembrance Day opening event at Yad Vashem in Jerusalem, the prime minister said: “The Holocaust is an unprecedented event in human history. I take the trouble to say this because as the years go by, there is more and more discourse in the world that compares other difficult events to the Holocaust. But no.

“Unfortunately, history is full of cruel wars, brutal murders and also genocide. But it is usually a means designed to achieve a goal, some sort of expectation—military, political, economic, religious. The case of the extermination of the Jews is different.”

He continued: “Never, in any place or during any time, has one people acted to destroy another in such a planned, systematic and indifferent way, from a place of absolute ideology and not out of utilitarianism. The Nazis did not kill Jews to take their jobs or their homes. The Nazis sought to hunt all Jews and exterminate every last one of them.”

Bennett explained, “The memory of the Holocaust is not just a memory but a layer, part of the DNA that is passed down from generation to generation.”

The Prime Minister also explained how during the Holocaust there were separate Jewish resistance movements trying to fight the Nazis that were divided by political lines. but he explained today the whole of Israel fights together.

“Today, thank G-d, in the State of Israel, we have one army, one government, one Knesset and one nation—the people of Israel. When we are united, no external enemy can beat us,” stated Bennett.

There were a number of Israeli political figures in attendance at the event. Importantly, the head of Germany’s parliament, Barbel Bas, was among the officials in attendance.

Knesset Speaker Mickey Levy called Bas’s participation in the Israeli parliament’s ceremonies for Holocaust Remembrance Day “a significant and important expression of the special connection that exists between the countries, for the historical responsibility that Germany took for the war crimes, and Germany’s commitment to Israel’s security.”

Bas had a chance to speak where he shared his sorrow for the past.

“I bow my head with humility and shame in face of the Holocaust victims,” said Bas.

“It is forbidden for us to forget and we will not forget,” she said. “From our historical guilt stems a commitment. It is upon us to fight resolutely against antisemitism in all of its forms, and it is upon us to preserve the [victims’] memory, and to pass on their memory to the younger generations.”

There were also a number of other events in memory of the Holocaust. Defense Minister Benny Gantz participated on Thursday in a memorial ceremony at the Massuah Museum in Kibbutz Tel Yitzhak.

“In Holocaust Remembrance Day speeches, we occasionally mention Israel’s security threats, led by Iran — which seeks to acquire nuclear weapons and pose an existential threat to us,” Gantz said. “Therefore, the State of Israel must have military power and it must have moral power alongside it. We must be strong and know how to defend ourselves on our own. This is an important lesson of the Jewish people for generations and we must be moral so that we have something to live for.”

“Preserving human morality and humane values are some of the key lessons of the Holocaust,” he added. “These… stem from our ability to live as one strong and cohesive society, not as a people scattered in Diaspora.”