There has long been evidence of anti-Semitism and incitement within Palestinian textbooks, even those funded by the UN and European countries. In an attempt to clamp down on this and to ensure that UK and EU taxpayer money was not being spent on incitement, an external investigation of Palestinian school textbooks is currently taking place, funded by the UK and EU.

Israeli watchdog IMPACT-se is closely following the review of these textbooks which is being carried out by German-based Georg Eckert Institute. The George Eckert Institute, however, is said to be reviewing the textbooks used in Arab schools inside of Israel, not those used within the Palestinian territories.

According to the Times of Israel, to date there have been two reports carried out by the same teams at the Georg Eckert Institute: an “inception” report, paid for by the UK, and an “interim” report, which has been paid for by the EU.

The UK’s DfID declined to divulge how much the UK contributed towards the first “inception” report. The European Union paid €217,833 for the second “interim” report.

An initial 177-page summary of the interim report — since removed from the Georg Eckert website — shows identical research to the first inception report, as well as identical staffers, headed by Aurelia Streit.

Streit is a former intern at the House of Commons for the Labour MP Afzal Khan, a member of Labour Friends of Palestine.

IMPACT-se has published differences within the textbooks which shows that those used inside Israel (which are the ones being reviewed) do in fact use images and wording promotes coexistence, however, those used within Palestinian territories appear to do the opposite. As shown in this example: 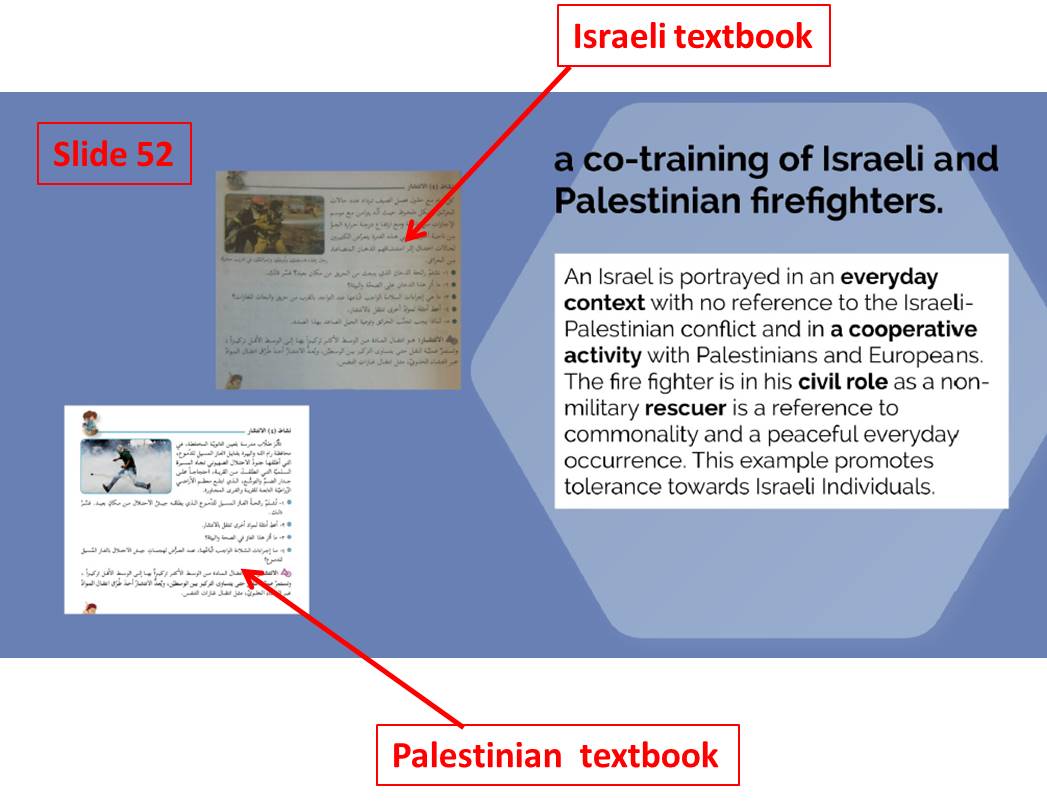 British politicians have raised concerns about this situation with House of Lords members Eric Pickles and Stuart Polak, together with Conservative MP Stephen Crabb saying that information about the Georg Eckert research “raises fundamental questions about the whole inquiry,” which “seems likely to fall far short of the standard the UK government and Parliament can reasonably have expected.”

In a letter to Foreign Secretary Domonic Raab, who will oversee the handling of these claims, the politicians explained there are “troubling examples of incitement to violence and antisemitism [which] appear to have inexplicably been entirely overlooked.”

“Members in both Houses of Parliament have expressed concerns about the content of teaching material supplied by the Palestinian Authority for use in schools. [There is] a curriculum that glorifies violence and encourages discord,” they told Raab.

In addition to the funding of the reports, the UK also provides tens-of-millions of pounds to education within the Palestinian territories.

Last year, DfID gave GBP 20 million ($26.2 million) to fund Palestinian teachers’ salaries and an additional GBP 65.5 million ($86 million) to the UN Relief and Works Agency (UNRWA), which supports the education of 500,000 Palestinian refugees across the Middle East, including over 320,000 children in the West Bank and Gaza Strip using the official Palestinian Authority curriculum.

Marcus Sheff, CEO of IMPACT-se calls the whole chain of events a “comedy of errors” that are “really regrettable.”

“The European Union and the UK had the opportunity to add to our collective understanding of these extreme textbooks and to fulfill their duty of care to Palestinian students,” Sheff said.

“Instead, the review has been a comedy of errors from start to finish. The researchers have reviewed the wrong textbooks, taking textbooks for Israel’s Arab schools in Jerusalem, earnestly praising them and presenting them as coming from the Palestinian Authority’s curriculum.

“The researchers’ introduction contains embarrassing mistranslations of basic Arabic, a lack of familiarity with Palestinian culture and, bizarrely, the citing of non-existent research. This is not a particularly complex project. It is hard to fathom how it went so wrong.

Adding insult to injury, he said, the report has been “plagued” by delay.

“The British government clearly wants it made public as soon as possible, but the EU has declared it is staying under wraps. Frankly, given the debacle this research project has become, one can understand why,” Sheff said.

Asked by The Times of Israel about the alleged errors in the forthcoming report, the German Georg Eckert Institute had no comment on IMPACT-se’s claims and issued a statement that “the study of approximately 150 textbooks, published by the Ministry of Education under the Palestinian Authority since 2017, will be finished and made available in October 2020, according to the agreement between the EU and the Georg Eckert Institute.”

We will be eagerly awaiting the outcome of the report and our government’s response to it.