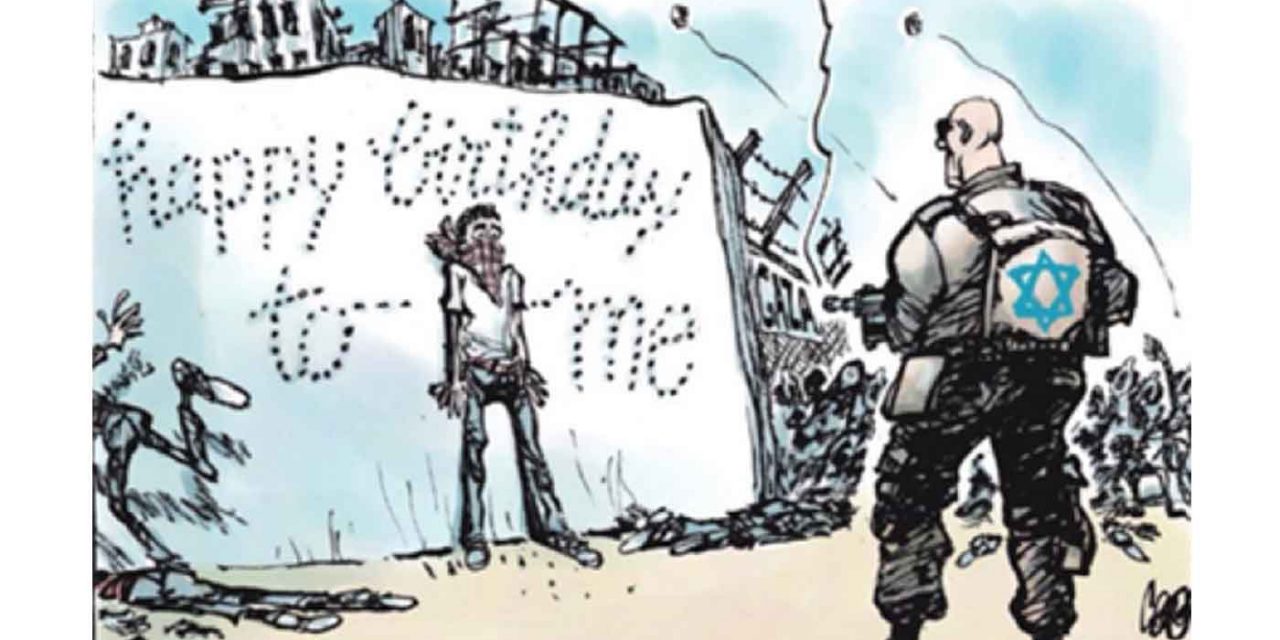 A newspaper in the Netherlands has been criticised after it published an anti-Semitic cartoon depicting an Israeli soldier shooting masses of Palestinians on the Gaza border in celebration of the Jewish state’s 70th Independence Day last week.

The cartoon, published in Volkskrant, a major Dutch paper, depicts an IDF soldier wearing sunglasses and adorned with a Star of David on his back. Having put a frightened-looking unarmed Palestinian against a wall, he fires a barrage of bullets to spell out “Happy birthday to me” — passing across the Palestinian’s chest along the way, the Times of Israel reported.

Bodies of what seems to be other protesters lie nearby, next to what could be seen as a pile of bodies of slaughtered demonstrators who participated in the weekly “March of Return” mass rallies organized by Hamas, the terror group which runs the Gaza Strip.

The Simon Wiesenthal Center denounced a political cartoon in Volkskrant, a major Dutch newspaper, for depicting Israel as a murderous bully celebrating its 70th birthday by gunning down defenseless Palestinians at the Gaza border.

“For the last month, Hamas has deployed the people of Gaza, including terrorists, at the Israeli border in what it labeled as peaceful protests but in reality, they included firebombs, kites affixed with explosives,” said Rabbi Abraham Cooper, the Simon Wiesenthal Center Associate Dean and Director of Global Social Action.

“Instead of condemning Hamas for its pernicious and cynical abuse of civilians, the cartoon demonizes the Jewish state and her soldiers as blood- thirsty murderers celebrating Israel’s 70th birthday,” he continued

“The outrageous imagery deployed in this cartoon will only further encourage Hamas to continue its terrorist and criminal actions, while validating anti-Semitism in Holland and beyond by associating the Jewish Star of David with the killing of innocents,” Rabbi Cooper concluded.