Don’t be deceived by anti-Israel narratives in the media 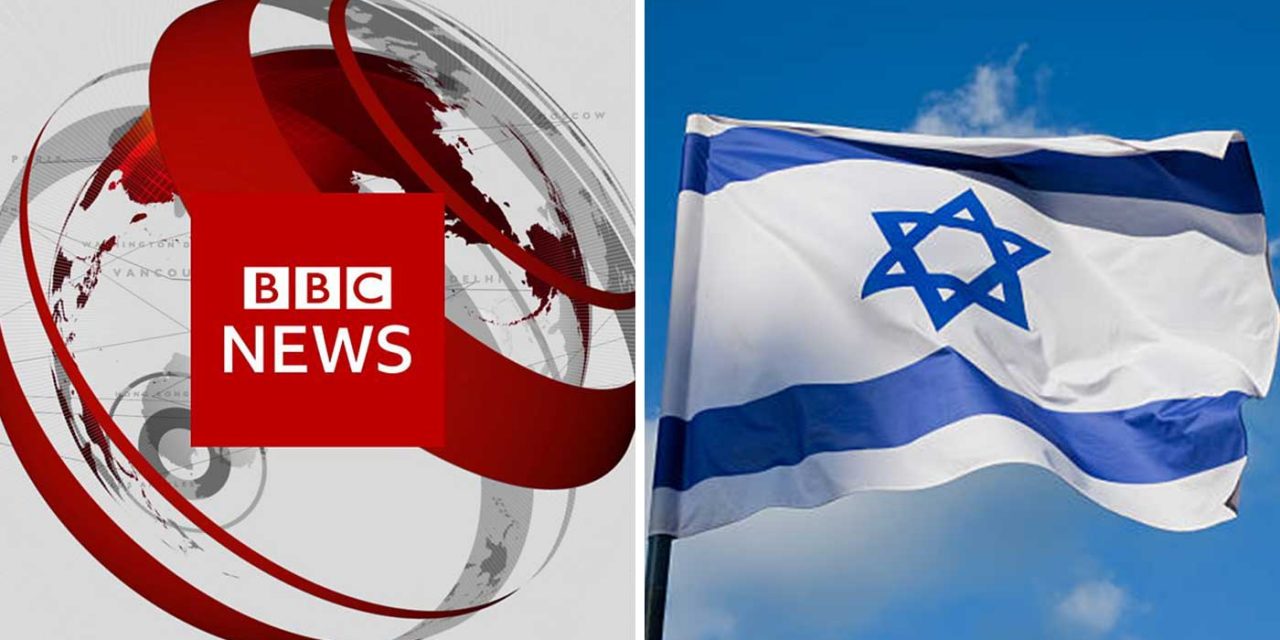 These last couple of weeks have been eye-opening in the way Israel was treated by some media outlets. Particularly in how they are quick to demonise Israel over Ukraine, even when Israel is not in the wrong, while at the same time being silent when Israelis are murdered in the streets by ISIS and Palestinian terrorists.

You may remember a few weeks ago how news headlines made a big deal about how Israel was supposedly not helping Ukraine. In fact, this news caused some of our supporters to contact us and express their concerns that Israel was not doing enough. Unfortunately, they had read news headlines and stories which were being written to smear Israel – which is a routine occurrence from some media outlets.

Stories that Israel wasn’t supporting Ukraine circulated after Ukraine’s President Zelensky spoke to Israel’s Knesset and strongly urged them to help more than they were doing.

Zelensky was strong in his words. He said Israel wasn’t doing enough. And the Ukrainian President was understandably saying everything needed to spark a response – he was in a life and death situation after all.

However, the media took his words out of context and twisted them to give the impression that Israel wasn’t supporting Ukraine.

This was not true.

In fact, Zelensky made a public remark after the negative headlines thanking Israel for all their help and explaining that they were a key mediator in trying to negotiate peace between Ukraine and Russia.

Israel is actually doing a lot to help Ukraine.

Israel has taken in more Ukrainian refugees than any other Middle East country and many Western nations. And most are not Jewish. Israel condemned Russia at the United Nations. Israel was the first country to establish a field hospital in Ukraine.

To put into perspective how important Israel’s field hospitals are: The World Health Organization (WHO), a specialized agency of the United Nations concerned with international public health, named the Israel Defense Forces (IDF) field hospitals as the highest ranking and the only country in the world with “Type 3” Field Hospital classification. It is superior to what any other country can offer.

Additionally, Israel is in a unique position to act as a mediator between Russia and Ukraine. Russia is the strongest force in Syria and as Israel borders Syria it affectively has a land border with Putin’s regime. Israel regularly has to attack Iranian terrorist targets in Syria to stop their threats against the Jewish state, so Israel has to navigate these relationships carefully.

Israel’s Prime Minister just last week had telephone calls with both Zelensky and Putin and is trying to mediate peace between the countries. And even though Israel has kept neutral with Russia, it is clear from Israel’s words and actions that the government is on the side of the Ukrainians and is doing all it can to save lives in Ukraine without offering weapons.

In contrast, the Palestinians are attempting to appear neutral while secretly (and sometimes openly) supporting the Russian invasion.

When President Zelensky spoke at the Knesset, all Arab parties boycotted the meeting. They didn’t even listen to the Ukrainian leader’s words.

The Palestinian Authority claimed it was “neutral” on the issue of Ukraine and Russia. They have offered no assistance to Ukraine and have not condemned Russia (you’ll note there was no media backlash about that). They are not doing anything to help the situation and instead tried to take the limelight for themselves and accuse the world of ignoring the “crimes” against Palestinians.

You can also see how public opinion shows the feeling of the nations messaging regarding the war also. The vast majority of Israelis are supporting Ukraine against the Russian invasion. Ukrainian flags are regularly seen draped on the shoulders of Jewish worshippers at the Western Wall and the Israeli government have put on numerous displays of support for the Ukrainian people.

In Palestinian society, however, we have seen videos of open support for Russia’s invasion, including a wedding singer asking Putin to drive Ukraine’s women to Palestine so Palestinian men can marry them. That isn’t the type of song you expect to be sung in a culture that has empathy for Ukrainian victims of war.

Palestinians have even expressed online how Ukrainian refugees that come to Israel are “invaders” and will be treated the same as Israelis. Again, no sympathy at all for victims of war, instead there is a hatred for them because they were saved by Israel.

And shockingly that threat came true when a Palestinian terrorist this week shot dead five people in Israel, including two Ukrainian nationals. Palestinians were seen celebrating this deadly attack by handing out sweets to children.

The problem with media companies is that they are businesses. And while they are trying to push their agenda/narrative they are also trying to sell the news. That often trumps accuracy. If they can create drama they will do so because drama sells.

They also hide behind headlines. A newspaper can publish articles with misleading headlines but they are covered by the fact that they will bury the truth in a sentence somewhere inside the article.

The problem in the age of social media is, statistical data reveals, that most people will read the headline only and then go to the comments. And corrections for stories never get as many views as the original story. Therefore most people go around believing the first headline they see on a story.

This moves us on to our next point. The way that the media portrays the Israel-Palestinian conflict.

Just imagine if an attack happened in Paris or Sydney Australia. An ISIS attack anywhere in a Western nation would be headline news. However, an ISIS attack in Jerusalem hardly made headlines.

Additionally, the BBC showed itself this week to favour highlighting Palestinian deaths than Israeli ones.

When a Palestinian gunman shot dead five people, including three Israelis, one of whom was an Arab Christian, and two Ukrainian citizens. The BBC simply gave the headline: “Five killed in latest deadly attack in Israel”

That headline could mean anything. That there was a domestic shooting, or maybe some Israelis shot dead some Palestinians. When, in fact, it was describing the terror attack mentioned above where two Jews, one Arab and two Ukrainians were murdered by a Palestinian terrorist.

However, when Israeli police went to arrest terrorists linked to the murder of these victims, they went to Jenin and were met by hundreds of Palestinian men, flanked by dozens of armed terrorists, and a gunfight ensued. Two Palestinian terrorists were killed by Israeli police in that operation to subdue criminals.

The headline the BBC ran with was as follows: “Two Palestinians killed in Israeli West Bank raid”. 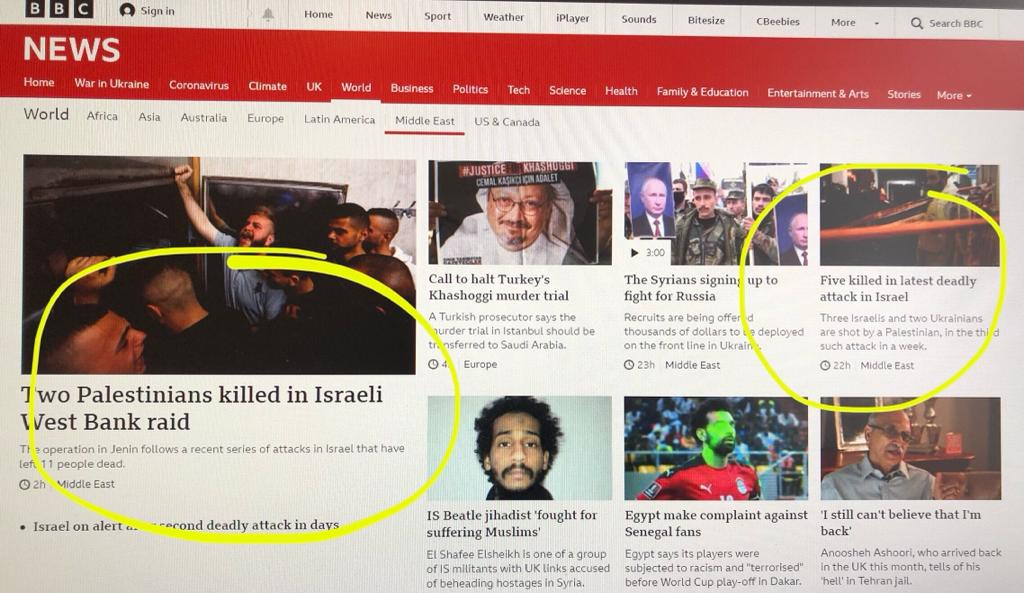 The practices of the BBC in its demonisation of Israel are reprehensible. They are shaping the narrative of Britain to hate Israel. They are inciting against the world’s only Jewish state. And they are doing it using the British name and the people’s money to accomplish it – shameful!

As Christians, we have to be wise as we navigate the world. And particularly when dealing with media corporations who are attacking the things that God loves. Don’t be deceived by the lies of the media.

Let’s continue to pray for Israel’s leaders. Our stand with Israel doesn’t stop because Israel does something we disagree with. The Bible tells us to bless Israel and the Jewish people, there are no conditions attached to that command.