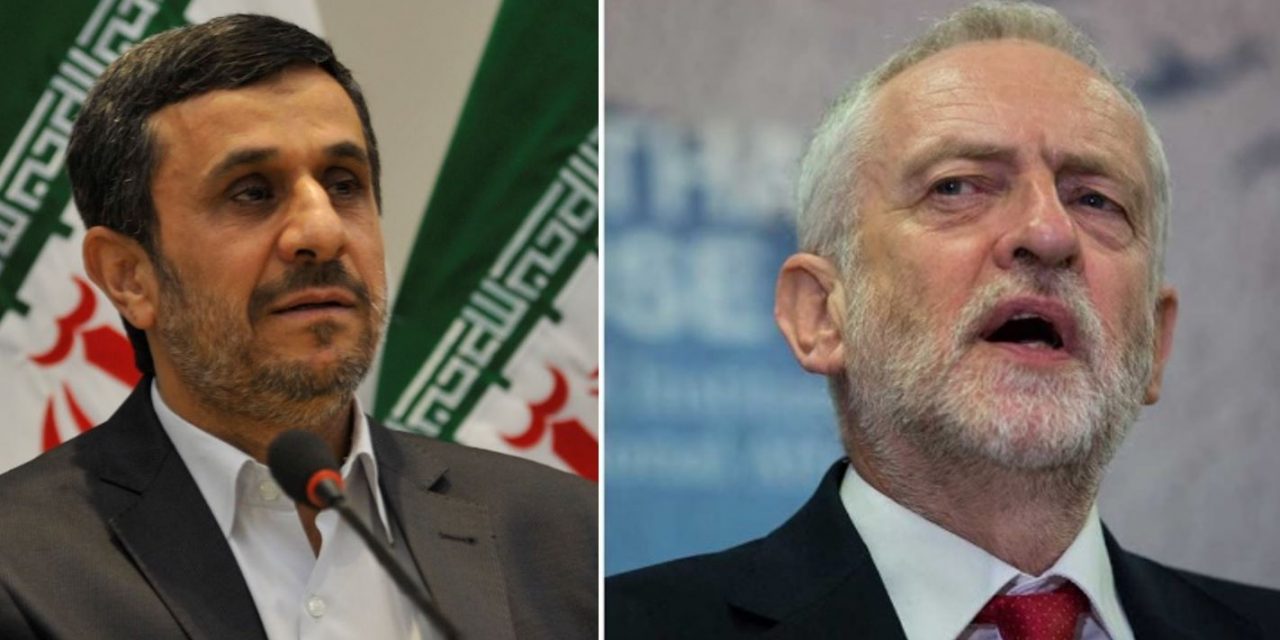 Jeremy Corbyn defended an infamous anti-Semitic speech by former Iranian President Mahmoud Ahmadinejad that called to “wipe Israel off the map” and pledged not to spare any supporter of Israel: “anybody who recognises Israel will burn in the fire of the Islamic nation’s fury”.

In a 2005 address to students in Tehran, Ahmadinejad praised “the new wave [of attacks] in Palestine…[which] will wipe this stigma [Israel] from the face of the Islamic world.”

The then-president threatened that those who acknowledged Israel’s existence “will burn in the fire of the Islamic nation’s fury.”

Investigative journalist, Igg Ostanin, reveals that Corbyn, writing for the far-left Morning Star shortly after, opposed critics of the speech saying “the context overlooked by the sensationalist headlines was that his speech also pointed out what Israel is doing to Palestine”.

Then a Labour backbencher, Corbyn wrote of “salient points” he said were missed by the media: including Israel’s “illegal and undeclared nuclear weapons”, “the apartheid wall” and “the systematic depopulation of Palestinians from Jerusalem”.

Corbyn concluded that, “The opportunity provided by Ahmadinejad’s speech should be used to build dialogue with and within Iran, and…on the issue of Palestine.”

Ostanin points out “Yet the violent antisemitism of Ahmadinejad’s speech was undisguised, and Corbyn could not have missed it. His article was illustrated with a photo of then president delivering the speech behind a lectern bearing the words ‘The World without Zionism.'”

Leading figures and the media were unequivocal in condemnation of the speech. Nobel-prize winner Elie Wiesel, who survived the Holocaust said “our immediate response cannot be anything but anger and outrage”.

US diplomat Richard Holbrook, who led team that brokered the 1995 Bosnian Peace Accords, compared the rhetoric to that of the Nazis: “when a leader of a country says something as outrageous and as vile as what has been said by the Iranian president — or by Hitler — we must take notice”.

The Labour leader has long-standing ties to the regime in Tehran. In 2009 and 2012, Corbyn received £20,000 ($26,285) for a series of appearances on Press TV, the state-controlled propaganda channel of the Iranian regime.

It was on Press TV that Corbyn famously said it was a “tragedy” that the United States had killed Al Qaeda leader Osama bin Laden. Britain revoked the channel’s license in 2012, following a ruling by the country’s communications regulator that editorial decisions were being made by the mullah regime in Tehran.

In 2014, not long before he took on the Labour leadership, Corbyn spoke at an event in London to mark the 25th anniversary of the Iranian Revolution. In his speech, he praised the “tolerance and acceptance of other faiths, traditions and ethnic groupings in Iran.”