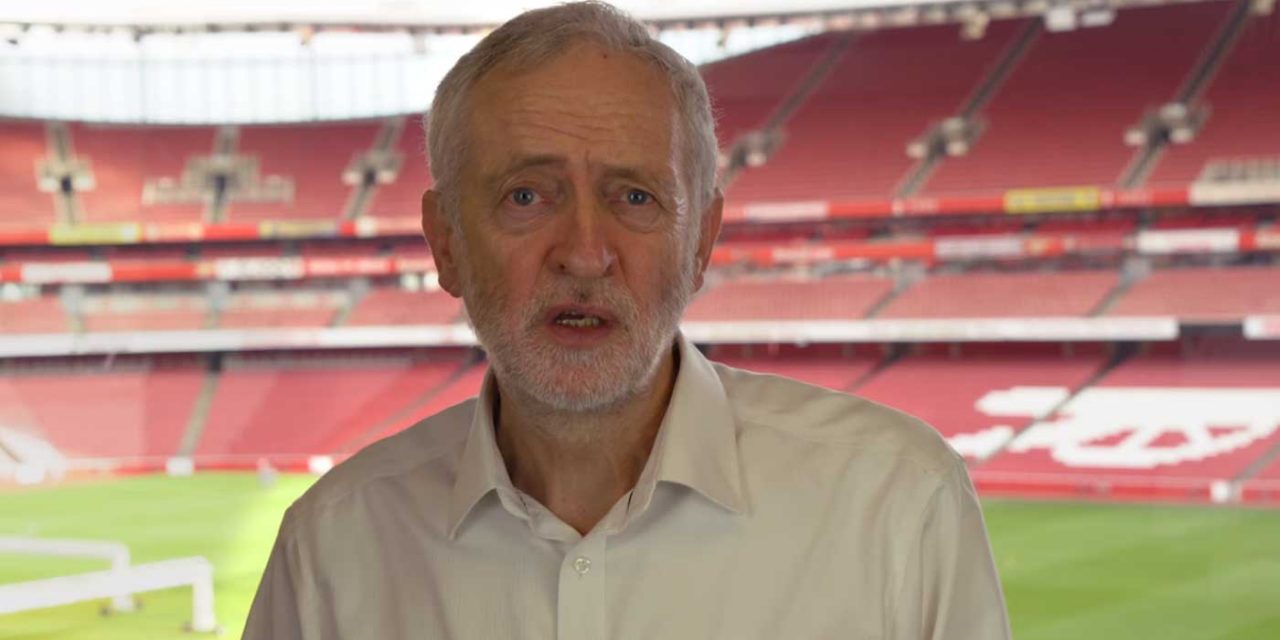 Jeremy Corbyn is a lifelong supporter of Arsenal and is frequently seen at home games for the club. He regularly talks about the team he claims to “love” and has been filmed on numerous occasions chatting to fellow colleagues about it. There is little doubt that Corbyn is a big fan of Arsenal. This love, however, was overridden at one point by his hatred of Israel.

The Daily Mail has unearthed a speech from Jeremy Corbyn in 2006 where he advocates a boycott of Arsenal because the club accepted an advertising campaign by the Israeli tourist board.

The Labour leader told the Palestine Solidarity Campaign Trade Union Conference in 2006, “We must campaign against and boycott Arsenal football club for their arrangement with the Israeli tourist board.”

“It is wrong to treat both parties [Israel and the Palestinians] as equals,” he said, adding: “The situation is the running sore of US foreign policy.”

The deal is said to have been worth £350,000 at the time and was approved by Emirates airline, even though the United Arab Emirates is known for its hostility to Israel.

Gideon Falter, chairman of the Campaign Against Anti-Semitism, said: ‘Jeremy Corbyn’s obsession with Israel blinds him.

‘He has called for a boycott of his own football club, not because of its close association with the Emirates – which engages in torture and execution – but because of some obscure connection to Israel.’

Whilst the revelations about his hatred of Israel being stronger than his loyalty to Arsenal is one thing, the Daily Mail also found that at the event he also shared the stage again with known Israel haters and extremists.

Listed as a speaker alongside Mr Corbyn at the 2006 conference was preacher Daud Abdullah, who called for attacks on the Royal Navy if it tried to prevent arms smuggling into Gaza, and led a boycott of Holocaust Memorial Day.

A number of inflammatory comments were made at the event, with speakers calling Israel ‘the biggest threat to world peace’ and ‘the cuckoo in the nest of the Middle East’.

In response to the latest revelation, a Labour spokesman said: ‘Jeremy has never boycotted an Arsenal game. He does support targeted action aimed at illegal settlements and the occupation of Palestinian territories, and has backed campaigns to bring it to an end.’

The Arsenal ground is located in Corbyn’s Islington constituency has in the past sponsored motions in parliament to congratulate Arsenal on victories in the FA Cup, according to the Daily Mail.

If there was any doubt of his loyalty to Arsenal, the below video was recorded at Emirates Stadium and in the video, Corbyn says, “Arsenal, the club I love”.