Christians, Jews and The Queen

This year the Queen celebrates her 90th Birthday. She is Britain’s longest reigning Monarch and has played a monumental part in modern British history, being an ever-present figure of stability both at home and abroad.

As the celebrations are set to continue through the year, we reflect on her legacy that has blessed both Christians and Jews.

In 1990, the Queen’s late sister, Princess Margaret, visited Maidenhead synagogue. She was attending a service marking the synagogues 50th anniversary and was struck by the fact that the Rabbi read a prayer for the good health and wise counsel of The Queen.

When it was explained to her that the prayer was not a one-off but is recited every Sabbath, in every synagogue in Britain, she remarked: “How lovely, they don’t do that for us in church; I’ll tell my sister.”

It is quite remarkable, and challenging, to think that British Jews pray for their Queen more than many Christians. It is a testament to the character of this godly woman and a demonstration of her respect for the Jewish people.

Former Chief Rabbi Jonathan Sacks met the Queen many times, and recalls a moving occasion. He writes: “Punctuality, said Louis XVIII of France, is the politeness of kings. Royalty arrives on time and leaves on time. So it is with Her Majesty the Queen, with one memorable exception.

“The day was 27 January 2005, the sixtieth anniversary of the liberation of Auschwitz, and the place, St James’ Palace. The Queen was meeting a group of Holocaust survivors. When the time came for her to leave, she stayed. And stayed. One of her attendants said he had never known her to linger so long after her scheduled departure time. She gave each survivor – it was a large group – her focussed, unhurried attention. She stood with each until they had finished telling their personal story.

“It was an act of kindness that almost had me in tears… It brought a kind of blessed closure into deeply lacerated lives.”

This strong connection was again on display last June when the Queen and Prince Phillip visited Bergen-Belsen concentration camp. The Queen had never been to a former concentration camp and it is said that she personally requested this visit. After taking in the site, she met with Jewish survivors of the camp as well as some of their British liberators and was deeply moved by the whole experience.

Chief Rabbi Ephraim Mirvis accompanied her visit and said, “I told the Queen that the Jewish world appreciates enormously her gesture in coming here, because it shows her solidarity with our pain and suffering.”

The Queen clearly has great respect for Rabbi Mirvis, this April hosting him and his wife in Windsor as part of her 90th Birthday celebrations. They stayed the night at the Royal residence following a special dinner with Her Majesty and Prince Phillip, and a small number of other high-profile guests.

During his stay, the Chief Rabbi presented Her Majesty with a birthday gift of a hand crafted piece of art, designed by British artist Myra Levy, which featured a unique ‘paper cut’ border around a specially calligraphed version of the prayer that the Jewish people say for the Royal Family in synagogues each week.

Chief Rabbi Mirvis also penned the following letter to accompany the gift, “When the country has celebrated moments of the greatest national joy and when we have struggled together in times of the greatest desolation, you have been generous in your wisdom and unwavering in your fortitude. Since Jews resettled in Great Britain some 360 years ago, we have relentlessly pursued the great British dream, to prosper in a society which sees the humanity in all people and feels a sharp sense of responsibility to one and all. Your Majesty, you are the very embodiment of these values.”

If you look at any coin with the Queen’s portrait on it you will see around her motif ‘ELIZABETH II D.G. REG. F.D.’ This stands for ‘Elizabeth II Dei Gratia Regina Fidei Defensor’, a Latin phrase that translates as ‘Elizabeth II, by the Grace of God, Queen, Defender of the Faith’.

For our Queen this is no mere title, but a commission that she has fully embraced.

The Royal Family has been responsible for some of the most viewed television broadcasts in history, such as Royal weddings, funerals and coronations. These events have enabled Church services, full of Christian messages, to be shown to hundreds of millions of people around the world. Many of whom may never set foot in a church.

In more recent years the Queen’s Christmas Messages have become noticeably God-centred with Scripture as the foundation for her messages. The Queen’s most recent Christmas message has been labelled her most Christian message to date. In it she reflected on the darkness of the past year and the hope that we have looking forward. It was a timely message as the world looked back on events of the past year mentioning how Christians, who are already the most persecuted religious group on the planet, have come under increasing attack.

The Queen made the most of the opportunity and shared the love of God for all to see. It seems that in her later years, and seeing the state of the world today, the Queen is using each opportunity she has to share her faith.

The Church of England released a number of prayers for the Queen for her 90th Birthday, including the following:

“Heavenly Father, as we celebrate the ninetieth birthday of Her Majesty the Queen, receive our heartfelt thanks for all that you have given her in these ninety years and for all that she has given to her people. Continue, we pray, your loving purposes in her, and as you gather us together in celebration, unite us also in love and service to one another; through Jesus Christ our Lord. Amen”

We thank God for our Queen and her many years of service. She has been a great friend, not only to Christians, but the Jews and people of all faiths.

Let us continue to uphold the Queen and Royal Family in our prayers. 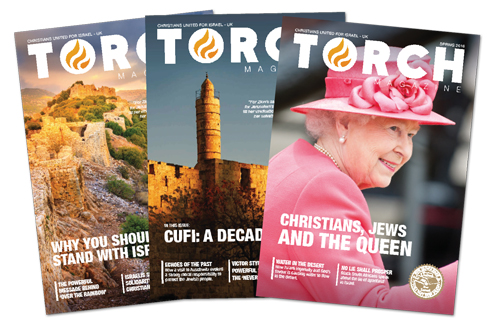