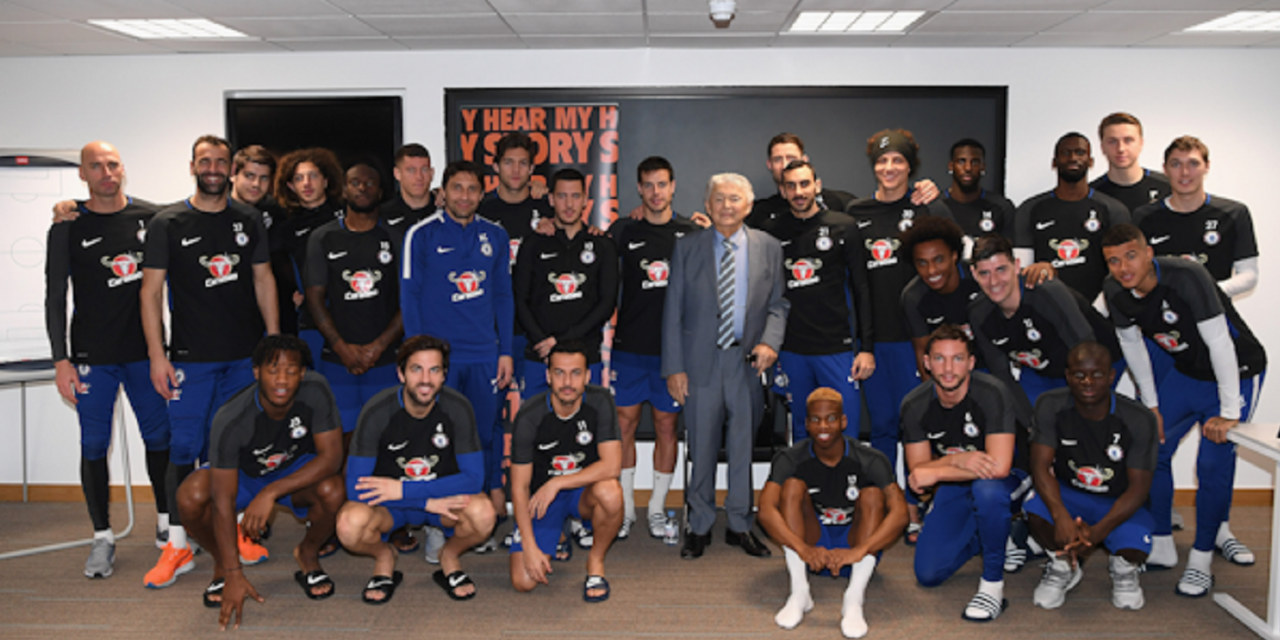 Chelsea captain, Gary Cahill, described the story of Holocaust survivor, Harry Spiro both horrific and inspiring after the 88 year-old spoke to the club’s first team squad.

“There can be no better way to help this cause than hear the first-hand account from Harry of his, his family’s and many others’ plight at the hands of the Nazis,” said a statement on the Chelsea website, “so in a talk organised by the Chelsea Foundation, in partnership with the Holocaust Educational Trust, he spoke to the squad and coaches in the Cobham meeting room more usually used for meticulous planning ahead of training and matches.”

All present were enthralled by the 88-year-old’s story which was both horrific and inspiring. Captain Gary Cahill spoke about it and the wider campaign on behalf of the team.

“I have never heard a testimony from a survivor before, and it was an incredible story,’ he said. ‘I am grateful Harry was able to share it with us.

“You could see everyone was fixated on his story. You found yourself so intrigued as to what he has been through in his life. It’s incredible to imagine for someone like myself who has grown up in a normal environment, the things he has gone through and the pictures he must have in his head growing up as a young boy which you should never, ever see.

“Then on the flipside, there was the great ending to the story. He has a beautiful family and a nice life now. We feel privileged to have him here and see him and hear his story.”

.@garyjcahill: ‘I have never heard a testimony from a survivor before, and it was an incredible story. I am grateful Harry was able to share it with us.'

The campaign to tackle anti-Semitism was launched Tuesday and is supported by the club’s owner Roman Abramovich. It aims to raise awareness of and educate our players, staff, fans and the wider community with its ‘Say No to Antisemitism’ message.

“The Chelsea Foundation’s Building Bridges is important throughout the whole year, but the club have shown we are fully behind this campaign,” said Cahill, “It is something the club is very passionate about and us as players are very passionate to get behind as well, as you saw today.”

Harry was 10 years old when the Nazis invaded his native Poland and from that point on until he was liberated in 1945 he experienced so much.

He lived in an overcrowded, unhygienic ghetto where he was forced into factory labour. He was separated from his family and 22,000 others he had lived with in the ghetto who were all murdered. He lived in a succession of camps with a dehumanising effect and then was forced to march to another in Czechoslovakia where only one in 10 who had begun the long walk arrived alive. It was there he was eventually liberated by Soviet soldiers.

In 1945, 732 child survivors of the Holocaust were allowed to settle in the UK and one of those was Harry. He now regularly talks in schools.

This is a lot different,’ Harry said after his meeting with our players.

‘I don’t find it difficult to tell my story any more, and I do like to watch a good game of football. It was very difficult to watch Chelsea’s game yesterday though! Somehow, you could feel that Norwich was going to equalise.

‘Football is helping a lot in the fight against antisemitism. Take for example Chelsea. I remember 30 or 40 years ago and when my kids were younger, they supported Chelsea and very often I would take them there, and among the crowd you had a lot expressing very unpleasant things against Jews.

‘There were areas where a Jew was not happy to be amongst them. Now you don’t have this anymore so there is a lot you have done in only one club.

‘There is a still a big job to do but footballers do have a lot of influence on youngsters, and youngsters are the most important. Football is a great influence with youngsters and you have footballers supporting the message of not to hate. You have done a good job.

‘Only through generations of educating can you achieve the right thing. By hating you achieve nothing.’

We're proud to join the @worldjewishcong #WeRemember campaign ahead of International Holocaust Remembrance Day. This is part of our long-term commitment to educating our players, staff, fans and the wider community about antisemitism in football.https://t.co/bX6boyDY1c pic.twitter.com/uCETI9use0