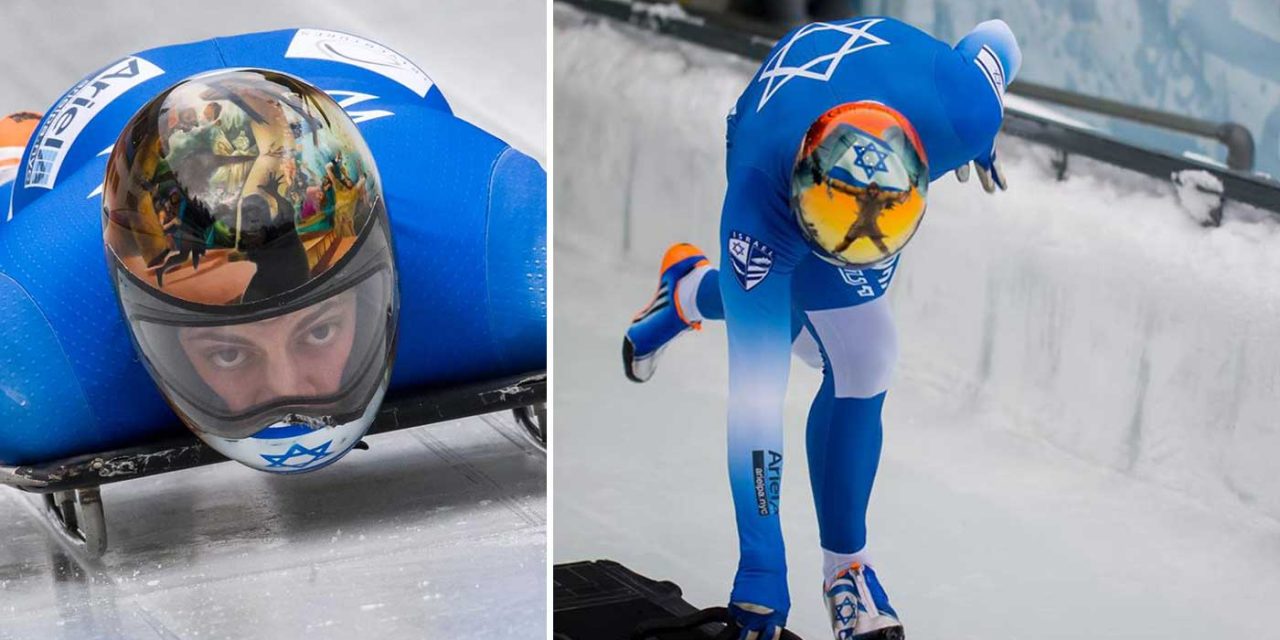 AJ Edelman is Israel’s first skeleton sled competitor in the Winter Olympics and is competing this week in PyeongChang in South Korea.

The “Hebrew Hammer” as he is know is representing the country that he loves and is using Biblically inspired helmets to spread a message of support for Israel.

“I have two helmets that I use in competition. Both helmets are painted with the design in mind of not just being something interesting to look at but also meaning something to myself and to those watching,” he wrote on Facebook.

“The themes of the helmets are ‘The strength of our people and homeland, and the importance of Hakarat Hatov (the obligation to be thankful/acknowledge the good done to you)'”.

“The theme of the strength of the people and land of Israel (Am and Eretz Yisrael) is depicted on the helmets through Samson (breaking pillars, fighting a lion). I wanted to always be able to look at my helmet and remember who I was representing and why, and for others to do the same.”

“On one helmet are the additions of the Shma prayer (“Hear Oh Israel…”) and “Im Tirtzu, Ayn Zo Agada” (“If you will it, it is no dream”, from Theodor Herzl).”

It was Israel that inspired him to both compete in skeleton and to make Aliyah.

“Four years ago, I thought about how I could help Israel in sports,” Edelman, 27, told Haaretz.

“My game was hockey, and I wanted to do something really, really big. Sport wasn’t a thing in our community in Boston – we have a lot of doctors and lawyers, but no athletes. I wanted to set up a foundation for athletes to do something for Israel. And then I saw this crazy sport on television with skeleton sleds. I thought that if this is such a crazy sport, Israelis can look at it and think ‘Huh, can we do that too?’”

He takes pride in the fact he will be representing Israel when the Games begin in PyeongChang, South Korea, on February 9, despite having so little funding or his own trainer. “I so love representing us that, every day when other athletes signed up for three runs, I did eight. They did about 50 runs on the course every year and I did 300.”

“When I wasn’t out on the course, I watched video clips on YouTube,” he relates. “I wanted to ‘retrace’ the runs in my mind so that when I would actually be on the sledding course, I would know what to do,” he adds.

“The pain during the first two years was so huge – every time you crash into a wall, at 140 kilometers [87 miles] per hour, it hurts a lot. It’s hard to describe, but in the third year and this last year, it was a lot better and I rose in the rankings.”

A J Edelman, aka “The Hebrew Hammer”, is entirely self funded, and to help raise funds he put together some advertising videos. Some of which are rather amusing.