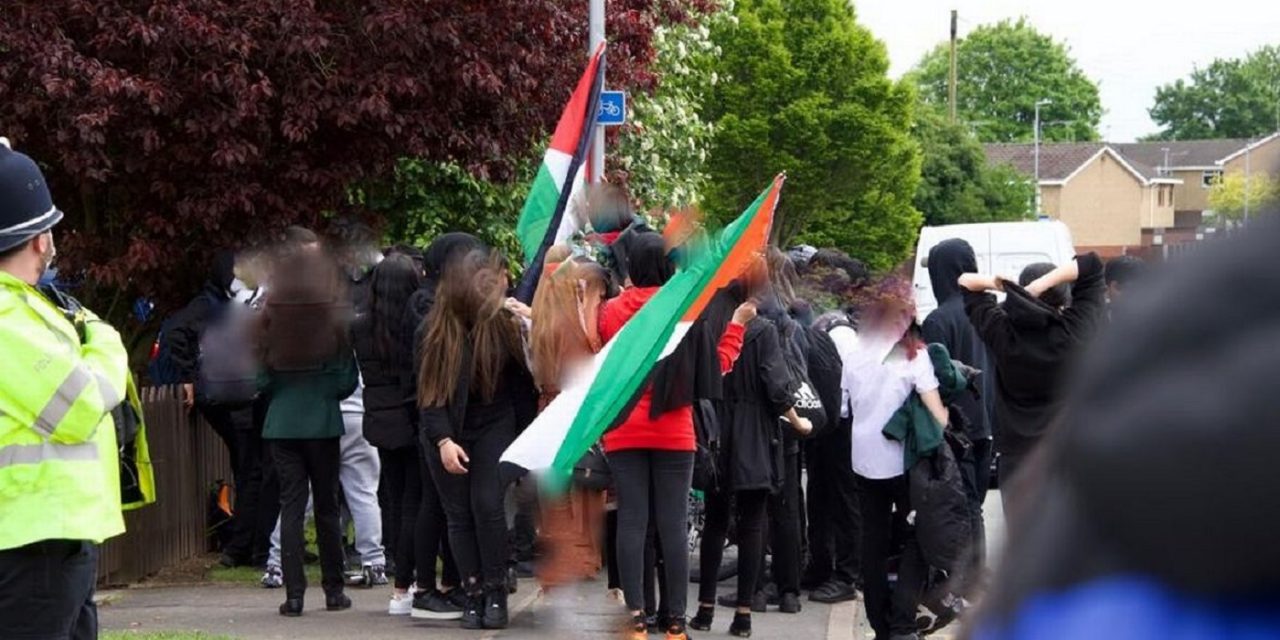 Schools across Britain became hotbeds of anti-Israel sentiment during the recent 11 day conflict between Israel and Hamas.

They range from students staging demos to teachers being investigated for promoting neutrality with one school head calling upon the Department for Education for guidance in how to deal with in-school protests.

Here are number of examples of tensions in UK schools that have been reported over the past few weeks:

Angry protesters gathered outside Allerton Grange School, in Leeds, after the headteacher, called the Palestinian flag a “call to arms”.

Headteacher Mike Roper was forced to apologise after Mr Roper asked students not to use “flags or symbols” as some people may see that flag and “feel threatened and unsafe” and he goes onto add “that flag is seen as a call to arms and seen as a message of support for anti-semitism.”

Video of the speech was posted online, going viral and prompting a backlash and protests, with extra police having to be posted outside the school.

The assembly was intended, the school said, to address tensions within its multiracial student community caused by the situation in Israel. But instead the speech brought accusations of “blatant Islamophobia” and staff being instructed to help students into and out of school safely following the furious response.

During a protest at Clapton girls’ academy in east London, students sat down and chanted “free Palestine”, refusing to return to lessons. One student, Mina, said the children had decided to protest after teachers removed posters about the Palestinian struggle from the walls of the schools.

Woodford County High School, in north London, said it had removed images of the Palestinian flag from school white boards and pin boards and “at times (the flags) were inflicted on school property as graffiti”.

Jo Pomeroy, the headteacher, stressed in a letter to parents last week that schools were “apolitical organisations” and “school populations are not to be used as captive audiences for political messaging by anyone”.

Schools in the London borough of Redbridge were made aware of a plan set up by students to wear the colours of the Palestinian flag, or to draw the flag on their hands, at school last Friday, Ms Pomeroy told parents.

“Social media is a powerful but a potentially damaging tool at such times,” she wrote. “Young people are in receipt of vast amounts of unfiltered information and being called upon to involve themselves in all sorts of activities.

Manchester’s Loreto college decided to close the institution after hearing about a planned protest. About 200 students went on to assemble near the gates waving flags, with members of the public joining the march.

A Jewish teacher resigned from a non-Jewish school in London after she described being bullied by students.

“They were trying to stick Free Palestine stickers in my hair, I broke into tears, I couldn’t take my class that morning,” said the teacher, who wasn’t named.

The teacher said the school was indifferent to the circumstances that led to the resignation.

At a secondary school in Leicester, a video emerged of pupils standing on tables and shouting ‘Free Palestine’ and ‘Allahu Akbar’ in an organised demo sanctioned by the school. Jason Smith, principal at the college which has 1,300 pupils aged between 11 and 16, said staff watched the protest and allowed it to take place.

Beauchamp College in Leicestershire, a college pledged to investigate after a teacher told pupils to remain neutral in the Israel-Gaza conflict, sparking an outcry among a group of current and former students.

Ssocial media posts emerged expressing student’s distress over the reaction of teachers to their pro-Palestinian protest. A video appears to show a member of staff telling students they could not “support one side over the other” sparking a backlash.

An investigation was launched by Oulder Hill Community School, Rochdale after a pupil was allegedly reprimanded after protesting about Gaza. In a letter to parents the school said: “We must allow this investigation to take its course and avoid making comments or taking actions that may prejudice these proceedings.”

At The de Ferrers Academy, in Burton upon Trent, a teacher is facing calls to resign after they reportedly ordered a student to wash off a Palestinian flag they had drawn on their hand.

A petition calling for the teacher to be sacked had more than 1,100 signatures by Thursday evening. It is not clear if the person who started the petition has any links to the school.

The school said that before it was able to investigate the incident, which took place last week, “many deeply unpleasant and unacceptable posts” were made on social media.

Ian McNeilly, chief executive of The de Ferrers Academy Trust, which has seven schools in the area, has called on the Department for Education to investigate the issue of in-school protests.

“We are teachers, school leaders and are also increasingly expected to be social workers, mental health practitioners and a variety of other things,” he told The Telegraph.

“We cannot be experts on everything, particularly the complexities of politics and conflicts in the Middle East.

“We could do with some help from the Department of Education in terms of quality assured teaching resources on the complexities around these issues which have been prepared and written sensitively by experts in their field.”

The Department for Education confirmed it is working to produce guidance to help schools remain impartial, while also allowing students to have positive discussions around sensitive topics.

A department spokesperson said: “Teaching needs to promote respect and tolerance between people of different political beliefs, and schools must maintain political impartiality by law. We are working on further guidance to support them in this.”

Meanwhile, at least 25 teachers from a Jewish school in London quit their trade union to protest its call for participation in pro-Palestinian rallies.

The surge in incidents relating to schools come amid reports that there were more anti-Semitic incidents in May than at any time since records began.