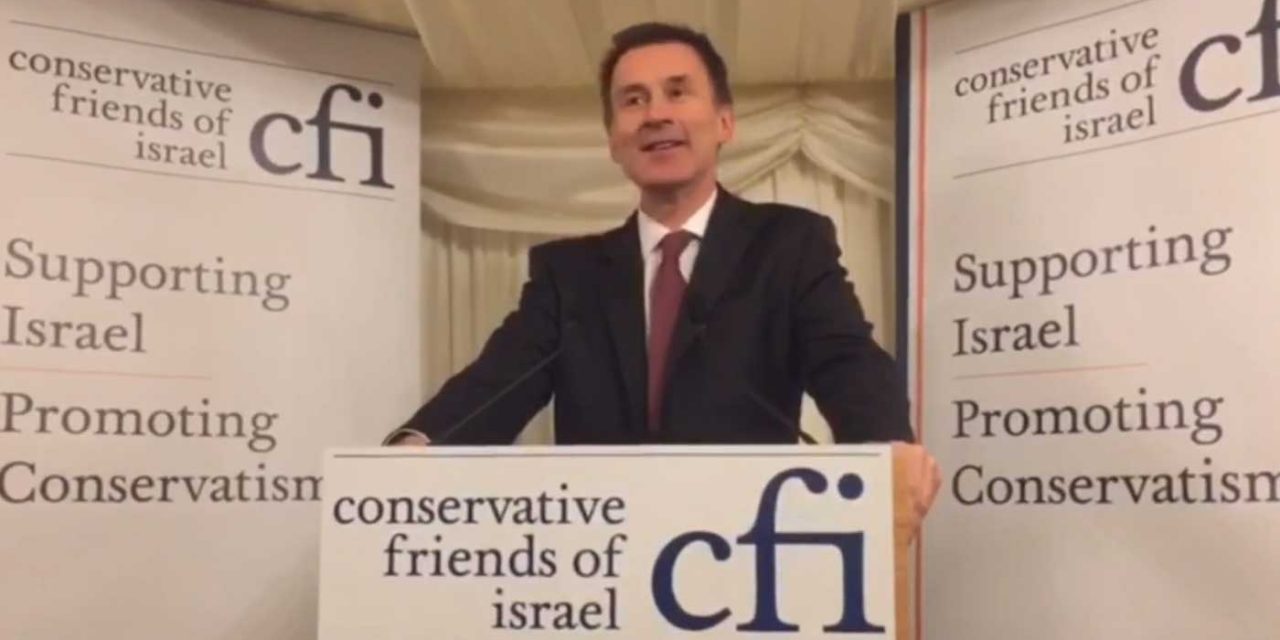 Jeremy Hunt has become the first UK Foreign Secretary to publicly admit that the White Paper of 1939 was one of the “dark moments” in history.

The 1939 White Paper was issued by the British government and lasted until 1948. It placed restrictions on Jewish immigration to what was then the British Mandate for Palestine. It also allowed the Arabs to have a say on future immigration of Jews and restricted Jewish rights to buying land.

UK Foreign Secretary Jeremy Hunt was speaking at the Conservative Friends of Israel Annual Parliamentary Reception this week when he hailed the “very strong relationship” between Britain and Israel that originated with the Balfour Declaration but admitted that Britain has not always made the right decisions.

“There have been some black moments when we have done the wrong thing such as the 1939 White Paper which capped the number of visas issued to Jews wanting to go to the British mandate of Palestine”, Mr Hunt said.

It is believed to be the first time a British Foreign Secretary has made such remarks, according to CFI.

Hunt continued, speaking about the current relationship between the two countries, saying the UK “has been a very strong deep-rooted friendship based on a huge historic admiration for what the State of Israel has achieved against all the odds, the challenges of geography, the challenges of history, the challenges of having many neighbours who have posed direct threats to the existence of Israel, the challenge of being pretty much the only country in the world where other countries are dedicated to your total destruction and elimination, and despite that Israel has absolutely thrived as a modern high-tech country with a huge amount of prosperity”.

Foreign Secretary Hunt emphasised that the UK “will always stand shoulder to shoulder with Israel in stamping out antisemitism”. He added that last week he had the privilege of unveiling a statue of British Holocaust hero Frank Foley, stating that “if we don’t learn lessons, history will judge us very poorly indeed”.

It is rare to see the British government owning up to its mistakes when it comes to Israel. The admittance that Britain was wrong for issuing the 1939 White Paper is good. There are other mistakes we made in the run-up to Israel’s rebirth too, which we hope our government will also admit fault in. However, this is a step in the right direction.

Unfortunately, the UK’s current foreign policy in certain issues relating to Israel show we are making some more mistakes even today, such as trying to appease the Iranian regime with the Iran nuclear deal. They are also letting Israel down by siding with the Palestinian Authority, which is neither a legitimate governing body for the Palestinians nor a “partner for peace” for Israel. And the Home Office is yet to ban terror group Hezbollah in its entirety.

Unless our foreign policy changes in these issues then we are afraid that, to quote the Foreign Secretary, “history will judge us very poorly indeed”. Hunt’s comments, however, give some hope that the UK and Israel can develop an even greater relationship moving forward.

The White Paper of 1939[note 1] was a policy paper issued by the British government under Neville Chamberlain in response to the 1936–39 Arab Revolt. Following its formal approval in the House of Commons on 23 May 1939,[2][note 2] it acted as the governing policy for Mandatory Palestine from 1939 until the British departure in 1948, the matter of the Mandate meanwhile having been referred to the United Nations.[3]

The policy, first drafted in March 1939, was prepared by the British government unilaterally as a result of the failure of the Arab-Zionist London Conference.[4] The paper called for the establishment of a Jewish national home in an independent Palestinian state within 10 years, rejecting the idea of partitioning Palestine. It also limited Jewish immigration to 75,000 for 5 years, and ruled that further immigration was to be determined by the Arab majority (section II). Restrictions were put on the rights of Jews to buy land from Arabs (section III).