Prince Charles and Prime Minister Theresa May will attend the funeral of Shimon Peres on Friday following the death of the 93-year-old on Wednesday morning.

Tributes for Israel’s former Prime Minister and President have been pouring in from across the UK.

Buckingham Palace released a statement saying that The Queen was was “greatly saddened to learn of the death of Shimon Peres”.

The statement continued: “Her Majesty warmly recalls her meeting with Mr Peres in 2008, and sends her heartfelt condolences to his family and the people of Israel at this sad time.”

Her Majesty the Queen, who, like Peres was born before the modern State of Israel was founded, presented Israel’s former President in 2008 with an honorary knighthood. And earlier this year, Peres sent a video greeting to Her Majesty telling her that “life begins at 90”.

WATCH and SHARE: In 2008, Her Majesty Queen Elizabeth II awarded President Shimon Peres with an honorary knighthood at…

The Palace also announced that The Prince of Wales will be representing The Queen at the former Israeli President’s funeral on Friday.

Prime Minister Theresa May said in a statement, “I am deeply saddened to hear that Shimon Peres has died. He was a visionary and courageous statesman, who worked relentlessly for peace and never lost hope that this would one day be achievable. He was a truly deserving winner of the Nobel Peace Prize.

“My thoughts go out to the Israeli people and the family of Shimon Peres as they mourn the loss of a beloved father and compatriot – a great man who epitomised optimism and a belief that by working together we can build a brighter future for generations to come.”

The Archbishop of Canterbury, Justin Welby, praised Peres’s life, saying, “Shimon Peres led an extraordinary life of service to the nation of Israel, and to the cause of justice and reconciliation. His unshakeable commitment to a vision of peace endured in the face of every possible setback and spurred all those working for peace to persevere.

“When I met him in Israel in 2013 I was struck by his realism about the difficulties and dangers facing Israel, together with the profound hope for a better future that continued to animate his life and work. May it inspire all who continue to work for peace. My prayers today are with his family, the people of Israel and all those working for reconciliation in the Middle East.” 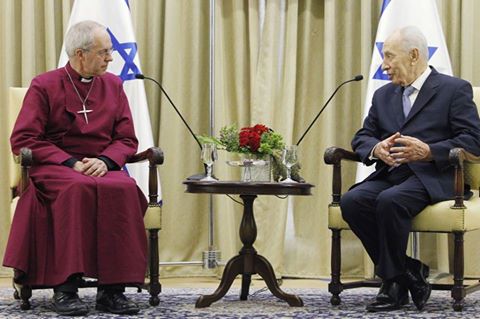 Foreign Secretary Boris Johnson also expressed his sadness describing Peres as one of the “great leaders of our time”.

He added, “In my last conversation with him he told me that ‘pessimists and optimists pass away the same way, But if you leave as an optimist you have had a better life.’ He certainly had a better life and throughout his long and distinguished career he was a towering figure in Israel and around the world. He was a man of action but also one of peace and we should remember his tireless efforts to secure a lasting peace in the Middle East.”

One of the founding fathers of Israel and a believer in peace has left us. Today we mourn the loss of a great man.

Former Prime Minister, David Cameron described Peres as one of the founding fathers of Israel and a believer in peace” in a tweet expressing his mourning as the loss of “a great man”.

It was his predecessor, the late Margaret Thatcher, who was one of his strongest supporters of Peres in Europe. In May 1986, she became the first British premier to visit Israel while in office, when he was still prime minister.

Shimon Peres was a political giant, a statesman who will rank as one of the foremost of this era or any era, and someone I loved deeply.

Former Prime Minister, Tony Blair, who was also a leadership contemporary of Peres, tweeted that he was a “political giant, a statesman who will rank as one of the foremost of this era or any era, and someone I loved deeply.”

Shimon Peres's role in Israel-Palestine negotiations won a Nobel Peace Prize & should be the spur for a renewed drive for peace and justice.

However Labour’s Shadow Foreign Secretary, Emily Thornberry, said that in Shimon Peres, “we have lost one of the iconic statesmen of modern history and our last connection with the great leaders who founded modern Israel.” Thornberry also described how Peres had fought bravely for independence and in defence of his country and how he had worked tirelessly to create a lasting peace in the region and expanding Israel’s influence on the world stage. She added, “He will always be remembered as a man of peace, and he should forever act as an example and inspiration for others to follow.”

Britain’s Chief Rabbi Ephraim Mirvis called Peres “a true giant among men” and “the greatest living example of an unshakable belief in the pursuit of peace against all odds”.

He added: “Tragically, thus far, we have not succeeded. But from Shimon Peres we learned that we must never let go of that audacious commitment to peace, even when all around us are ready to do so.”

Shimon Peres’s funeral is set to take place on Friday with world leaders planning to descend upon Jerusalem to attend.

Shimon Peres died Wednesday at the age of 93. He twice served as Israel’s Prime Minister and once as President in a long and illustrious political career.

The former President suffered a stroke two weeks ago, but his health deteriorated for the worse earlier this week.