Shimon Peres, the Nobel Prize-winning former Prime Minister and former President of Israel, died Wednesday morning at the age of 93.

Peres was one of the founding fathers of the Jewish State and dedicated his life to Israel. He twice served as Israel’s Prime Minister and once as President, as well as winning the Nobel Peace prize in 1994. He once said the Palestinians were Israel’s “closest neighbours” and might become its “closest friends”.

He was committed to serving his country; he was loved both at home and abroad and he always strived for peace. His legacy will live on for generations and today we would like to honour him by sharing with you some of the amazing accomplishments of his life. He truly was a man chosen by God for the time that he lived.

To see how the UK reacted to his passing, please click here.

Shimon Peres was born Szymon Perski on 2 August, 1923 in Vishnyeva, a small town in what is today Belarus (a country he held close throughout his life). His father was a wealthy merchant and his mother a librarian. They emigrated to Tel Aviv in 1934 as anti-Semitism was on the rise in Europe.

It is important and harrowing to note that the town he was born in had a recorded population of 2,650 people in 1907, of which 1,863 were Jewish. Some of those Jews emigrated before the Nazi invasion, however, on 30 August 1942 some 1,100 Jews were killed in a single day by Nazi SS forces, with the rest being taken to a nearby Ghetto and ultimately to concentration camps. Today Vishnyeva has no Jewish population, as those few who did survive the Holocaust emigrated shortly after the end of World War II. The town is not only the birth place of Shimon Peres but also Nahum Goldmann who founded the World Jewish Congress. A Jewish cemetery is all that remains of the Jewish footprint in the town.

During his childhood in what was then Mandatory Palestine, Peres got involved in Labor Zionism where he worked on a kibbutz and led youth groups. His leadership skills are what caught the eye of David Ben-Gurion, who would go on to be the first Prime Minister of Israel. Ben-Gurion took Peres on as a protégé.

Peres married his wife, Sonya, who he went on to have three children with. Sonya passed away in 2011.

His Service in Protecting the Jewish State

Peres dedicated his life to serving his nation. He was dedicated to defending Israel, ensuring that his people would be physically equipped to face any enemy.

In 1946, Under Ben-Gurion’s wing, Peres was made responsible for the purchase of all arms for the Haganah, the pre-state Jewish military. He helped to acquire weapons from all over the world, sometimes through smuggling, in order to help prepare his people for what would become a bloody and difficult war for statehood.

During Israel’s War of Independence he proved himself to be a highly effective manager and quickly rose up the ranks. In 1953, Prime Minister Ben-Gurion appointed him Director-General of the Defense Ministry. He was just 29 years old. 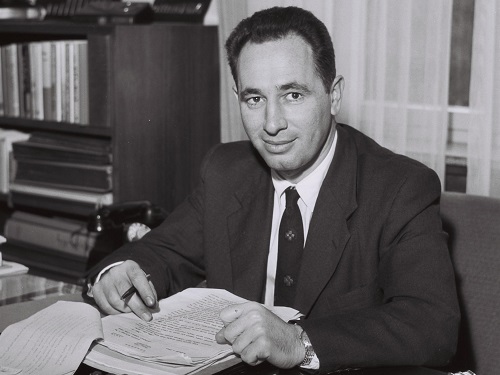 Peres’ creativity and negotiation skills helped transform the Israel Defense Forces from ragtag refugees with cast-off and often faulty equipment into an elite military force with state-of-the-art supplies. He did this despite continued arms embargoes on the country by, for example, purchasing parts of fighter planes piece-by-piece, assembling them in rural California, and then having volunteer pilots fly them to Israel via the North Pole to avoid detection.

He was the key person in negotiating Israel’s first military partnership with a world power after forging close-personal ties with military and political figures in France. This partnership helped advance the IDF’s weaponry and prepare them for future wars. He also used his influence to persuade the French in 1956 to help build Israel’s nuclear programme. Israel’s advanced nuclear weapons have served as a major deterrent to those who oppose Israel.

In February this year Peres spoke of this nuclear agreement saying, “Dimona helped us to achieve Oslo… because many Arabs, out of suspicion, came to the conclusion that it’s very hard to destroy Israel because of it, because of their suspicion. Well, if the result is Dimona, I think I was right.”

His various roles in the Knesset

In 1959 Peres was first elected to the Knesset as part of Ben-Gurion’s Mapai party (which went on to become Israel’s Labor Party), where he was appointed Deputy Defense Minister, the first of many positions he held in his 48 years in parliament.

Peres’s greatest moment as defense minister came on June 27 1976, when an Air France plane en route from Tel Aviv to Paris, with 248 passengers on board, was hijacked by Palestinian militants and diverted to Entebbe, Uganda. The hijackers demanded that Israel release from jail 40 Palestinian militants in exchange for the hostages, many of whom were Jews and Israelis.

In Israel, Prime Minister Rabin and his chief of staff felt that they had to negotiate with the hijackers, but Peres kept his nerve and urged them to play for time and plan a military operation to rescue the hostages.

On July 3, in a daring raid, Israeli commandos landed in Entebbe, freed the hostages and brought them to Israel. When the operation was successfully concluded the chief of staff praised Peres by saying that he deserved “all the credit” for pushing for a military solution. 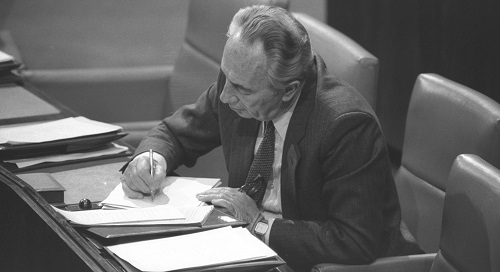 PRIME MINISTER PERES TAKING NOTES IN HIS SEAT IN THE KNESSET.

His roles in the Knesset saw him as Minister of Immigrant Absorption, Minister of Transport and Communication, Information Minister, Minister of Finance, Defense Minister and Foreign Minister.

Peres served the Knesset continuously from 1959 until 2006, when he took a hiatus.

His service to Israel as Prime Minister

In 1977, Shimon Peres became acting Prime Minister of Israel for two months after then Prime Minister Yitzhak Rabin stepped down from the role after his wife became embroiled in a financial scandal.

Peres won election in 1984 and served as Prime Minister until 1986. During that time he led the “Economic Stabilization Plan” that saved Israel’s economy and lowered inflation from 450 percent to 14 percent.

Peres again served as acting Prime Minister of Israel for eight months between November 1995 and July 1996 after he again took over the position of Yitzhak Rabin. This time due to Rabin’s assassination. It was during this time that Peres initiated Operation Grapes of Wrath, an offensive launched against Hezbollah in Lebanon after various missile exchanges between Israel and Hezbollah.

Israel conducted air raids in southern Lebanon in an attempt to break Hezbollah’s military stronghold in the area. Unfortunately, one incident sparked controversy when a UN compound was accidently shelled, resulting in the deaths of 106 Lebanese civilians.

The Israeli government immediately expressed regret for the loss of innocent lives saying that a Hezbollah position was the intended target and the UN compound was struck in error after a gunner miscalculated the range.

Prime Minister Shimon Peres, who did not order the shelling, said after the incident, “We did not know that several hundred people were concentrated in that camp. It came to us as a bitter surprise.”

Both Israel and the United States condemned Hezbollah for “shielding” and positioning themselves so close to civilians. Israel only shelled the area because it was responding to rocket fire from that location by Hezbollah terrorists.

His Legacy of Peace

Peres will be known most widely for his role in the signing of the Oslo Peace Accords.

Peres was Israel’s Foreign Minister at the time and was the official supervisor of secret negotiations with the Palestinian Liberation Organisation. His work resulted in the 1993 signing of the Olso Accords between Israel and the PLO, which was to bring about peace between Israel and the Palestinians and were signed at the White House under the watch of President Bill Clinton.

Peres had a strong desire for peace, but it was a dream that would go unfulfilled. Despite the high praise of the Oslo Accords, the peace was broken shortly after when Yassir Arafat enacted The Second Intifada, sending terrorists to indiscriminately slaughter Israeli civilians.

Peres was also blinded by a desire for peace when he expressed his support for the disengagement of Gaza in an attempt to give the Palestinians a land they could govern and thus bring about peace. Although, we all know how that has turned out.

Despite his desire for peace, the reality is quite different. And it is still the Palestinians who are unwilling to seek the peace that is so desperately needed in the region. Peres, however, will always be known as a peacemaker, even by his enemies.

On the day of his dead Palestinian President Mahmoud Abbas came out to say that Peres was a “brave partner for peace”.

The 9th President of Israel

In 2007 Peres completed his final political reinvention when the Knesset appointed him as the ninth President of Israel, becoming the first Israeli President to have previously served as Prime Minister of Israel.

The Israeli presidency is a ceremonial role, acting as an advocate for the Jewish state. This was a role that came entirely naturally to him and he was able to promote Israel and peace on an international level, garnering the admiration and respect of many.

He was also willing to have fun and make jokes. The video below is a music video he made for when he joined Facebook.

After leaving office in 2014 he also released this comical video on his retirement.

Honoured by the Queen

In 2008 Peres was honoured by Her Majesty Queen Elizabeth II at Buckingham Palace. He received an honorary knighthood for his services. Watch the video below.

Shimon Peres was an ardent defender of the Jewish state. While he longed for peace, he sometimes had to make tough decisions to protect and defend the nation that he loved. He believed that Israel had every right to exist and that the land of Israel was given to the Jewish people by God, but he also believed that the Palestinians could live peacefully side by side with Israel. Peres was without a doubt a peacemaker who was loved and respected both at home and abroad.

As the Jews say, may his memory be a blessing.