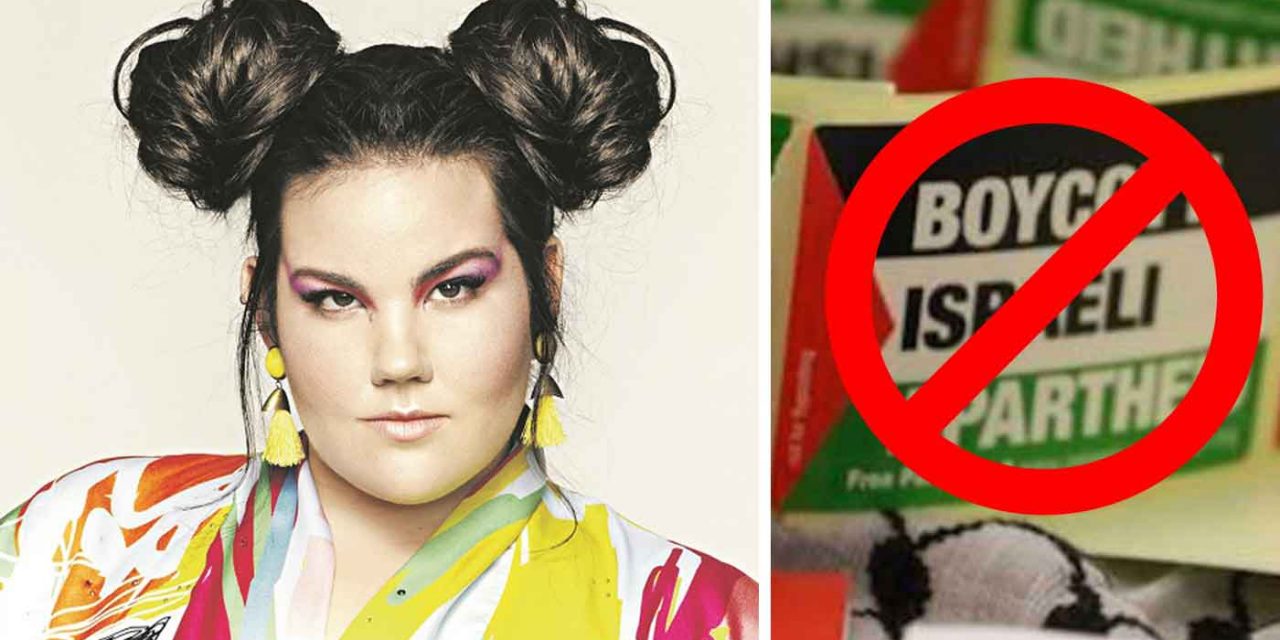 The BBC has dismissed calls to boycott the 2019 Eurovision in Israel after a group of British artists wrote a letter urging them to do so.

The letter, written by anti-Israel activists such as musician Roger Waters, director Ken Loach and designer Vivienne Westwood (along with many people you will never have heard of), was filled with lies, distortions and double standards. It was not designed to stop the BBC from broadcasting the event, it was simply a publicity stunt to spread a hate-filled anti-Israel message. And unfortunately, this stunt has been given far more attention by the media than it deserved.

Fortunately, a BBC spokesperson has dismissed the letter saying Eurovision was “not a political event and does not endorse any political message or campaign”.

The statement said: “The competition has always supported the values of friendship, inclusion, tolerance and diversity and we do not believe it would be appropriate to use the BBC’s participation for political reasons.

“Because of this, we will be taking part in this year’s event. The host country is determined by the rules of the competition, not the BBC.”

The European Broadcasting Union, which organises the contest, added their voice to the controversy, emphasising the “non-political character of the event” and pointed out that preparations in Tel Aviv were already “well advanced”.

There were clearly enough people in Europe who put politics aside, or maybe even showed their support for the country, by voting for Israel to win. Therefore, a small selection of anti-Israel activists and artists should NOT overrule the large amount of support Israel received from the European public.

There was even international media coverage of the effort by hackers to block the phone lines in order to lower the number of votes Israel received. Despite this attempt, Netta won the public vote, so there is no question that Israel deserves to host this year’s event.

Next Year in Tel Aviv

Unfortunately, the 2019 Eurovision competition won’t be held in Jerusalem, Israel’s capital, where it has been held on two previous occasions.

Tel Aviv is arguably a better host city than Jerusalem, it is more modern and is geared up to hosting events like this. This is especially so because Eurovision is being held on the Sabbath where Jerusalem typically closes down for the holy day. It is no less disappointing though that the event is not going to be held in Israel’s capital and it is likely a decision made for political reasons, with the organisers not wanting to upset the Israel haters.

The above attempt by artists to disrupt Israel’s hosting of the Eurovision is not unique or exclusive. Unfortunately, Israel has already been experiencing this. And it is likely to increase as we near the competition.

Last week, Netta made a special appearance during the semi-final of Destination Eurovision, the French television show that selects the country’s contestant for the international singing competition.

Netta had finished performing her song, “Toy,” and the contestants were invited back on the stage. It was at this point that anti-Israel activists jumped on stage and held up signs. They were removed by security within around 30 seconds, but it was clearly distressing to Netta.

The signs, written in French, read: “No to the Eurovision 2019 in Israel.”

An anti-Semitic parody version of Israel’s 2018 Eurovision winning song was broadcast on Dutch TV in May last year, prompting widespread condemnation online as well as an official complaint from the Israeli embassy in the Netherlands.

However, despite the song containing anti-Semitic tropes and Jewish conspiracy theories the producers of the show have defended the song, failing to see the anti-Semitism that is being espoused. Also, Israel haters online are defending this as “legitimate criticism of Israel”.

This is a clear case where those who oppose Israel do not realise that their hatred towards Israel has morphed into anti-Semitism. Below are the English lyrics alongside our explanation of why they are anti-Semitic.

You can also watch the full song with English translations here. The song contains strong language and adult themes.

Posted by Christians United for Israel – UK on Tuesday, 22 May 2018

Below are the English lyrics to the song alongside explanations of their anti-Semitism (contains strong language and adult themes).

Ouch Israel
Look at me, I am a very sweet country
World leaders submissively eat out of my hand
And I extinguish every fire with a kiss.

This is an anti-Semitic conspiracy theory that Jews control the world. Many anti-Semites claim that Israel, the world’s only Jewish state, controls world leaders. This is anti-Semitism pure and simple. It is also untrue, you only need to look at the United Nations to see that the vast majority of countries vote against Israel.

Hey
We’re having a party, will you come along
Later in the al-Aqsa mosque
That will soon be empty anyway
From Haifa to the Red Sea
Are fireworks and kosher satay
So just dance along to my music

There are two points to make about this.

First, the claim that the al-Aqsa mosque “will soon be empty”, is an accusation that Israel is ethnically cleansing the Muslim population of Israel. This is a claim from many an anti-Semite. However, it could not be further from the truth. The Muslim population of Israel continues to thrive. Israel is the only place in the Middle East where Muslims from all walks of life are given the freedom of worship and their religious sites are protected. Even most Islamic nations restrict certain groups of Muslims from worshipping freely. Israel is also the only place in the region where Christians are free to live in peace.

The reference to “kosher satay” is clearly showing the morphing from “Israel” into “Jews” as it is only Jews who follow the kosher diet. And remember, not every Israeli is Jewish.

Is your country bordered by stone throwers?
Then build walls that will even give Trump wet dreams

This is not anti-Semitic, but an inaccurate oversimplification of the situation mixed in with a degrading reference of Trump’s plans to protest US borders.

Israel built a security fence (less than 10% of which is a wall) because of the mass murder of Jews by Palestinian suicide bombers in the early 2000’s during the Second Intifada. As soon as the security fence was completed, the number of Palestinian suicide bombings fell from 73 (killing 293 Israelis and wounding 1,800+ others) down to only a handful in the years following. This has saved the lives of many, many Israeli lives. The security fence around Gaza was used in the recent clashes between Hamas and Israel to stop actual terrorists armed with bombs, knives and guns, not simply “stone throwers”.

Ah-ah, nope, I would not think so
No Palestinian comes in
Ah-ah-ah, not into my territory
I am an unyielding “door bitch”
I am hunting Palestinians
Up the wall
It’s my party
I need to shine here.

To say Israel is “hunting Palestinians”, and the phrase is translated meaning “hunting for sport”, is beyond reprehensible and not true. Israel’s army does all it can to save Palestinian lives whilst the terrorist leaders of Hamas do all they can to destroy Palestinian lives.

Also the claim that “No Palestinian comes in” is also false. Palestinians are allowed to enter Israel as long as it is done legally. Many Arab residents of Israel also identify as “Palestinian”, although polls show that most Israeli-Arabs prefer to be Israeli citizens than Palestinian citizens, even if a Palestinian state was formed.

Is your party crashed by radicals
Open embassies, make sure you cash in
Ching-a-ling in your tin-a-tin!
From your dollar and cents
And wealth, yes
Kerching! Kerching!

One of the most common anti-Semitic tropes throughout history is that Jews are either wealthy or “money grabbers”. The song references the opening of the US Embassy in Jerusalem, something that the majority of Jews (and Americans for that matter) have welcomed. Jerusalem is the capital of Israel and the holiest place for all Jews. These lyrics belittle the Jewish connection to Jerusalem and claim they desire the embassy move only for financial gain, despite it being integral to their beliefs.

The modern state of Israel is 70 years old. When Israel was reborn, the Jews were reestablishing their homeland after 3,000 years. It was a celebration for the Jews around the world. The rebirth of Israel is prophesied in the Bible and the land is promised by God as an everlasting covenant to the Jews. There is an anti-Semitic claim that says that the rebirth of Israel was “illegal”. That Israel “does not belong to the Jews”, that in fact, Jews came and “stole” the land from the indigenous population and have “no history” in the land. This is historically inaccurate as much as it is anti-Semitic.

The song claims that Israel came in and started bombing Palestinians from the start and that they “party” this way throughout their history. This is again a claim of ethnic cleansing. Unfortunately, Israel has been forced to defend itself from the threat of extinction since its birth. Israel has become very good at defending itself. This has lead to a gross distortion carried by anti-Semites that Israel is an oppressor in the region. Israel occupies just 1% of the Middle East, is the only Jewish country in the world and the only country that is threatened with extinction.

I’m a very sweet country
The whole world is still eating well from my hand
Isn’t that beautiful?
I think that’s beautiful!
**** up
Beautiful

Again the notion that the “whole world is still eating well from my hand” is another anti-Semitic claim of “Jewish control” over the world. This is something that no other country is accused of. It is also laughable when you think how the United Nations treats Israel where almost every country in the world votes against Israel, even on historical facts such as the Jewish history in Jerusalem.

So there you have it, anti-Semitism masquerading as “criticism of Israel” and being broadcast on prime-time television in a Western democracy without apology… outrageous!