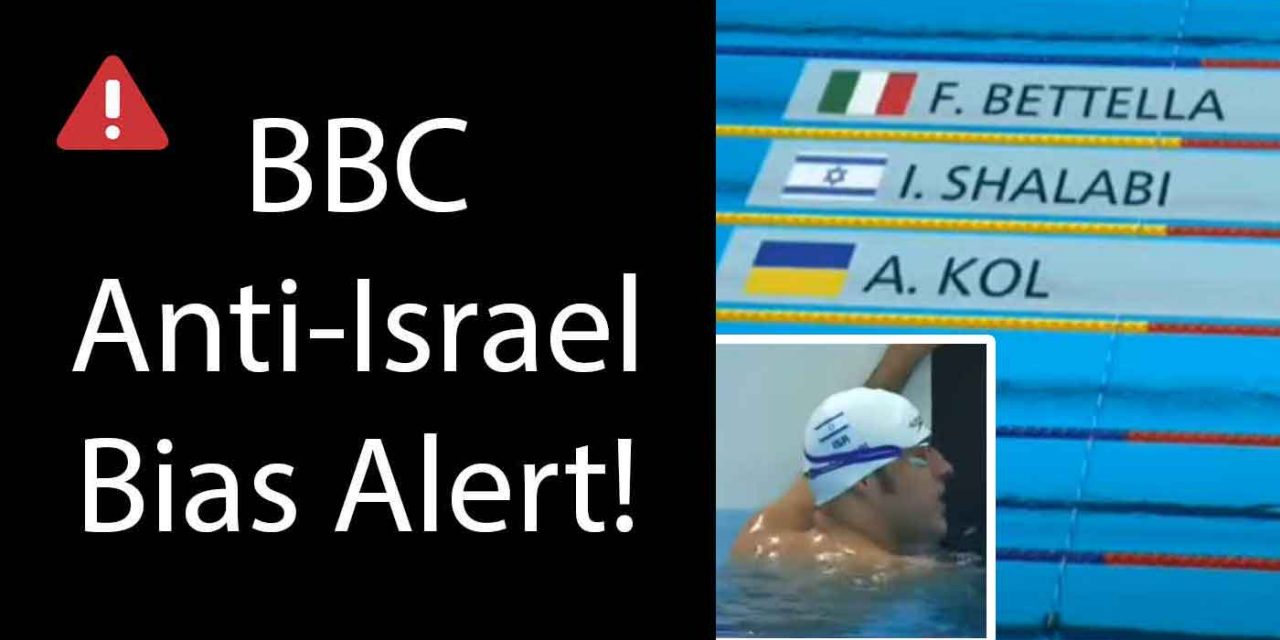 The BBC is guilty of showing shameful anti-Israel bias in its coverage of the Toyko Paralympics 2020, refusing to acknowledge an Israeli-Arab as the first Arab to win a gold medal at the Games.

This is a fact and cannot be changed. Despite this, BBC Arabic refused to acknowledge the Israeli as an Arab, simply because of his nationality.

Instead, BBC Arabic incorrectly reported in a video broadcast that Jordanian weightlifter Omar Qaradah was “the first Arab with special needs to win a gold medal at the Tokyo Paralympic Games”.

Qaradah won his gold medal the day after the Israeli.

This same omission was published in a BBC Arabic article titled “The most distinguished Arabs who grabbed the spotlight at the Paralympic Games in Tokyo,” in which Shalabi was not even mentioned.

BBC Arabic’s false claim was repeated a number of times including on the BBC’s Tokyo Roundup, with the Jordanian listed as the “first Arab” to win a medal at the Tokyo Paralympics.

It should be pointed out that the BBC previously apologised for bias in the same show, after fawning coverage of a terrorist who masterminded the killing of 15 Israelis in 2001.

The lie was published twice more on the BBC Arabic’s Trending show and again on its YouTube channel.

The mistakes were highlighted to the BBC by CAMERA (Committee for Accuracy in Middle East Reporting and Analysis) who issued a complaint to the BBC. This complaint prompted the BBC to action, but not in a good way.

Shamefully, the BBC decided to ‘fix’ the article by still refusing to acknowledge the Israeli-Arab’s achievement.

The article was changed to say that Qaarah was the “first delegate of an Arab country” to win a gold medal instead of calling him the “first Arab”. They did this to continue avoiding recognition of an Israeli-Arab being the first Arab to obtain a gold medal at the Tokyo Paralympics.

To put it simply, this is pure discrimination against the UK’s ally Israel and shows disgraceful behaviour from the BBC.

The BBC is the national broadcaster of the United Kingdom and is supposed to act with integrity and uphold the values of the British government.

Established under a royal charter and operating under its agreement with Her Majesty’s government representative, the BBC must adhere to the same rules as its UK broadcasts.

“The BBC must ensure that the World Service maintains high standards of editorial integrity and programme content and quality, having regard, to the extent that the Trust considers them relevant to the circumstances of the World Service, to the particular requirements that apply to the UK Public Services.”

It also states that the BBC must agree with the Foreign Secretary to provide “an accurate, unbiased and independent news service covering international and national developments”.

Therefore, BBC broadcasts outside the UK should not be influenced by individual writers and producers and should not be dictated by the foreign policy or views of any other country.

A CAMERA Arabic spokesman said that “while the inaccuracy may seem small, the BBC’s reluctance to even mention or count an Arab Israeli athlete’s victory prevents its Arabic-speaking audience from knowing that Israel was represented by an Arab at all. In fact, he won gold for Israel.”

“It’s a method of denying normalisation between Israel and Arab states.”