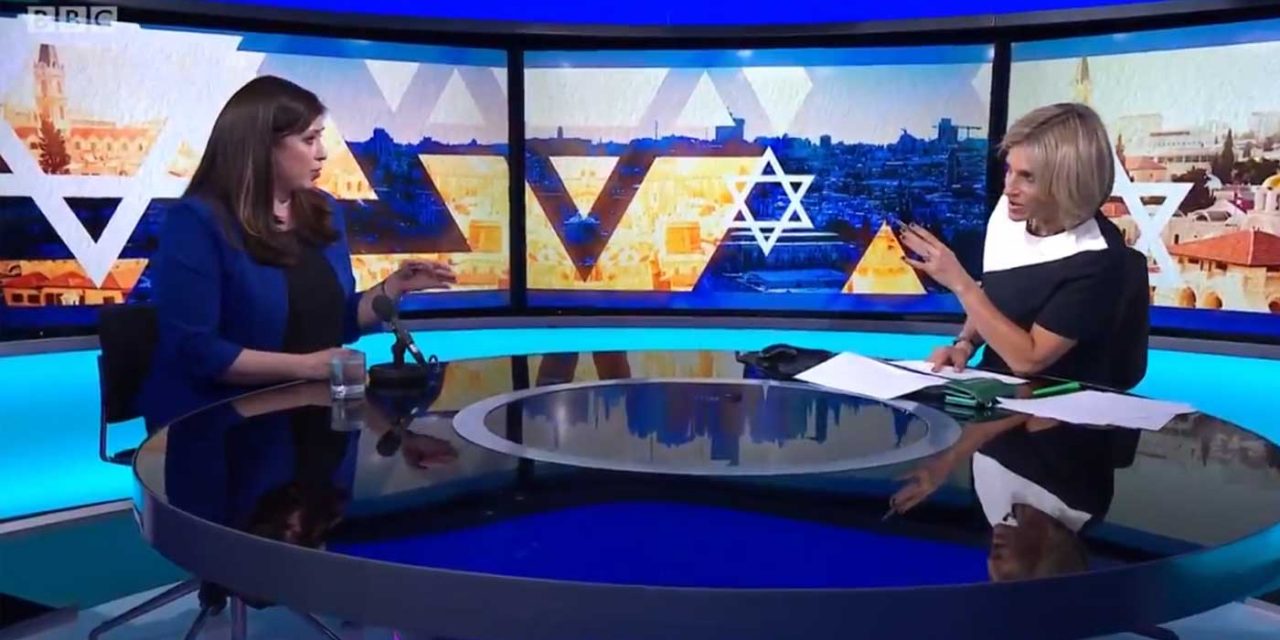 The BBC has admitted it got its figures wrong when presenter Emily Maitlis accused Israel of not providing vaccines to its Arab population despite this being a complete falsehood.

In April, during a BBC Two Newsnight programme broadcast, Emily Maitlis said during a hostile conversation with Israel’s Ambassador to the UK, Tzipi Hotovely, that “in Israel, the Palestinian population has not been inoculated at anywhere near the rate of the Israeli population.”

Maitlis added that “the roll-out to Palestinian citizens has been much slower at 0.5 per cent and that’s led to criticism that a passport scheme will widen a political divide already hurting many in that country.”

This was a shocking accusation as at the time Israel’s Arab population (sometimes referred to as Palestinians living in Israel) were given equal opportunity along with its Jewish citizens and the vaccine rate at that time was much, much higher than the 0.5% claimed.

According to media watchdog, the Committee for Accuracy In Middle East Reporting (CAMERA), at the time “Maitlis did not clarify what she meant by the Palestinian population but if she was referring to Israeli Arabs – as her use of the words ‘in Israel’ would suggest – the claim that that sector ‘has not been inoculated at anywhere near the rate of the Israeli population’ is inaccurate and misleading.

“All sectors of the Israeli population over the age of 16 have been offered the vaccine equally and while uptake was initially lower in some sectors – including among Israeli Arabs – the rates have recently improved.”

The BBC admitted it got the figures wrong after viewer Stephen Franklin complained that the figure of “0.5 per cent” conflated the vaccination rates for Israel’s Palestinian citizens and Palestinians in the occupied territories.

The BBC acknowledged “you are right to say that we got our sums wrong – unfortunately we conflated the vaccination rate for Israeli Arabs (where there was, as you say, some reluctance to have the jab) and the very low rate for Palestinians living in the West Bank and Gaza where Israel was not vaccinating the population. […] We also agree we should have been clear about the issue of vaccine hesitancy.”

After admitting the figure of 0.5 per cent was not accurate, the BBC also issued a correction on its website.

In April, at the time of the interview, Israel led the world in vaccination rates and was getting a lot of positive media attention as a result. Anti-Israel groups tried to change this outlook and instead started spreading false information in order to delegitimize Israel.

Unfortunately, it worked. Too many news outlets took the opportunity to smear Israel even though it was based on false information.

In fact, the 0.5% Maitlis (and other groups) referred to was the Palestinian population living in Judea and Samaria (the West Bank) where Israel does not have full jurisdiction and where the Palestinian Authority (PA) which controls those areas expressly stopped Israel from getting involved in the vaccine rollout.

During the interview with Maitlis, Ambassador Hotovely fact-checked the BBC host and pushed back against her hostile approach.

Ambassador Hotovely said: “Let’s make a fact check. The Palestinians asked to run their own programme of vaccination. I think sometimes there is a little bit of misunderstanding of their responsibility because according to all international agreements their health authorities should take care of the Palestinian population.”

The BBC previously admitted its mistake on this issue also when it confirmed Israel has “no legal obligation” and issued a clarification that the responsibility for vaccinating Palestinians does indeed lie with the Palestinian Authority.

Despite Israel having no involvement in the vaccine rollout in the Palestinian Territories, the Jewish state still vaccinated hundreds of thousands of Palestinians for free.

The Palestinians rejected these vaccines and claimed they were not good enough despite the fact they were the exact same vaccines as the ones Israel was giving to its own population. Pfizer also deemed the vaccines safe.

These vaccines did not go to waste as South Korea instead accepted the vaccines and safely used them to protect their own people.

To their shame, the PA attempted to smear Israel and score political points over its neighbour instead of helping its vulnerable citizens.