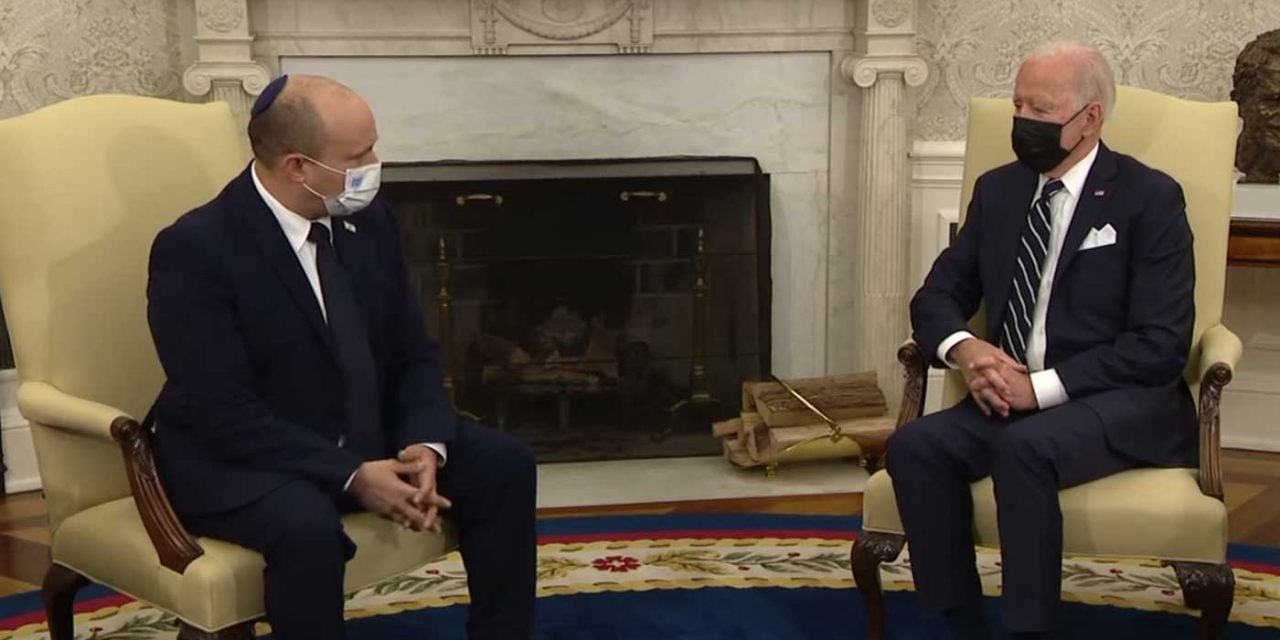 Israel’s Prime Minister Naftali Bennett travelled to the United States this week to meet with top US officials including President Joe Biden.

At the top of the agenda was Iran and how the two countries would deal with the regime now that a return to the Iran Nuclear Deal (JCPOA) seemed unlikely. They also discussed Israel’s security and also the COVID vaccine programme, in particular Israel’s success with booster shots.

A one-on-one private meeting between the two in the White House dining room ran for 50 minutes, running over the scheduled 25 minutes.

The leaders emerged from the meeting and gave statements to the press in the Oval Office.

The US President stated that he prefers the diplomatic route to prevent Iran from acquiring nuclear weapons, but if that fails, the US is willing to consider “other options” to ensure Iran “never” gets the bomb.

Biden started his remarks with the recent terror attack in Afghanistan: “Our hearts go out to all those we’ve lost… The mission… has come with a significant loss of American personnel,” he said. “We will complete the mission.”

Biden said that it was “great” to have Prime Minister Bennett visit him, adding, “We’ve become close friends… He heads and leads the most diverse government in Israeli history.”

“We’ve got a big agenda today — starting with the COVID… [discussing] both our successful vaccination programs… We’re considering advice you’ve given that we should start earlier [with booster shots].”

Moving to regional matters, Biden said, “We’re also going to discuss.. the unwavering commitment that we have in the United States to Israel’s security.”

On Iran, Biden said: “We’re also going to discuss the threat from Iran and our commitment to ensure Iran never develops a nuclear weapon. But we’re putting diplomacy first and we’ll see where that takes us. But if diplomacy fails, we’re ready to turn to other options.”

Biden also spoke about the peace Israel is seeing with its neighbours through the Abraham Accords. Biden said the US will support Israel’s development of deeper ties with its Arab and Muslim neighbours and the world generally.

“We’re also going to discuss ways to advance peace and security and security for Israelis and Palestinians,” he added.

Biden concluded by thanking Prime Minister Bennett for coming and said “The US will always be there for Israel. It’s an unshakeable partnership between our two nations.”

“I’ve known every Israeli prime minister since Golda Meir, gotten to know them fairly well, and I look forward to establishing a strong personal relationship with you,” Biden said.

Israel’s Prime Minister explained in his remarks that the main focus of their private discussion and the future meetings leaders of the two countries were going to have later in the day were focused on Iran’s nuclear weapons. Bennett expressed his appreciation for Biden’s words.

“I was happy to hear your clear words that Iran will never be able to acquire a nuclear weapon and that you emphasize that they’ll try the diplomatic route,” Bennett said. “But there’s other options if that doesn’t work out.”

“These very days illustrate what the world would look like if a radical Islamic regime acquired a nuclear weapon, that that marriage would be a nuclear nightmare for the entire world,” Bennett said in reference to the recent attacks in Afghanistan.

“Iran is the world’s number one exporter of terror, instability and human rights violations. And as we sit here right now, the Iranians are spinning their centrifuges… We’ve got to stop it.”

The Israeli Prime Minister said he will present Israel’s two pronged plan for dealing with Iran that will address its nuclear aggression and also “permanently keep Iran away from ever being able to break out the nuclear weapon.”

Bennett assured Biden that he will never ask the US to send troops to defend Israel. “That’s our job. We will never outsource our security,” he said.

“But we do thank you for the tools and the back you’ve been giving us and you’re giving us,” he added.

Israel’s Prime Minister reported that his country is seeing success with COVID boosters.

“You were the first to call the pandemic the ‘pandemic of the unvaccinated,’ and that could not be more true,” Bennett said.

He noted the “tough decision” he made last month to pioneer the distribution of a third booster shot for Israelis.

“I can report to you, Mr. President, and to everyone that we’ve reached almost three million Israelis that have received the booster shot. And the bottom line is, it’s safe and it works,” he said.

“The good news, finally, is that the tide is turning in Israel,” he says.

Bennett ended his remarks by quoting the Bible.

“Lift up thine eyes round about and behold: all these gather themselves together, and come to thee. As I live, saith the LORD, thou shalt surely clothe thee with them all as with an ornament, and gird thyself with them, like a bride,” Bennett said in Hebrew.

“What this means is the sons and daughters of the Jewish people are going to come back to our land, are going to nurse our ancient land and rebuild this. And this ancient Jewish prophecy is today Israel’s reality, and it’s a miracle that you’ve been so central and so part of it for so many years,” Bennett said.

“So, Mr. President, today…you and I are going to write yet another chapter in the beautiful story of the friendship between our two nations, the United States of America and the Jewish and democratic State of Israel.”

“Both of us who seek to do good and need to be strong, both of us who are lighthouses in a very, very stormy world,” he said.

“Thank you, Mr. President. I look forward to working with you now and for many years forward,” Bennett concluded.