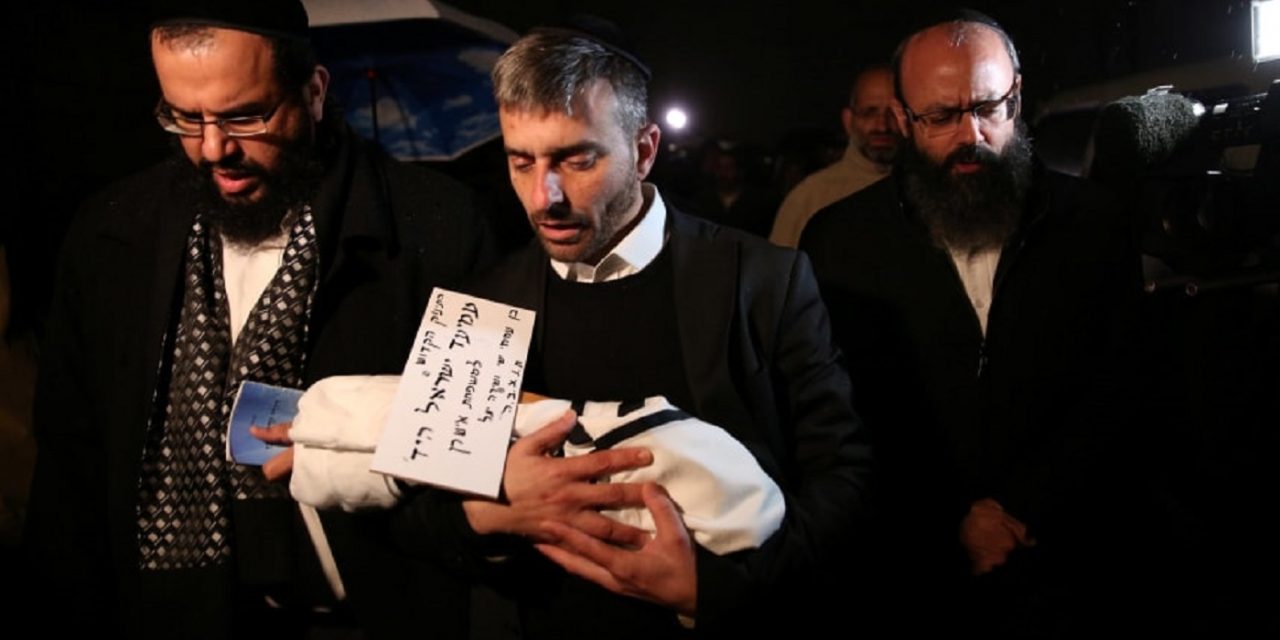 Several hundred people attended the Mount of Olives funeral of the baby boy, who was born prematurely after the terror attack shooting that critically wounded his mother and several others.

In his eulogy, Rabbi Raphael Ish-Ran, the grandfather of the baby, announced his name as Amiad Yisrael and explained that it meant the Jewish people would be in the Land of Israel forever.

“It is written in Halakha that a name must be given to the baby, so your parents have given a name, which is of great significance and symbolizes everything – Amiad Yisrael,

“Don’t be confused, we are crying, but we are strong,” he said.

Amiad Yisrael was born prematurely as a result of Sunday’s terrorist attack near Ofra and died on Wednesday evening. After his delivery in an emergency C-section, doctors in Jerusalem’s Shaare Zedek Medical Center fought unsuccessfully to save his live for 72 hours.

Chaim Silverstein, the grandfather of Amiad Yisrael Ish-Ran, the baby who was murdered in to a Palestinian terror attack, delivers a gut wrenching eulogy as baby Amiad Yisrael is laid to rest.Amiad Yisrael was born prematurely Sunday in an emergency c-section due to the injuries sustained by his mother in the terror attack. He survived 4 days before passing away today in an unimaginable tragedy.May Amiad's memory be a blessing, may his family know no further suffering.

Posted by StandWithUs on Wednesday, 12 December 2018

Earlier in the day, the baby’s parents, Shira and Amichai Ish-ran – hospitalized themselves for injuries sustained in the attack – visited the baby for the first and last time.

Prime Minister Benjamin Netanyahu said: ”Our hearts are with Shira and Amichai.”

President Reuven Rivlin called the parents “true heroes,” and posted a poem, “The parable of the fledgling” by Eli Eliyahu, about a baby bird that falls from his nest and cannot be rescued.

“We are with you, embracing you, and will not rest until this despicable terrorism is uprooted,” he said.