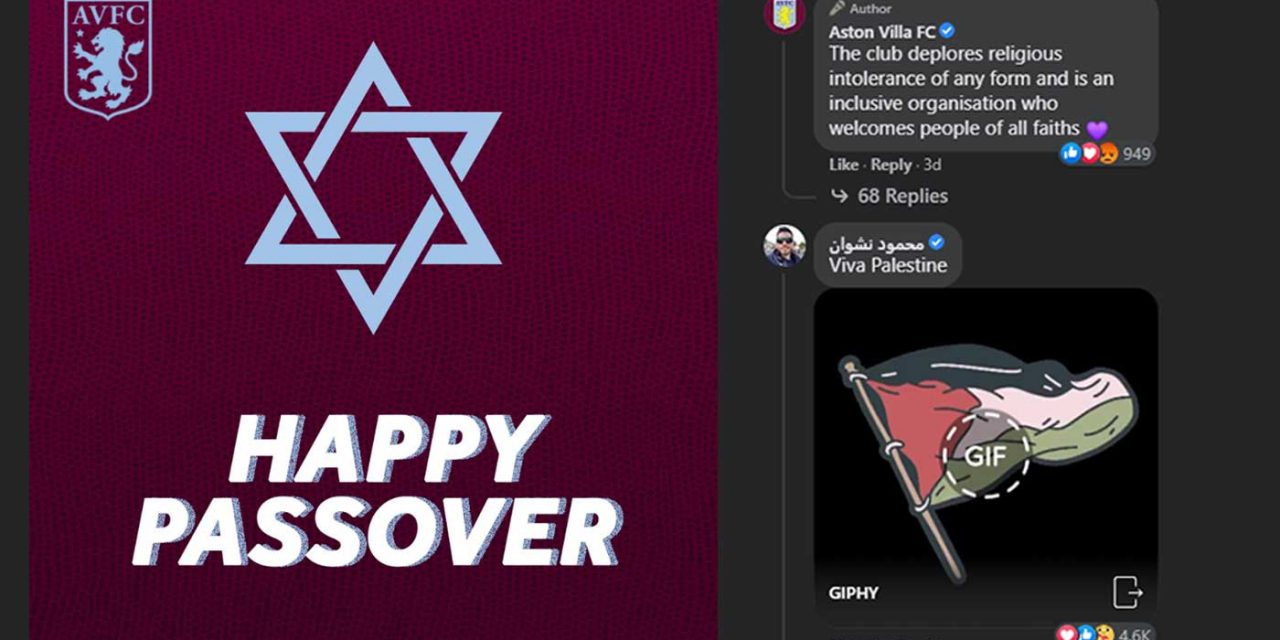 An innocent post from Aston Villa football club wishing their Jewish fans a “Happy Passover” has been inundated with hatred against Jews and Israel prompting the club to condemn the anti-Semitism.

The post simply says “Happy Passover” with a claret background and a light-blue Star of David, a Jewish symbol.

It appears that this Jewish symbol is what is causing the anger and unfortunately now the post has been hijacked by anti-Israel haters with the vast majority of the people who have reacted to the post being in the Middle East, particularly Egypt.

Some fans are speculating that this is a “coordinated campaign” of hatred rather than it being Aston Villa fans reacting.

Currently, the post has 35,000 reactions, over 27,000 of those reactions are “angry” according to Facebook’s emoticons. Furthermore, there are posts that say anti-Israel things which have as many “likes” than the club’s post itself.

A post that simply says “Viva Palestine” with the Palestinian flag has 4,600+ positive reactions.

Sadly, even Jewish fans of Aston Villa who are responding to the club with appreciation are being attacked not because of Israel but because of their faith. It is a sad situation and highlights the deep hatred against Israel seen in parts of the world.

In contrast, Aston Villa posted a message for the Hindu festival of Holi with a similar design saying “Happy Holi” and that post has an overwhelmingly positive response. It is a clear sign of anti-Semitism being expressed.

Aston Villa put out a short statement on the Facebook post saying, “The club deplores religious intolerance of any form and is an inclusive organisation who welcomes people of all faiths.”