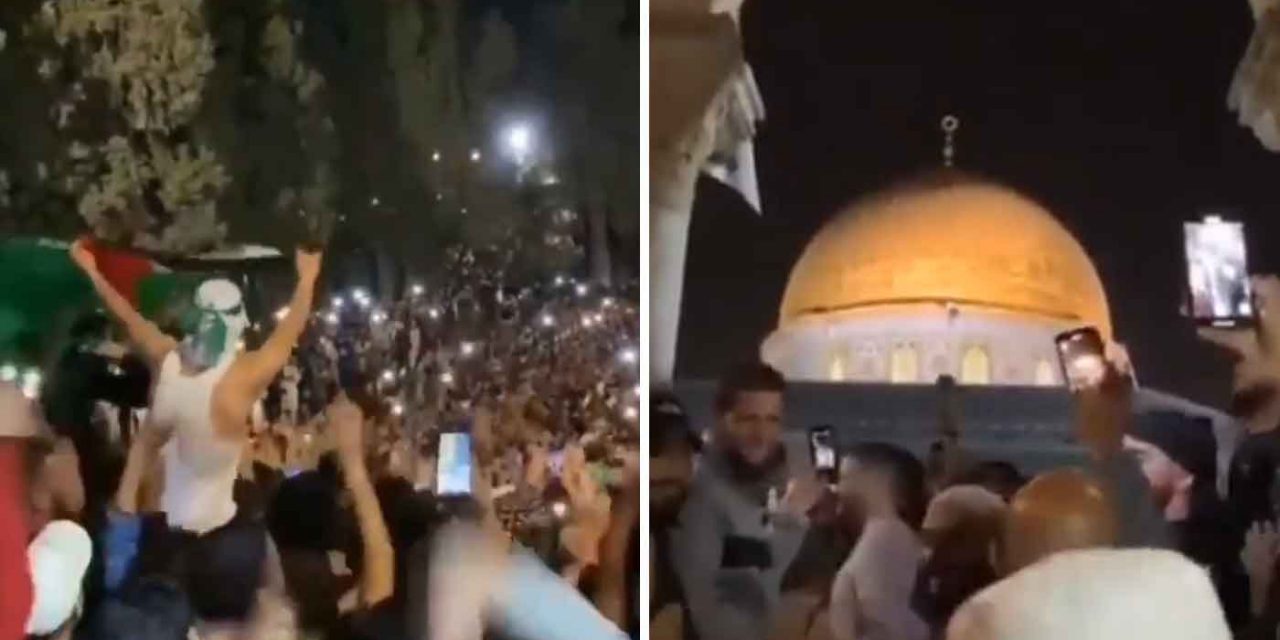 This week, as the Jewish people honoured the memory of the six million Jews who were murdered in the Holocaust, some among the thousands of Muslims gathered on the Temple Mount chanted about murdering Jews.

It is a timely reminder that the antisemitism of the Nazis did not die with Hitler.

The video below shows thousands gathered upon the Temple Mount. Portions of the crowd chant “Khaybar Khaybar, ya yahud, Jaish Muhammad, sa yahud,” which means, “Jews, remember Khaybar, the army of Muhammad is returning.”

Khaybar speaks of the city where, during the time of Mohammed, Muslims persecuted the Jews and murdered Jews. In Islamic tradition, the chant is used as a battle cry when attacking Jews or Israelis.

Throughout history, empires after empires tried to destroy the Jewish nation – and only destroyed themselves. Shame on the radical Palestinians. #YomHaShoah pic.twitter.com/l2dj6bjAaO

The flag of the Hamas terror group was also flown on the Temple Mount with another chant, “We are the men of Muhammed Deif,” referring to the notorious head of Hamas’s military wing. Hamas is an outlawed terror group and Deif is wanted by Israel for orchestrating suicide bombings, killings and kidnappings.

More than this, Palestinian rioters have tried to harm Jews who are praying at the Western Wall. Just this morning a rock was thrown from the Temple Mount complex down into the area of the Western Wall where Jews pray. Anyone who has been to the Western Wall will know how high those walls are and how much damage a single stone could do if it hits someone. Mercifully, the rock missed those praying, but it is these acts of terrorism which prompt Israeli forces to enter the Temple Mount complex – they are trying to save lives.

Extremist Islamists have been using the Temple Mount during Ramadan to spark violent confrontations with Israeli forces. Israel’s police have valiantly defended the holy sites, but the unrest has caused Israeli authorities to temporarily ban Jewish entry onto the Temple Mount.

Israel, on the other hand, has been in a sombre mood this week as it commemorates the Holocaust. Yom HaShoah is a time of national remembrance for the victims of the Holocaust.

During the Holocaust, six million Jewish men, women and children were brutally and systematically murdered by the Nazis. It is the largest genocide in history.

Hatred towards Jews continues today. Instead of indefensible Jews being persecuted as minorities in various countries around the world, now antisemites direct their hatred toward the Jewish state – Israel. This is why it is important to understand what is happening on the ground with Israel.

God promised the land of Israel to the Jewish people. That includes the whole of Jerusalem and all of Judaism’s holy sites. Jews pray to Jerusalem. They are commanded by God to go up to Jerusalem on special occasions each year. However, today, Jews are not allowed to worship on the Temple Mount, right now they are not even allowed to visit because of Palestinian violence against Jews. While Jews commemorate the largest genocide against them, they had to endure cries of “Death to Jews” from their holiest site from the extremists who perpetrate the same antisemitic hatred of the Nazis. We cannot think of a worse insult than that.

Let’s continue to pray for the peace of Jerusalem. This is what God wants, for the Jewish capital to live up to its name as the ‘City of Peace’. We long for the day when Jews will be free from persecution, harassment and discrimination in their own capital city.