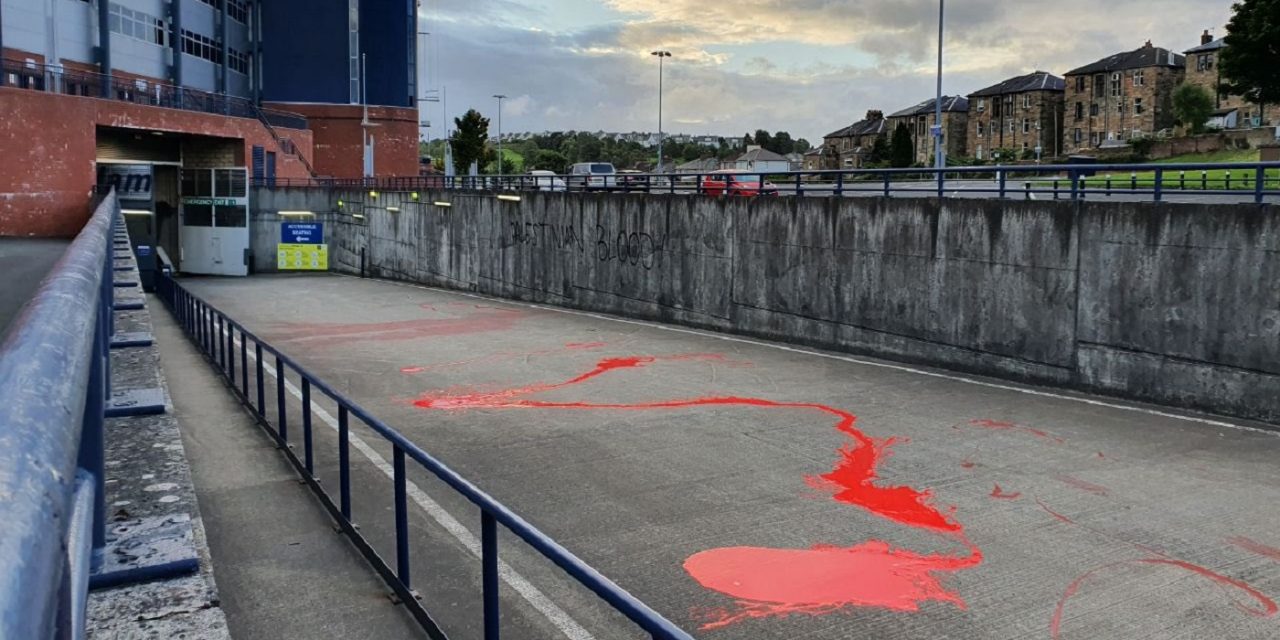 Pro-Palestinian activists used red paint to cover the ramp that the Israeli football team’s bus was due to take before its match against Scotland in Glasgow last Friday.

The disgraceful act of vandalism, which drew upon anti-Semitic blood libel, was accompanied by the words “Palestinian Blood!” and “Free Gaza” written across the wall, according to pictures shared on Twitter.

Scenes outside Hampden ahead of #scotland v #israel pic.twitter.com/Mobnl8DTsY

Investigative blogger, David Collier, pointed out that the press reported the demo as being about human rights, but photos from the protest suggest differently.

Collier points out that protesters flew Iranian flags. Sympathisers of the new IRA group also turned up to protest – demanding the release of people recently arrested on terrorism charges.

Among the demo was Labour councillor Baillie Hanif Raja

The Israeli team who played at Scotland contained several Israeli Arabs. The goal was from a quick 1-2 between Eran Zahavi and Moanes Dabour. Dabour is an Israeli Muslim.

None of this mattered to the haters and antisemites protesting outside the ground.

Meanwhile, a Palestinian flag was flown above one of Ayr’s biggest schools after a “major security breach”.

Speaking after the school incident, Ayr West councillor Martin Dowey, said: “I have been contacted by a number of concerned residents throughout the day who have been asking how this was able to happen.

“It is a hugely concerning security breach at one of our primary schools and will clearly need investigating as a matter of urgency.”

The path of the Israeli football team’s bus has been painted blood red by activists in Glasgow ahead of tonight’s Nations League game against Scotland. pic.twitter.com/CTalnsvyTd