Amnesty International shows its anti-Israel bias; condemns Israel but not the terrorists 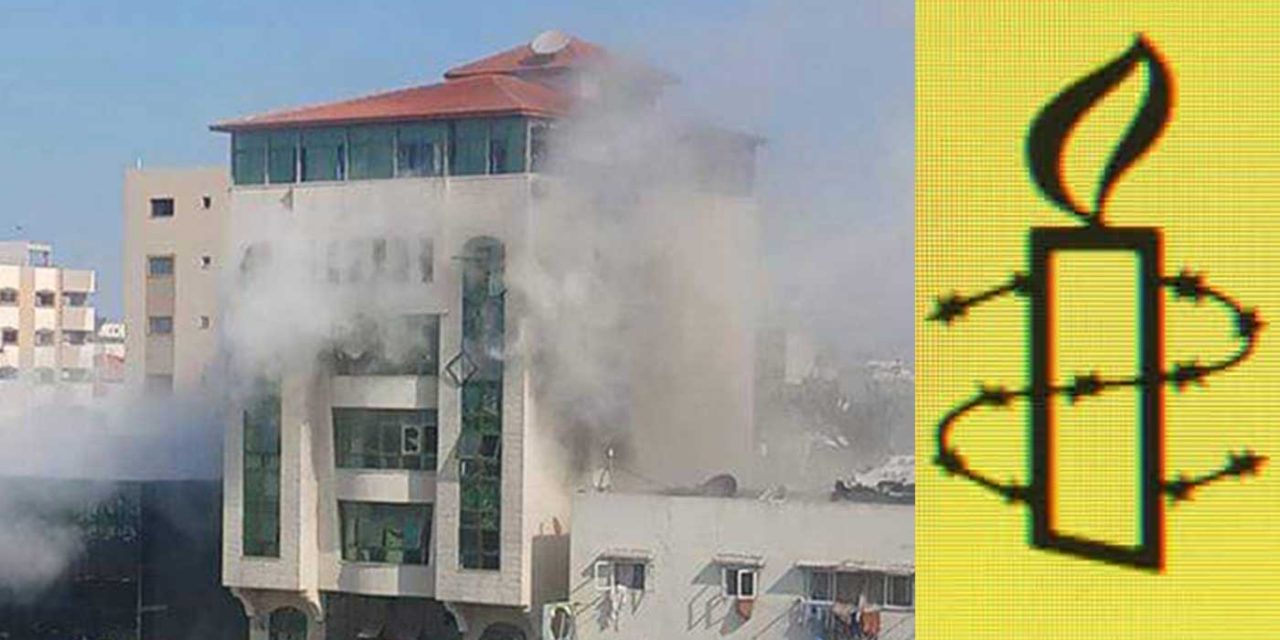 The human rights charity Amnesty International has once again shown its anti-Israel bias after it condemned Israel for an attack it didn’t commit. After realising their mistake, Amnesty then failed to condemn the terrorists showing once again it is more concerned with anti-Israel propaganda than it is about defending human rights.

Yesterday during the onslaught of rockets by Palestinian Islamic Jihad (PIJ) terrorist in Gaza. The terrorists accidentally misfired a rocket and hit a high-rise building in Gaza city.

Ironically the building they hit happened to be the office of the Palestinian Human Rights Commission.

Anti-Israel activists used the attack to spread hatred against Israel. Accusing Israel of “war crimes” for “targeting civilians”. This was a lie and fake news. They spread this intentionally because they knew the truth.

Amnesty jumped on this bandwagon and tweeted: 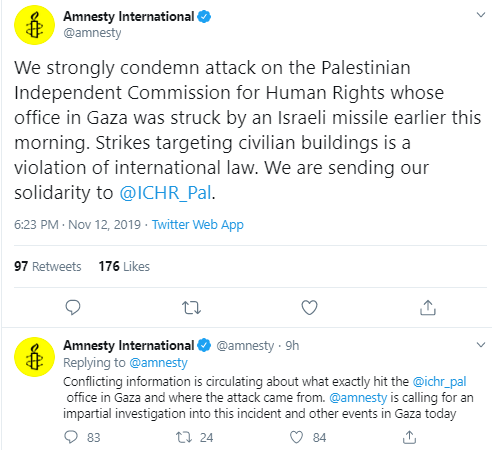 “We strongly condemn attack on the Palestinian Independent Commission for Human Rights whose office in Gaza was struck by an Israeli missile earlier this morning. Strikes targeting civilian buildings is a violation of international law. We are sending our solidarity to @ICHR_Pal.”

A Fox News reporter who is in Gaza City and filmed a report outside the still smoking building after it had been struck, was one of the many people who pointed out to Amnesty that it was, in fact, a terrorist rocket from inside Gaza that struck the building. Even Haaretz explained how it was a Palestinian rocket simply because of the media blackout in Gaza and the spreading of the truth through word of mouth rather than media sources.

When Amnesty was told that the attack was actually from Palestinian terrorists, they tweeted this:

“Conflicting information is circulating about what exactly hit the @ichr_pal office in Gaza and where the attack came from. @amnesty is calling for an impartial investigation into this incident and other events in Gaza today.”

You will notice that when Israel was to blame, Amnesty condemned it. When the terrorists were at fault, Amnesty refused to condemn them.

Amnesty International is supposed to be a “human rights” charity that supports “peace”. It is bizarre that so called “peace activists” only blame Israel and give a free pass to Palestinian terrorists. Real peace activists will call out the faults on both sides and do everything they can to protect the human rights of all civilians.

So far, 40 Israelis have been injured, two wounded directly by rocket fire; 23 lightly injured and another 23 hospitalised with anxiety and other stress symptoms. An 8 year-old-girl is in a serious condition after suffering a heart attack caused by anxiety while hiding in a bomb shelter.

Amnesty is absolutely right when they say this attack was a “violation of international law”. But they were completely wrong to blame and condemn Israel.

We are waiting for apologies for leading the public astray by your wrongful accusations and misinformation regarding the attack on the Palestinian Comission for Human Rights @AmnestyUK https://t.co/GcJin8jKoh

Now they must condemn each and every terrorist rocket fired by Hamas and Palestinian Islamic Jihad against Israeli civilians. Because each one of these is a crime against humanity and places civilian lives at risk both in Gaza and in Israel.

Sadly, Amnesty and so many other “human rights” groups will remain silent when Israel is attacked by terrorists. And the media will continue to not report on terrorists hurting their own people. These stances work against human rights, endanger lives on both sides and serve the anti-Semitic cause of the terrorists who seek Israel’s destruction.