30,000+ people sign petition calling for Iceland to be disqualified from Eurovision in 2020 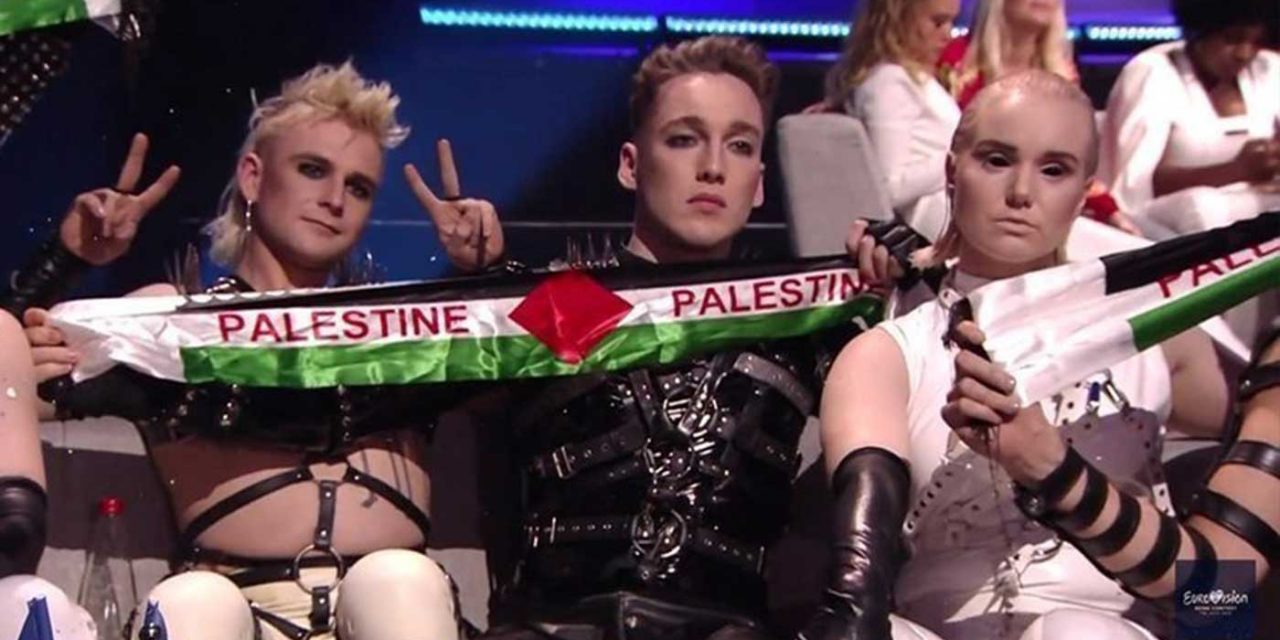 A petition calling for Iceland to be disqualified for the 2020 Eurovision is picking up steam with more than 33,000 people signing it within hours of it going live.

Israel hosted the Eurovision Song Contest 2019 over the weekend. Iceland’s entry, Hatari, violated the contests rules when they held up “Palestine” flags in a political protest at the announcement of their scores during the final whilst they were live on TV.

A petition was started yesterday evening and has been gathering signatures, more than 33,000 in 16-hours so far.

“After a wonderful night about overcoming differences and being united in music, the group who represented Iceland acted with great disrespect towards the atmosphere and the host country by holding Palestinian flags up during the live broadcast. After such a terrible display of contempt for Israel, we the undersigned request that Iceland is disqualified from entering next year’s Eurovision.”

“The banners were quickly removed and the consequences of this action will be discussed by the Reference Group (the contest’s executive board) after the contest.”

The rulebook states that artists may not promote any political cause at Eurovision, with disqualification being threatened.

Eurovision organisers had feared Hatari would make some kind of on-stage protest. The band instead opted to display a Palestinian banner during the voting section of the contest at the very end.  Their pathetic attempt to disrupt Eurovision was about as successful as their performance. Not even BDS movement themselves, which leads boycotts of Israel, approved of the Icelandic protest because of their decision to perform there.

Interestingly, an anti-Israel petition launched on Sunday is struggling to reach above 6,000 signatures even though it has had two days longer. The petition calls for Israel to be banned “indefinitely”, simply because organisers confiscated the Palestinian flags from the Icelandic delegation after their protest.

However, this is a good example of the hysterics and hypocrisy of anti-Israel activists.

Let’s put this in perspective for a moment. Even if Eurovision wasn’t the one enforcing the ban on Palestinian flags, it would be an extreme measure to ban an entire country from competing in Eurovision, ever again, simply because one individual from that country (who wasn’t even seen on TV) confiscated a flag.

To be clear. The flags were banned by Eurovision. The Icelandic group were warned not to make any political statements by Eurovision. They broke the rules live on TV. Israeli staff carried out their duties in accordance with Eurovision’s rules. Israel did nothing wrong.

Sadly, this is how absurd the mind of an Israel hater is. By this same logic, does this mean that if a staff member in the Netherlands says a bad word to one of the performers at next year’s Eurovision, then the Netherlands should be banned from the competition forever? Of course not.

Those who are calling for Israel’s complete removal from the competition are holding Israel to a much higher standard than any other country (which is anti-Semitism) and using any possible opportunity to demonise Israel.

The petition on Iceland is different, however, as Eurovision organisers have already said that Iceland will be reprimanded. Their act was representing their country, was live on TV and made a political statement against the host country after being repeatedly warned by Eurovision not to make the statement. The banning of Iceland for next yearscompetition could be too extreme an ask for some or perfect justice to others.

If you would like to get involved in the petition (which has no association to CUFI) please click here.