20,000 sign petition calling for BAN of Al-Quds march in London 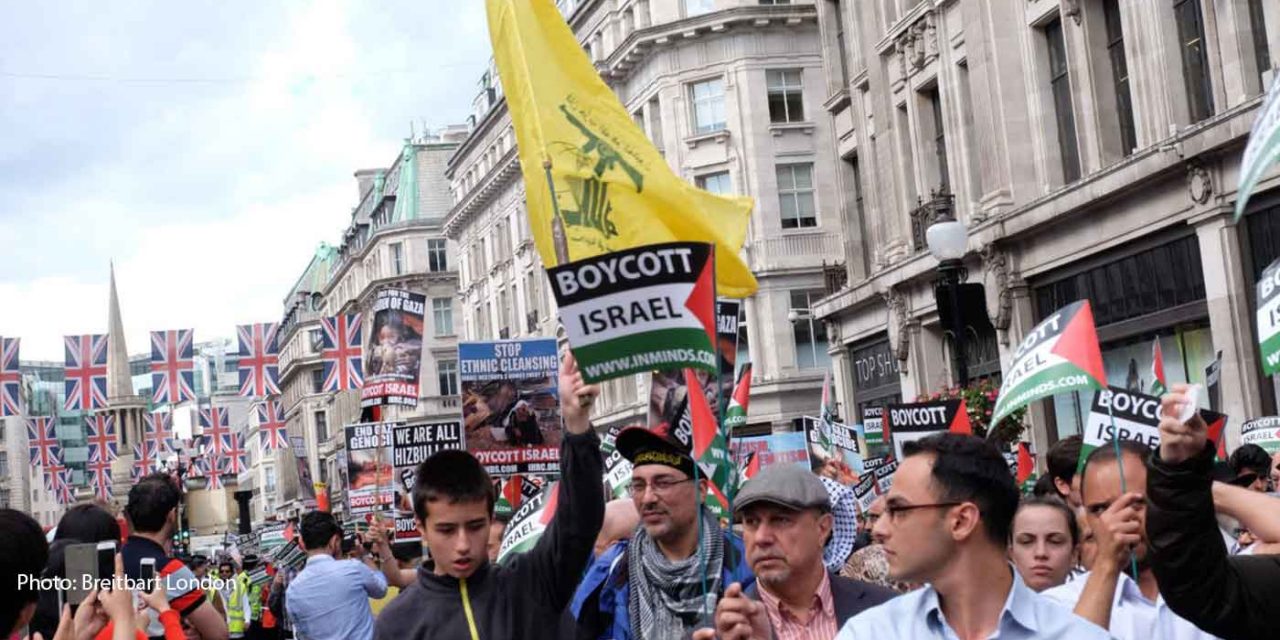 More than 20,000 people from around the UK have signed a petition calling on Sadiq Khan to ban the anti-Israel Al Quds march due to take place this Sunday (18 June).

Al Quds day (Jerusalem Day) will be marked around the world on the last Friday of Ramadan. In London, however, the Al Quds march is set to take place on Sunday 18 June.

Not only does this march call for Israel’s destruction, but flags of the terrorist organisation Hezbollah are expected to be flown by supporters as they did last year. This year organisers are actively encouraging it. This is something that should not be allowed on the streets of Britain.

CUFI supporters have previously written to London Mayor Sadiq Khan to ban the Hezbollah flag from being flown at the Al Quds day march, which has been rejected by the London Mayor’s office.

This petition, however, calls upon Sadiq Khan to ban the event entirely. Because the march is anti-Semitic, anti-Israel (the events main purpose is to call for the destruction of Israel) and causes great distress to Britain’s Jewish community.

The petition, started by our friends at North West Friends of Israel, titled, “BAN The Extremist, Terrorist Supporting Al Quds March In London On June 18th”, has gathered more than 20,000 signatures at the time of writing this article.

Related Posts:
10 things you need to know about Hezbollah ahead of London’s anti-Israel march

The full wording of the petition is as follows:

The Al Quds Day March is scheduled to be held in London on 18 June 2017. Previous Al Quds Day marches have seen displays of support for Hezbollah, an illegal, proscribed, antisemitic terrorist organisation. This has caused great distress to the Jewish Community. Al Quds Day is an annual day chosen by the late Ayatollah Khomeini to call for Israel to be destroyed.

“The Quds Day is not merely a strategic solution for the Palestinian problem, …. any freedom lover and justice seeker in the world must do its best for the annihilation of the Zionist regime.”

Additionally, Hezbollah is currently massacring Syrian civilians on behalf of the Assad regime.

Last year, on Sunday 3 July 2016, Hezbollah flags were carried and waved by participants in the Al Quds Day March. There were also placards with the words “We Are All Hezbollah”.

Then Home Secretary, Theresa May, gave clear guidance on hate crime to all polices forces that makes specific mention of antisemitism and confirmed that holding Hezbollah flags is a criminal offence in accordance with Section 13 of the Terrorism Act 2000. The act states that people who ‘wear clothing or carry or display articles in public in such a way or in such circumstances as arouse reasonable suspicion that an individual is a member or supporter of the proscribed organisation are guilty of a criminal offence.” Hezbollah’s External Security Organisation was proscribed in March 2001 and in 2008 the proscription was extended to Hezbollah’s Military apparatus including the Jihad Council.

Hezbollah is a deeply antisemitic organisation. Robert S. Wistrich devotes an entire chapter of his history of antisemitism, ‘A Lethal Obsession’, to Hezbollah.

After the terrible recent terrorist events in Manchester and London this display of extremism has no place on the streets of the UK.. Allowing this march to go ahead will send a worrying message to the UK’s Jewish community and call into question the commitment of the Mayor of London to eradicate extremism and anti Semitism

We the undersigned urge you to ban this march showing that your words are backed up by your actions.