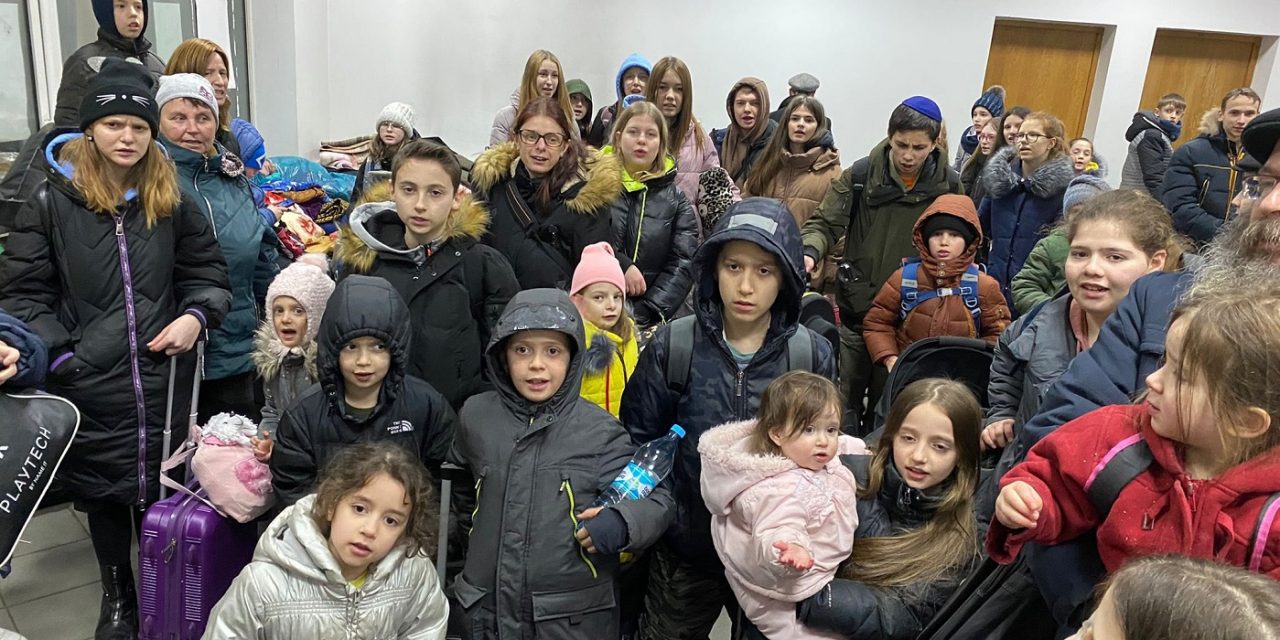 One hundred Ukrainian Jewish orphans are among refugees arriving in Israel this weekend from war-torn Ukraine.

The group of children crossed the border from Ukraine into Romania on Wednesday with the help of an Israeli diplomat after being rescued by buses from the northern Ukrainian city of Zhytomyr, making a stop in the western city of Chernivtsi.

Upon arriving at the country’s border with Romania, the children were greeted by the Israeli Consul in Bucharest Roni Shabtai who crossed into the Ukrainian side of the border to help expedite their evacuation and resettlement in Israel.

“On behalf of the Israeli government and the embassy, you have touched us profoundly,” Shabtai told the group as they arrived at the border Tuesday night.

“This is one of the defining moments of my life… Travel safely and carry on to a destination where you will have a much better life.”

The group is now expected to be on the first of three flights to arrive in Tel Aviv on Sunday.

More than 100 #Jewish orphans from Ukraine crossed the border this evening at a Siret crossing in #Romania. The 🇮🇱 Consul Roni Shabtai was there to receive them, and help them cross the border.

They will stay in Cluj for the next few days and from there will continue to #Israel pic.twitter.com/EASkSmna9e

The Israeli Embassy in Romania purchased supplies for the orphans, including blankets, socks, gloves and food.

The rescue mission was made possible thanks to the help of Gheorghe Flutur, the president of the Suceava County Council and a prominent figure in Romanian politics who harbors close ties with Israeli Ambassador to Romania David Saranga,

Flutur felt it was his moral obligation to aid Israel in its rescue efforts owing to his special relationship with the Jewish nation. His wife received cancer treatment at an Israeli hospital where he sat by her deathbed before she passed away four years ago.

Foreign Minister Yair Lapid issued praised the rescuers and welcomed the orphans who will now start a new life in Israel.

“There is no other country like it in the world. Six days into the horrendous war in Ukraine, there are moments for which words simply do not suffice. More than 100 Jewish orphans from Ukraine crossed the Siret border into Romania. The Foreign Ministry will accompany them until they arrive in Israel,” he said.

“Israel is the only country whose representatives have been stationed across the various border crossings for six days, reaching out to aid and rescue Israelis with dedication, under difficult conditions, with great pride… I am proud to be Israeli.”

The Jewish Agency for Israel is working together with Christians to help Jews trying to escape Russia’s invasion of Ukraine.

“We are in touch with different communities and leaders of these communities – rabbis. We [are] helping them organize buses to the border. And then [at] the border, we meet these buses and we help them to cross this border to accommodate them in the neighboring countries,” said Roman Polonsky, Jewish Agency Regional Director for the Former Soviet Union, Eastern Europe, and Germany.

“This situation in Ukraine is men ages 18 to 60, they cannot leave the country because they are drafted to the army. And it’s a great situation when the family could be split and they have to make their choice — wife with children and with elderly parents can go beyond the border, but men should stay there [in Ukraine],” Polonsky told journalists at a briefing hosted by Media Central in Jerusalem.

The heartwarming story of more than 100 Jewish orphans who were evacuated from Ukraine to Romania and will arrive soon in Israel thanks to Israel’s Consul@DavidSaranga @IsraelinRomania @AmirSagron pic.twitter.com/PzpDYPuytv

Complicating the effort is that many people didn’t bring family documents as they fled, and some don’t have passports, although the Jewish Agency has been able to mitigate some of the challenges.

“These people come, sometimes with only two bags and with [a] cat or dog in their laps and they need everything. They need clothes. They need medicine. They need food and we are trying to provide them with all our help, including, by the way, also psychological help and [medical] help,” Polonsky said.