The Israeli bride who turned her mourning into dancing… and invited the world.

Sarah Litman and Ariel Biegel, a Jewish Israeli couple, have become husband and wife just two weeks after Sarah’s father and brother were murdered by Palestinian terrorists. Their story is a testimony of how love overcomes terror.

On Friday 13 November, Sarah Litman was a bride-to-be preparing for her last shabbat as a single woman.

It was to provide Sarah with time to prepare for her Shabbat Kallah – the Sabbath celebration before a wedding – that the rest of the family headed out, by car, to visit the home of their in-laws-to-be. As they travelled a terrorist opened fire on their vehicle.

Natenal, Sarah’s 18-year-old brother was driving the car and as shots were fired at them, he swerved and crashed into some rocks. It was as he called for an ambulance that he was then shot dead along with their father, Ya’akov.

The other passengers in the car, Sarah’s mother and younger siblings sustained light injuries in the attack. 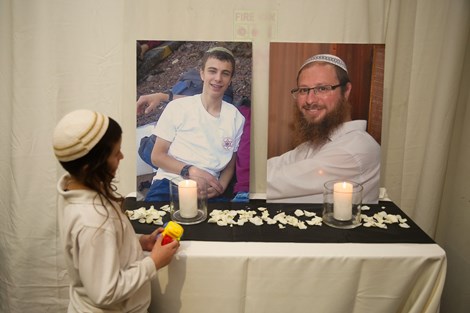 The pictures of Natanel and Ya’akov Litman displayed at the wedding.

“The pain is just so great,” said Sarah. “Almost everything was ready. We were all prepared by Friday. Netanel my brother suspected something, because he said he wanted to iron his shirt now, because next week the house will be very busy. And it turned out he was right,” she said, pointing to the many people who had come to join her, her mother, and her siblings in mourning the victims. “We thought we would be busy with celebrations, but we are busy with mourners.”

Despite the tragedy that struck the family and the grief they were going through, they were determined that the terrorists would not have victory over them.

“But as for you, you meant evil against me; but God meant it for good, in order to bring it about as it is this day, to save many people alive.” Genesis 50:20 (NKJV)

The wedding was postponed by just nine days, to allow for mourning, but now the whole of Israel was invited.

The public wedding invitation, which the couple posted on social media, began with the biblical quote: “Do not rejoice over me, my enemy, for I have fallen but I have gotten up” (Micah 7:8).

The story of Sarah and Ariel struck a chord with people around the world. There was even a fund set up for well-wishers who wanted to send gifts to the future husband and wife.

On Thursday 26 November, with hundreds of family and friends, and many more well-wishers in attendance, Sarah Litman and Ariel Biegel were married. 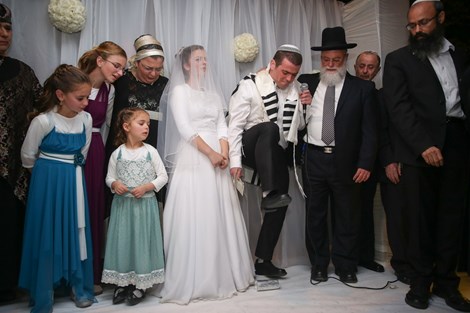 Ariel breaks the glass at the end of the ceremony.

The wedding was attended by Chief Rabbi of Israel David Lau and Chief Rabbi of Jerusalem Shlomo Amar. Sarah Netanyahu, the Prime Minister’s wife, arrived later and blessed the newlyweds, along with many other distinguished guests. 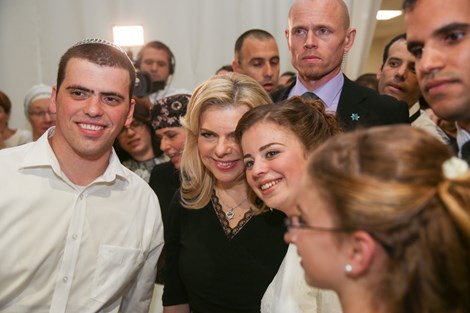 The newlyweds pose for a picture with Sara Netanyahu, wife of Prime Minister Benjamin Netanyahu.

There was also a live broadcast of the wedding. The video below shows an edited version of the event, from the gathering of guests, the moving chuppah ceremony and a few select dancing scenes.

This is also a great insight for those of us who are not so familiar with Jewish wedding traditions.

Around 200 Magen David Adom paramedics came to dance at the wedding. They included many friends of the late Netanel Litman, the bride’s brother, who had volunteered for the medical aid organisation.

Thousands of other guests came from all over Israel and the world to celebrate with the bride groom.

Among the well-wishers was Rabbi Mark Fishman of the Congregation Beth Tikvah in Montreal. The rabbi brought 11 of his congregation from Canada to Israel to join the wedding celebration.

“We went from a nation mourning the Litman family’s loss, to the a nation celebrating this joyous occasion,” Rene Moskowitz, who did not personally know the Litman family. “We all feel connected to to what this family has been through,” she told Tazpit Press Service. “It was our chance to help make this event a happy one.”

The newlywed’s thanked the public who came to support. “Until two weeks ago, nobody knew or was interested in me and Ariel, then one minute on Friday – at the height of preparations – my father and brother were murdered by a heinous terrorist,” said Sarah Litman. “There is not a moment in which I do not miss the smile of Netanel and the humility and modesty of my father, it will always accompany me. 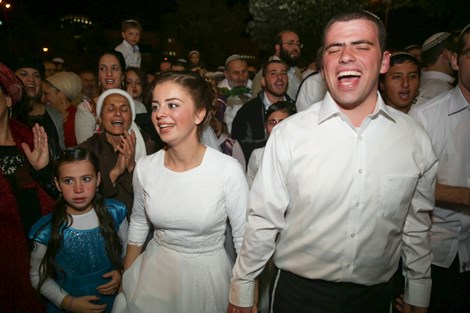 “But precisely in the midst of the pain, in the month of bravery before Hannukah, we will spread, together with all of the people of Israel, an immense light of happiness, giving and love which was bestowed upon us by the nation of Israel. The main thing is not to fear at all.”