Ukraine: Another desecrated Holocaust Memorial and the heart-breaking story behind it

The story behind the monument is truly heartbreaking. And it is sad to see the anti-Semitism which fuelled the Nazi’s hatred of the Jews is showing itself again by attempting to destroy the memory of those it killed.

In 1939, Kiev had (and to a much lesser degree still has) one of the oldest, largest and historically most important Jewish communities in the world.  There were approximately 224,000 Jews living in Kiev at that time.

During World War II, Germany invaded the Soviet Union and when the Nazi’s reached Kiev in 1941, the Jewish community predictably became a target for the Nazi’s genocidal zeal.  Unfortunately, about 50,000 Jews were still left in Kiev when the Nazi’s arrived.

On 29 and 30 September 1941, Kiev’s Jews were rounded up under a vaguely veiled pretext of deportation to somewhere else.  Instead of being deported, they were marched to a ravine outside the city called Babi Yar.  There, they were forced to undress and line up in “batches” at the edge of the ravine.  They were then mowed down by machine guns.

In just two days, 33,771 Jews were murdered in this manner. It is regarded as the single largest massacre of its kind.

As with other sites of their mass killings, the Nazis sought to cover up their murders when they realised they had to retreat. So, they exhumed the grave two years after the mass killings using the Sonderkommandos, which refers to the work units of Jewish prisoners who were used to clear out the dead bodies from the gas chambers. These Jewish prisoners (along with non-Jewish political prisoners) were forced to exhume the bodies and burn them on makeshift racks made of railway tracks in an attempt to hide the evidence.

The Nazi’s not only murdered these innocent men and women, but they then tried to erase their memories using the hands of their Jewish brethren.

Thankfully, their memories live on.  The Nazi’s failed to hide the evidence. They had recorded in great detail the initial massacre, including the exact number killed, along with photos. There were also eye witness accounts, not only from those who saw or participated in the massacres, but also those who survived them.

Fifty years after the massacre, in 1991, a Menorah was erected to honour the memory of the around 100,000 in total who lost their lives at Babi Yar.

Our story doesn’t end there. As you know, hatred for the Jews did not die out with the Nazis.  And it is this Menorah, a symbol of remembrance, which is now under threat.

This week, the Menorah at Babi Yar was vandalised for the sixth time.  The perpetrators put tyres around the menorah, covered it in flammable liquid and set it alight.  This was not the work of disgruntled youths, but a deliberate act of hatred from anti-Semites. 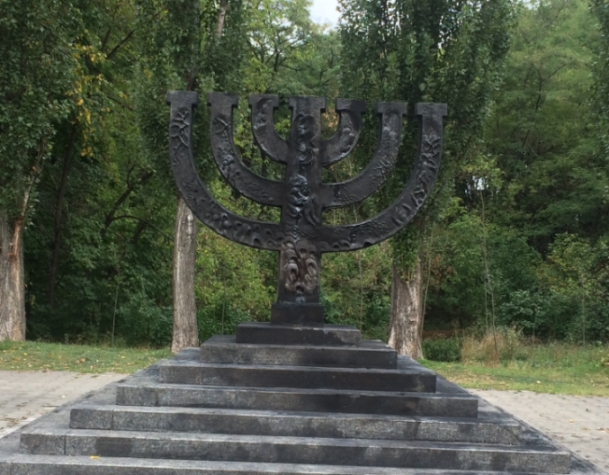 Fortunately a security guard at a nearby Orthodox Church noticed the fire and quickly put it out.

It is hard to understand the mentality of those who commit such acts. A monument that honours the memory of tens of thousands of innocent people who were murdered in cold blood should be one which is respected by all people.

However, this, and many other acts across our continent reveal that the same spirit, which ran rampant throughout Europe in WWII, is unfortunately alive and well today. And it is doing so with renewed vigour.

Let us continue to pray against this hatred and may the memories of those lost in the darkest days in our history long be remembered.

If you have not done so already, please consider signing our “Christians Against Anti-Semitism” petition to take a practical step on behalf of the Jewish people.  It only takes a moment and adds your voice to a growing movement.