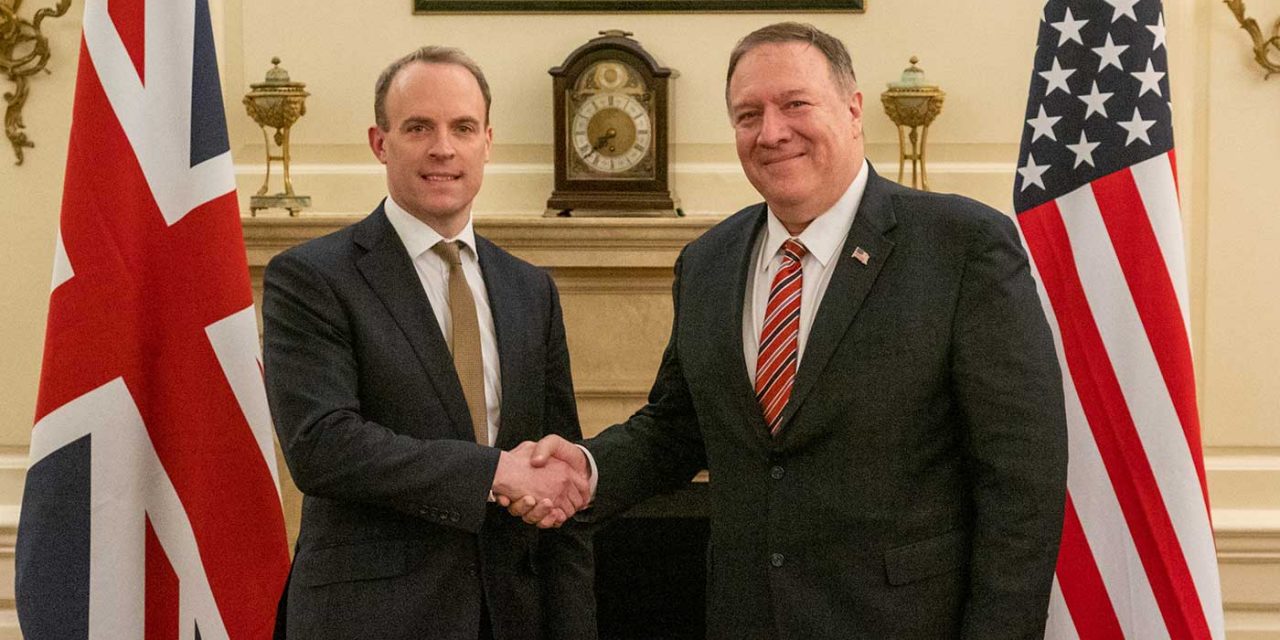 The UK’s Foreign Secretary has welcomed President Trump’s “Deal of the Century”, saying it lays the foundations for a “first step on the road back to negotiations” between Israel and the Palestinians.

President Trump released his peace plan on Tuesday drawing a mixture of reactions. It was always going to be interesting to see how governments around the world would react. The UK is positive.

Foreign Secretary Dominic Raab said, “We welcome the release of the United States’ proposal for peace between Israelis and Palestinians. This is clearly a serious proposal, reflecting extensive time and effort.”

He stated once again the UK’s desire to see a peace agreement between Israel and the Palestinians and said that “peaceful coexistence could unlock the potential of the entire region, and provide both sides with the opportunity for a brighter future.”

However, he stressed that it was “only the leaders of Israel and the Palestinian territories” who can “determine whether these proposals can meet the needs and aspirations of the people they represent.”

He finished by encouraging both parties to give Trump’s peace plan “genuine and fair consideration”, looking at the plan as the “first step on the road back to negotiations”.

Clearly, this is a peace plan that favours Israel more favourably than all previous peace plans. Therefore, it is hard to see the Palestinians accepting the deal in its current form. The Palestinians rejected the plan before it had even been announced. This should not be seen as a sign that the deal itself is bad, but that the Palestinian leadership has been consistent in its rejection of peace, regardless of who puts the plans forward.

In response, US Secretary of State Mike Pompeo urged the Palestinian leadership on Wednesday to provide a counteroffer to the “Deal of the Century” rather than reject it outright.

“We are truly confident that this is a plan that is good for everyone,” he told reporters before taking off to Britain on a five-nation tour. “They are free to come up with a counteroffer if that’s what they think is appropriate. We’d look forward to that.”

“We’re prepared to listen, and I know the Israelis will be prepared to sit down and negotiate on the basis of the vision that the President laid out,” he added.

Pompeo expressed his disappointment that the Palestinian Authority quickly rejected the plan and called for a “Day of Rage” instead, rather than take a deal that provides an “enormous opportunity for a better life for the Palestinian people.”

“It’s the first time the Israelis have ever conceded to a map that actually lays down real outlines of what this will look like and what this means, and it provides a clear pathway for a Palestinian state. This is a real vision.” Pompeo said.

“We hope that all the parties – all the Palestinian people both in the West Bank and in Gaza – will consider it thoughtfully and move forward on this basis,” he added.

As an organisation, Christians United for Israel (CUFI) has also welcomed President Trump’s peace plan as the most pro-Israel peace plan ever put forward.