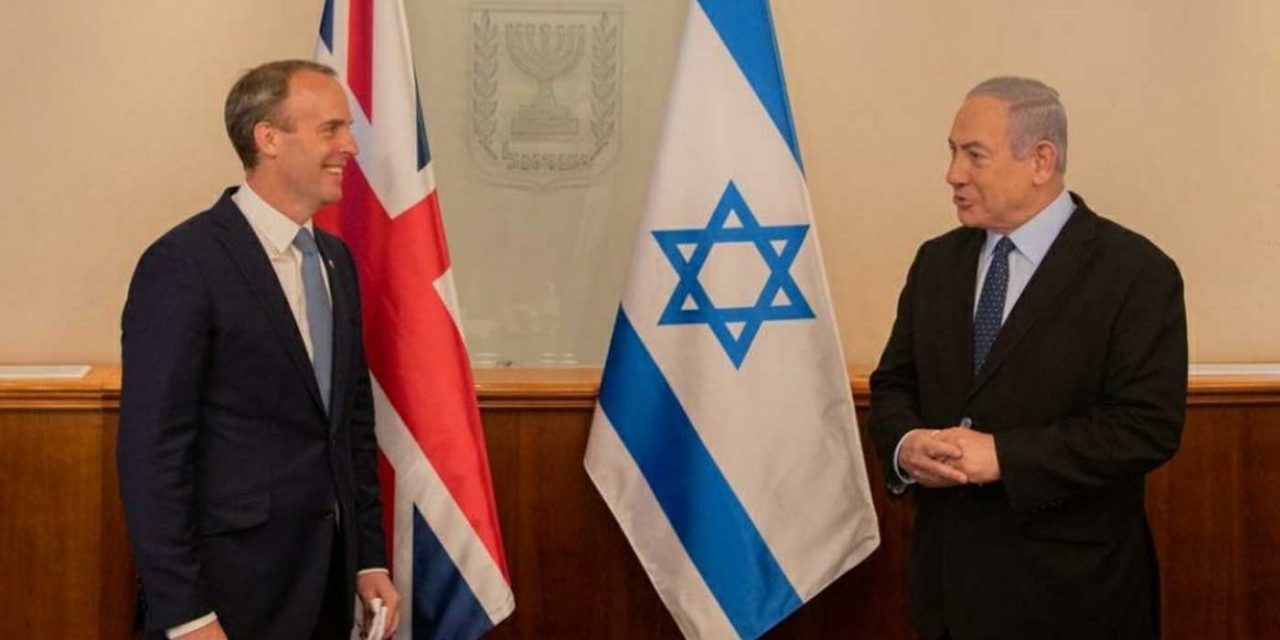 The UK’s Foreign Minister Dominic Raab landed in Israel on Tuesday, 25th August, to meet with leaders of Israel and Palestinian officials.

The purpose of Dominic Raab’s visit to Israel was in part to strengthen ties between the two countries, but also for Mr Raab to encourage peace between Israel and the Palestinians. However, it was clear that the UK’s weakness towards Iran and their decision to abstain from a crucial vote at the UN which lifted the arms embargo against the Iranian regime was top of the agenda. Every Israeli minister that Raab spoke to mentioned it to him.

Raab landed in Tel Aviv and met with Israeli Foreign Minister Gabi Ashkenazi where the pair discussed “Israel bilateral relations as well as regional issues” along with “trade, the economy and joint research into Corona”.

Ashkenazi told Raab that he was “disappointed” with the UK’s decision to abstain.

“Lifting the embargo will lead to accelerated arming by Iran,” cautioned Ashkenazi, during the meeting.

The UK-Israel relationship is as strong as ever. I expressed 🇬🇧 enduring friendship to Foreign Minister @Gabi_Ashkenazi this morning. We discussed the significance of normalisation of 🇦🇪-🇮🇱 relations, and efforts towards greater peace in the Middle East pic.twitter.com/WCWKpujZW4

Mr Raab also met with Israel’s Defense Minister Benny Gantz. Raab’s Twitter account said the pair discussed “regional security” and that the UK welcomed “the suspension of annexation” and reaffirmed the UK’s “commitment to the security of our friend, Israel”.

However, Gantz also reportedly made similar comments concerning Iran, saying, “We must find a way to reactivate the arms embargo on the Iranians.”

The UN Security Council voted to end its arms embargo on Iran, the world’s leader of state-sponsored terrorism which has a stated aim of wiping Israel off the map. This vote will now allow Iran to purchase and develop weapons without restriction, something that is deeply concerning to Israel and other nations in the region. It is understandable then that the UK’s cowardly decision to abstain instead of standing up to Iran has been a key topic for Israeli politicians on all sides.

Today I discussed regional security during my meeting with Alternate PM and Minister of Defense @gantzbe. I welcomed the recent suspension of annexation & reaffirmed UK commitment to the security of our friend, Israel pic.twitter.com/FHuXhSce9v

Prime Minister Netanyahu was a lot more direct with his comments towards the UK Foreign Minister.

Netanyahu told Raab that Israel expects the UK to change its stance toward Iran and join the US push for restoring sanctions, according to a statement from the Prime Minister’s Office.

This is something we at Christians United for Israel agree with wholeheartedly. The UK’s position on Iran MUST change! We must stand shoulder to shoulder with Israel and America.

Dominic Raab also met up with US Secretary of State Mike Pompeo in Jerusalem.

Valuable discussion with @SecPompeo in Jerusalem on mutual concerns and threats to regional stability, alongside the importance of the Israel-UAE deal. https://t.co/kVLtZjdhbL

Pompeo said he was “glad” to meet with Dominic Raab and said it was an “important opportunity to discuss President Trump’s Vision for Peace and Iran.”

Raab said he had “valuable discussions” with Pompeo and said the pair discussed the “importance of the Israel-UAE deal” as well as “mutual concerns and threats to regional stability”.

It is wonderful that the relationship between Israel and the UK is strong in areas of trade and security, however, it is a great shame that the UK is so weak in the face of Iranian tyranny.

We are praying and taking action in the hopes that the UK government they will change to stand up for what is right.