Anti-Semitism in the UK reached “unprecedented” levels in 2016, after a rise of 36 percent in the number of incidents.

Following Thursday’s release of its annual figures, the Community Security Trust (CST) said there were now more than twice as many anti-Semitic incidents per month than four years ago, with the level of hatred eclipsing that seen during the Gaza War in 2014.

The CST, which works with police to gather data, said there were 1309 incidents reported last year – the highest on record and a increase of 36% on 2015. This compares to 960 incidents in 2015 and 1,182 the year before, when Israel launched military action against militant groups in the Gaza Strip.

According to the CST’s report:

Mark Gardner, from the CST, said the increase could be partly explained by a greater willingness to report incidents to the police.

However, he said: “Racists, including anti-Semites, feel emboldened, feel encouraged, at this moment in time, for a whole range of reasons, to come out with their hatred.

“They used to keep it under the ground. Now they’re coming out. A lid has been lifted off.” 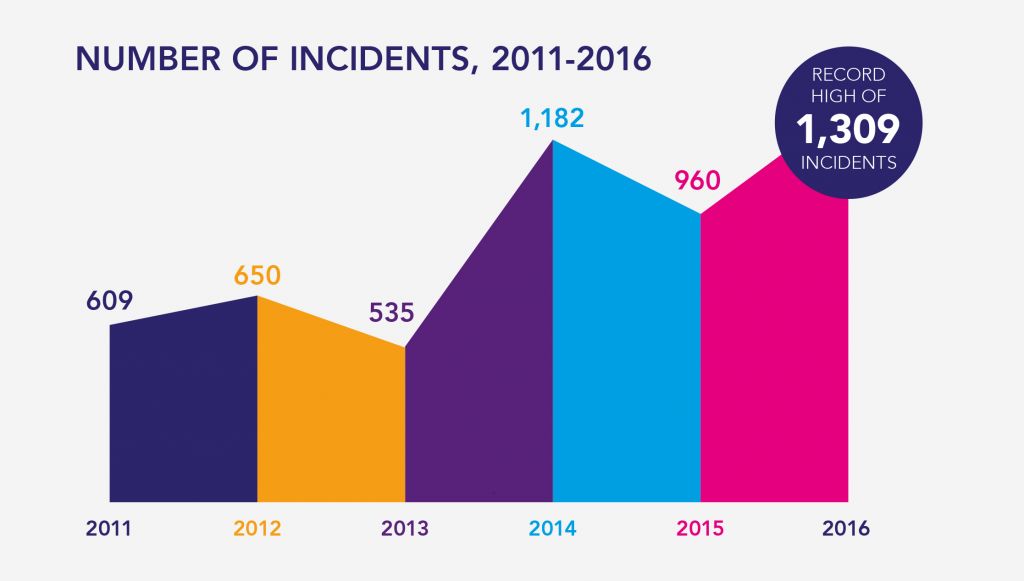 Ms Rudd described anti-Semitism as a “deplorable form of hatred”.

She said: “It is vital we ensure the safety and security of our Jewish community and this government will continue to do all we can to stamp out these vile attacks and encourage those who experience them to come forward.”

Communities Secretary Sajid Javid added: “Anti-Semitism must be understood for what it is – an attack on the identity of people who live, contribute and are valued in our society.

Mayor of London Sadiq Khan reacted to the report saying: “This significant rise in deplorable hate crimes against Jewish Londoners is shocking and deeply concerning. Any type of anti-Semitic offence is unacceptable in our city.

“We need to send the message far and wide that anti-Semitism can never be justified and we’ll act to stamp out it out whenever it rears its ugly head.”

“I have adopted a strict zero-tolerance approach to anti-Semitism and all hate crime”.

More than half of all UK incidents were reported in London, although for online incidents, such as hateful messages left on social media sites, London may represent the location of the reporter, not the offence.

Overall, there was a huge 55 percent increase in the amount of online abuse being recorded, with 287 incidents overall.

More worryingly, the number of incidents classed as ‘abusive behaviour and threats’ was 1,006, which is “the highest CST has ever recorded in those categories”.

There were 107 ‘violent anti-Semitic assaults,’ the highest level since 2010, but none were classed as ‘extreme violence,’ meaning grievous bodily harm or threats to life.