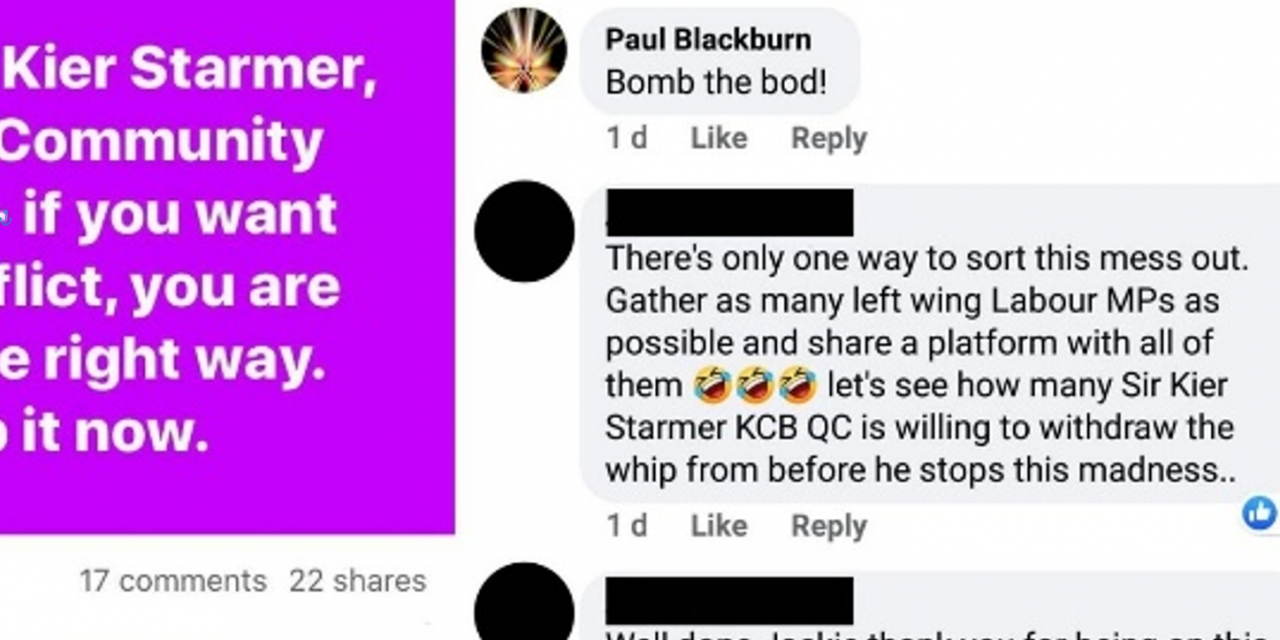 A threat to bomb the Board of Deputies of British Jews has been reported to the police, says the Jewish News.

Communal leaders called on Facebook to “wake up” and take action against after the violent comment was made by an unknown user beneath a post written by an expelled Labour member.

Jackie Walker, who was kicked out of the the party in March 2019, posted on her Facebook account, saying: “Dear BoD, Kier [sic] Starmer, ‘Jewish Community Groups’ – if you want race conflict, you are going the right way. Stop it now.”

In the comments under her post, a user called Paul Blackburn wrote: “Bomb the bod”.

When told the remark is “direct incitement to violence”, he said “f***** right it is! The bullet & the bomb is the only way this country will ever be free!”

NEW: @BoDPres Marie van der Zyl urges @Facebook to “wake up” to antisemitism, islamophobia and extremism on its platform, as “bombs and bullets” threat is made to the Board of Deputies online.
Read in full: https://t.co/dXEiifG4pR pic.twitter.com/bMJmVqMZNo

Jackie Walker was expelled over charges of making comments which were “grossly detrimental” to the party.

Board president Marie van der Zyl said Walker, who had “repeatedly baited the Jewish community continued her hateful rhetoric against the Board of Deputies, making a veiled threat”.

She added, “normally, we would ignore such statements as the ramblings of someone who has long been discredited, but this time her statements led to a direct threat to our organisation”.

She confirmed the Board have informed the police and Community Security Trust.

Van der Zyl said added, the situation was made “a thousand times worse” after “when alerted to this situation, Facebook took no action” with a staff member at the firm saying “it doesn’t go against any of our Community Standards.’”

She added, the incident demonstrates “Facebook’s Community Standards are hopelessly flawed or those employees responsible for implementing them are extremely ill-trained”.

.@BoDPres has urged ‘swift and decision action’ following reports that Labour MPs have addressed an online meeting of activists which included figures expelled from the Labour Party. Full statement: pic.twitter.com/THMq7JhewS

The CST said it “can confirm we have been aware of this threat since it was first reported and have been working with
Board of Deputies to assist their investigation and advise regarding their security.”

In the Bible, God makes it clear that He will bless those who bless Israel and curse those who curse Israel. This promise is seemingly ringing true for Unilever, the parent...
Read More
Share
Tweet
Email
More
354 Shares